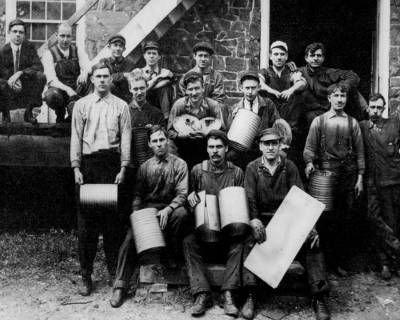 E.I. du Pont de Nemours & Company was established in 1802 by Pierre Samuel du Pont de Nemours (1739-1817) and his son Éleuthère Irénée du Pont (1771-1834). This collection of more than 1250 discrete photographs depicts the landscape and buildings at or near the company's explosives manufacturing plants along Brandywine Creek near Wilmington, Delaware. Approximately 900 images depict powder yard sites, including the DuPont Experimental Station, either during the mills' final decades of operation or prior to, during, and after excavation and restoration work on the site in the 1950s and 1960s. Most of the remaining images depict the worker communities which surrounded the powder yards.

E.I. du Pont de Nemours & Company was established in 1802 by Pierre Samuel du Pont de Nemours (1739-1817) and his son Éleuthère Irénée du Pont (1771-1834). The du Ponts purchased the Eleutherian Mills site on the banks of Brandywine Creek just north of Wilmington, Delaware. In 1813, E.I. du Pont expanded downstream by purchasing what became Hagley Yards. During wartime the company was a major supplier for the United States government. During peacetime, the company marketed their product towards sportsmen and hunters. Throughout much of the nineteenth century, the powder-making operation on the Brandywine expanded as the company acquired many buildings that had begun as other industrial sites. At one time, the Brandywine works comprised four main yards: Eleutherian Mills (also known as Upper Yard), Upper Hagley Yard, Lower Hagley Yard, and Lower Yard, which was located on the eventual site of the DuPont Co. Experimental Station.

By the early twentieth century, the company had begun to shift its focus away from gunpowder production and towards chemistry innovations. In 1903, DuPont Co. established an experimental laboratory in the Rokeby Mill building downstream from Hagley Yard, and, after that building burned down in 1906, moved its facilities across the river to form the Experimental Station. The company closed the Brandywine powder yards in 1921, having remained open for the course of the First World War, and in 1926 the company formally dissolved its entire powder production unit.

The industrial villages along Brandywine Creek grew up in tandem with the powder mills and other nearby mills, and they were populated largely by Irish, French, and Italian immigrants and their descendants. By the 1890s, several distinguishable neighborhoods existed near the powder yards. On the west bank of Brandywine Creek, these included Wagoner's Row, the Upper Banks, Free Park, Squirrel Run, and Henry Clay (which encompassed Breck's Lane, Creek Road or Main Street, and Rising Sun Lane). On the east bank, there was Chicken Alley, Duck Street, Charles's Banks, and Walker's Banks.

The community was served by the Wilmington and Northern Railroad and, beginning in 1907, trolley service in Henry Clay was provided by the Peoples Railway. In the 1890s, the Breck's Mill building in Henry Clay became known as the Hagley Community House and was a community focal point, serving as a recreation center and social hall. The Eleutherian Mills residence on company property likewise served for a time as a DuPont Co. employees' clubhouse and was converted into military barracks during the First World War. The villages largely diminished with the closing of the powder yards.

In 1952, in the same year the company celebrated its 150th anniversary, du Pont family members donated much of the land on which the former powder mills stood, and the company created an endowment for the Eleutherian Mills-Hagley Foundation for the purpose of preserving the site and establishing a museum. The site opened as a museum in 1957, and in 1966 the museum property was designated as a National Historic Landmark.

The arrangement by subject as the materials were found in the Hagley File (Accession 1969.001) was maintained during processing. The only exception are images identified as originating from collections previously digitized and which were already available in the Hagley Digital Archives, but which contain notes or additional information written by Hagley staff. These images are filed alphabetically at the end of the collection by the title of the originating collection.

This collection consists of original photographs, copy work from other Hagley Museum & Library collections, and items loaned for copy to Hagley Museum & Library from various individuals. It comprises more than 1250 discrete images depicting the landscape and buildings at or near the DuPont explosives manufacturing plants along Brandywine Creek near Wilmington, Delaware. Approximately 900 images depict powder yard sites, including the DuPont Experimental Station, either during the mills' final decades of operation or prior to, during, and after excavation and restoration work on the site in the 1950s and 1960s. Most of the remaining images depict the worker communities which surrounded the powder yards.

The dam, entrance area, glaze mill, and rolling mills at the Lower Yard of the DuPont Brandywine works are also depicted in the collection.

The collection also contains photographs of archaeological work conducted in the 1950s at Eleutherian Mills and at the Birkenhead rolling mills and the Dye House and Picker House in Hagley Yard. In addition, there are images of powder yard and other workers (including office staff and female powder workers during World War I), powder wagons, the company's Experimental Station, proposed museum plans, the 150th anniversary ceremonies of the DuPont Company held in 1952, and reproductions of maps of the area from various dates. There are also photographs of the aftermath of explosions that occurred at the powder yards in 1890, 1920, 1921, and possibly 1896.

Images of the worker communities near the powder yards form the other main subject of this collection. The collection includes depictions of worker housing, du Pont family homes, churches, taverns, schools, and other facets of social and work life in the area.

Images of residents include recreational scenes of ice skating, sledding, swimming, and canoeing as well as group photographs of the Clay Target Club, bands (including Alfred I. du Pont's Tancopanican Band), and the Hagley basketball team. There are also photographs of Alexis I. du Pont School students and faculty.

The materials in this collection were selected by Hagley staff for subject matter from the former Hagley File subject photograph file maintained by the former Hagley Museum & Library Pictorial Collections Department. Images with relevant subject matter that could be identified as being donated or loaned by individuals interviewed for Oral histories on work and daily life in the Brandywine Valley (Accession 1970.370) were transferred into a separate collection, Brandywine Valley oral history interviewees' photographs (Accession 2017.225).