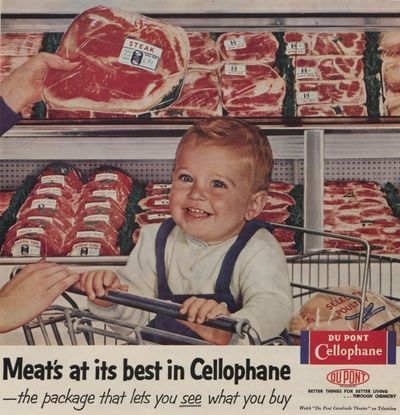 E.I. du Pont de Nemours & Company is a chemical company more commonly known as the DuPont Company. It was established in 1802 and began by manufacturing gunpowder, later moving into chemical compounds. At the beginning of the twentieth century, DuPont had the need for more advertising as the company began expanding its product line beyond gunpowders and explosives. Between 1907 and 1909, an Advertising Division was formed within the Sales Department; a separate Advertising Department was established in 1921. This collection consists of background research files on ad campaigns run in individual industrial departments for various products and to promote the company as a whole.

DuPont's first advertisement was an item placed in a newspaper by E.I. du Pont in October 1804 announcing the availability of his gunpowder. In 1819, du Pont began advertising in the Philadelphia Gazette and Daily Advertiser. This campaign proved so successful that he began an extensive handbill advertising program. However, during the nineteenth century, the company's sales grew without much advertising, but as DuPont began to diversify in the twentieth century, it needed more advertising. Around 1909, director William Coyne (1870-1954) asked DuPont employee George H. Kerr (1860-1949) to survey other large industrial companies' advertising and publicity practices. Kerr engaged Samuel W. Long (1875-1958), a Philadelphia advertising and publicity agent, and spent about a year collecting and analyzing the data. In April 1911, an Advertising Division was established within the Sales Department, under George Frank Lord (1874-1950), formerly of the J. Walter Thompson agency. S.W. Long was engaged in handling publicity on retainer. Long mostly dealt with powder and dynamite advertising but also dealt with public relations issues emanating from the 1911-1912 antitrust prosecution. Publicity was spun off to a new Publicity Bureau in 1916.

Throughout World War I, DuPont expanded its product line to include dyes, plastics, rubber-coated fabrics, acids, heavy chemicals, pigments, paints, and varnishes. In 1921, the company was reorganized into autonomous operating or industrial departments based on product lines and coordinated by a central corporate office. Advertising became a central staff or auxiliary department. Advertising Department representatives in each of the industrial departments worked with the central staff in creating ad campaigns.

There were special units for exhibits and trade shows, motion pictures, commercial art, direct-mail advertising, and export advertising within the Advertising Department. The department maintained its own printing plant. In 1916, the company established a permanent exhibit space opposite the Steel Pier in Atlantic City to showcase its products on the natural assumption that they would be seen by tourists and conventioneers from all over the country. This facility was discontinued in 1955 after Atlantic City began to decline and television provided a more effective advertising medium. During the same period, the company also maintained smaller display facilities at its Wilmington headquarters and later at its New York office in the Empire State Building. The department also published two employee and promotional magazines, the DuPont Magazine beginning in 1913, and La Revista DuPont for the (largely Latin American) export market in 1931.

The department also used outside advertising agencies, principally Batton, Barton, Durstein & Osborne (BBDO), N.W. Ayer & Son, and the Rumrill Company. BBDO was first hired in 1929 and was engaged continuously through the 1960s. The agency was responsible for the company's famous "better things for better living" slogan.

Beginning in May 1926, the department held regular semiannual meetings called "advertising clinics," at which advertising would be analyzed on a company-wide basis and specific problems in each product line identified. The clinics featured a keynote address by a senior company official and individual presentations by department personnel, representatives of advertising agencies, and academic experts. The last advertising clinic was held in the fall of 1958. DuPont was primarily a manufacturer or producer of intermediate goods, such as industrial explosives, yarns, films, pigments, and bulk chemicals. As such, a large part of its advertising activity was aimed at industrial buyers through direct contact, trade magazines, and trade shows. However, DuPont made a few products that were sold directly to consumers, initially sporting and shooting powders and later paint and anti-freeze. Consequently, the advertising campaigns for these products have often left the most tangible evidence. DuPont also generated a large amount of advertising designed to persuade consumers that finished goods like apparel, domestic utensils, carpeting, or packaging made with DuPont materials were superior to those of its competitors.

The Advertising Department was also charged with creating goodwill and a favorable image for the company, which had been tarnished by the Nye Committee's "merchants of death" investigation of munitions companies during World War I. Advertising tended to present the company as a fountainhead of technical innovations that would improve the quality of life for the average citizen. This was particularly apparent in the company's public displays, particularly those at major expositions from the 1930s through the 1960s.

Public opinion was also a major factor behind the company's move to radio and television advertising. The first fully sponsored program was the Cavalcade of America, which began as a radio show in October 1935. Transferred to television in October 1952, the program ran 30-minute stories about historical figures who had made significant contributions to American life. The show went through several changes in format and presentation. It was renamed DuPont Cavalcade Theater in August 1955, and DuPont Theater for the following season. The program was replaced for the 1957 fall season by the Du Pont Show of the Month, a 90-minute live dramatization of popular novels and short stories or abridged versions of plays and motion pictures that ran through 1961. From 1954 to 1957, DuPont also sponsored a 15-minute program of sports scores and football predictions that showcased its "Zerex" and "Zerone" anti-freeze; research has shown that automotive products were bought almost exclusively by men. The first season was hosted by Norman Sper (1895-1955). When he passed away, Frank Leahy (1908-1973), a former University of Notre Dame football coach, was hired to take his place. The company carefully monitored the performance of the programs and commercials and engaged in extensive psychological testing, opinion polling, and rating reviews.

Click here to view the organizational charts of the Advertising Department, 1933-1967.

The Advertising Department records are arranged into series by department, maintaing the original order from the DuPont Company. The records are not comprehensive but cover advertising campaigns during discrete periods in individual industrial departments. The collection consists of background research files on ad campaigns run for various products and those run to promote the company as a whole. The materials included are correspondence, research reports, memoranda, salesmen's bulletins, drafts of advertisements, and finished ads and promotional materials. There are also several photographs in the collection.

Theses records date from 1807 to 1971, with the bulk of the records falling into the 1930s through the 1960s. Some of the records (particularly the materials from the advertising files) pre-date the establishment of an autonomous Advertising Department in 1921.

The eleven series are as follows. A detailed description is present in the scope and content note for each series.

Museum Collections and Exhibits Department artifacts are accessible by appointment only. Please contact the museum registrar via askhagley@hagley.org in advance of research visit.

A detailed listing of other advertising materials of the E.I. du Pont de Nemours & Co. in the Hagley manuscript collections is available at the repository or by request.