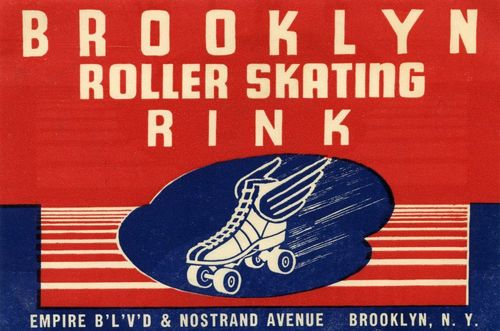 Genevieve Pittner (1917-2007) of Monroe, Michigan, collected roller skating rink stickers between 1941 and 1942, amassing a large collection by exchanging stickers by mail with other collectors. She may have been a member of the Universal Roller Skating Sticker Exchange, a national network of sticker enthusiasts who traded stickers amongst each other.

This collection consists primarily of roller skating rink stickers collected by Genevieve Pittner during the World War II era. A large album contains most of the stickers in the collection; stickers are attached to album pages and arranged alphabetically by state. Most of the U.S. states are represented, with especially good coverage of California, New York, Ohio, and Pennsylvania. A photograph, presumably of Genevieve Pittner, appears on the first page of the album. In addition to the album, there are also a number of loose stickers; many of these are stamped or inscribed on the reverse with the names and addresses of persons interested in exchanging roller skating rink stickers with others. Finally, there are four photographs showing unidentified people roller skating.

The collection also includes notes and correspondence from other sticker traders received by Pittner; this correspondence typically accompanied stickers traded by mail. Some of the notes are generic and impersonal, but many show a strong cameraderie among the network of sticker collectors, and indicate that, while on vacation or traveling, skating enthusiasts would make a point of visiting the "home rink" of other skaters with whom they've corresponded and traded stickers. In some notes, the wartime atmosphere is apparent; one sticker collector writes that he must give up collecting because he's been drafted into the armed services; another writes about how difficult it is to get to the roller skating rink due to rationed gasoline.