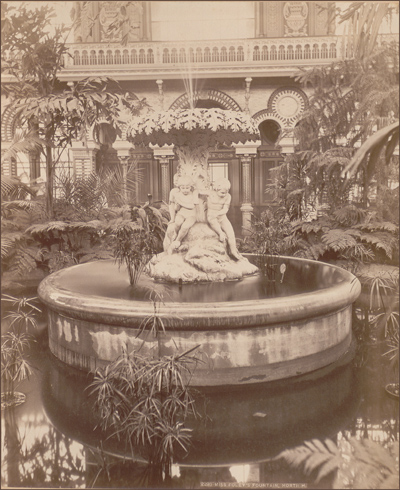 The Centennial International Exhibition of 1876 celebrated the one hundreth anniversary of American Independence. Held in Fairmount Park in Philadelphia, it was the first major U.S. world's fair. This collection contains Centennial Exhibition photographs, albums, scrapbooks, and ephemera

The Centennial International Exhibition of 1876 celebrated the one hundreth anniversary of American Independence. Held in Fairmount Park in Philadelphia, it was the first major U.S. world's fair. The Centennial Exhibition opened on May 10, 1876 and closed November 10th. Nearly ten million visitors attended the fair in that time. The fairgrounds were made up of five main buildings, as well as some 250 pavilions and auxiliary structures, including twenty-four state buildings, which were each designed in a regional style.

The collection consists of photographs and ephemera pertaining to the Centennial International Exhibition. The majority of photographs in the collection are in two large albums. The first of these albums focuses on buildings at the exhibition. These prints include images of each of the five main buildings at the exhibition, both interior and exterior images. Many images feature the buildings under construction, especially focusing on the Main Exhibition Building, Machinery Hall and a series of images of the Photographic Association Studio. Interior construction photographs feature the fountain in Horticultural Hall, installation of floors, assorted areas of scaffolding and include railroad tracks and railcars moving through Machinery Hall and the Main Exhibition Building. Other buildings on the Centennial Grounds, including state buildings, Judges Hall, and other corporate pavilions are also featured, as are assorted views of the grounds. The second album features displays inside the exhibition buildings. Large, ornate display cases appear in most of these photographs, some filled with merchandise and some empty but surrounded by packing crates. Items being displayed range from furniture to locomotives to agricultural machinery. Sculptures, statues and other art objects from Memorial Hall are prominently features in several images. Several other photographs focus on the large Corliss steam engine at the center of Machinery Hall.