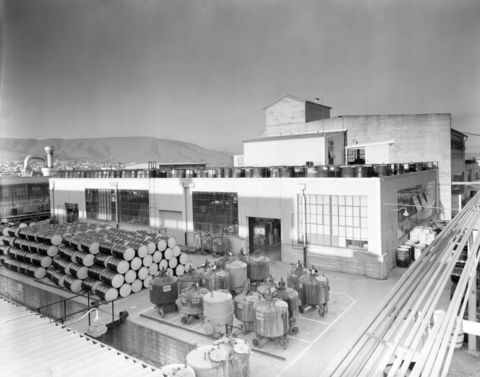 DuPont Company South San Francisco Plant manufactured and packaged DuPont finishes such as Lucite paint, Duco laquers and Dulux enamels. The plant began operation in 1935. Lucite was developed in 1931. Because Lucite is clear and transparent, it is used as a glass substitute and in lenses, medical and dental applications, and paints. Plastics became increasingly important throughout World War II and remained important during the postwar period.

In 1949, the DuPont Company created the Polychemicals Department, which went on to create Delrin, Elvax, and Zytel. Lucite was eventually used in paints for automotive finishes. Lucite paint replaced the Duco and Dulux paints which DuPont had created in 1920 and 1926, respectively. Duco was a durable quick-drying lacquer used for appliances and as the standard finish for GM vehicles. Dulux was glossier, which made it more popular than Duco.

Lucite paint was introduced in the 1950s and was less expensive and more durable than its predecessors. In the 1960s, Lucite paints were marketed as interior and exterior house paint. Increased competition throughout the 1970s pushed Lucite house paint manufacturing to cease completely by 1983.

The collection consists of photographs, films and ephemera from the DuPont Company South San Francisco Plant. Images include photographs and negatives of the plant's construction in the mid-1930s and exterior views of the office, change house, tank farm and other buildings taken in 1945 (prior to the plant's expansion). The collection also contains a number of films regarding work place and home safety subjects from the early 1960s. They feature interior and exterior views of the plant and show workers practicing safe lifting, climbing, carrying and clean-up techniques. Several of the films concentrate on fire safety at work and in the home: These feature fire drills at the plant, an employee checking his own home for fire hazards, and several employees demonstrating proper use of fire extinguishers and fire hoses at the plant. The collection also includes several programs from the plant's "25 Year Club," an undated brochure describing the plant, and a printing plate used to print the company name on letterhead.