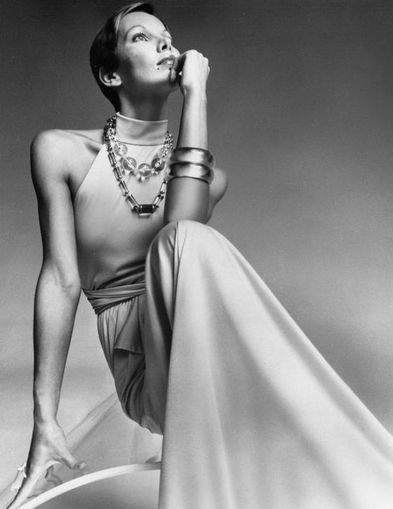 In 1952, the DuPont Company organized a Product Information section within the Public Relations Department. Its main purpose was to create news releases accompanied by photographs that would be run editorially by trade journals and newspapers to create inexpensive publicity and indirect advertising. This collection consists of the Fabric master files and Textile reference files maintained by the Product Information Department. The majority of the photographs in the Fashion master files are posed fashion images featuring women modeling clothing made from DuPont synthetic fibers. There are images that feature children’s and men’s clothing as well. The fashion categories have been used as subseries and are as follows: Children and teens; Dress wear; Exports; Home furnishing; Home sewing/fashion fabrics; Hosiery; Intimate apparel; Italian couture; Knit wear; Men’s wear; New York couture; Paris couture; Sportswear/activewear; Swimwear; Touring kits; and Uniforms. Textile reference files contain press releases organized by fiber and then chronologically. The subseries are: Acetate, Dacron, Lycra, Multi-Fibers, Nylon, Orlon, Rayon, Reemay and Zepel.

In 1952, the DuPont Company organized a Product Information section within the Public Relations Department. Its main purpose was to create news releases accompanied by photographs that would be run editorially by trade journals and newspapers to create inexpensive publicity and indirect advertising. To be used, the news releases had to include genuinely interesting information about a DuPont product, its development, manufacture, or applications. Direct commercial promotions of products, however, remained the work of the Advertising Department.

Public Relations staff members in Product Information were assigned to specific operating departments, and they reported jointly to the heads of PR and the specific department. Product Information for Textile Fibers was handled out of that department's office in New York City's Empire State Building. This section also issued photographs and press releases for editorial use. These were designed to establish and strengthen in the reader's mind the connection between DuPont, as a maker of fibers, and the garment and fashion industry.

This collection has been organized into three series: Fashion master files, Textile reference files, and Motion picture films and videos.

Fashion master files contain photographs and press releases maintained by the Product Information department. These master files were organized first by clothing function and then by date. The majority of the photographs are posed fashion images featuring women modeling clothing made from DuPont synthetic fibers. There are images that feature children’s and men’s clothing as well.

There are fashion types that overlap and appear within different categories. For example, dresses appear in Dress wear but also in other subseries.

Children and teens subseries consists of clothing mainly for school age girls and teen girls. There are some fashions for school age boys, teen boys, and infants. The clothing includes dresses, skirts, blouses, outerwear, pajamas, sportwear, and swimwear. Children’s wear can be seen periodically in other fashion categories. The majority of boys wear fashions appear in the Men’s wear subseries. Children and teens fashions date from 1955 to 1972 and 1976 to 1979. There is no information to account for the gap in years.

Dress wear encompasses both formal and casual wear. Styles include summer dresses, cocktail dresses, evening gowns, party dresses, everyday dresses, leisurewear, limited bridal fashions, and dresses intended for college students. There are several images featuring fashions created for actress June Allyson (1917-2006), host of The DuPont Show with June Allyson, which was an anthology drama series that aired on CBS from 1959 to 1961. There are also images of fashions created for the Queen of the New York Summer Festival, and these often feature couture designers. The materials in Dress wear date from 1955 to 1976.

Home sewing/fashion fabrics subseries shows McCall patterns made using DuPont textiles, mostly Qiana, but also Dacron, Orlon, and Antron. The clothing comprises fall fashions; holiday, vacation, and travel clothing; Party clothes and dresses; and limited swimwear and men's wear. There are some images from various fashion shows and a set of images of fashions designed for Second Lady Judy Agnew. The materials date from 1968 to 1980.

Hosiery includes pantyhose, stockings, tights, and men's socks. Women's hosiery is primarily made of Nylon (also Sparkling Nylon and Cantrece Nylon), and men's socks are made of Dacron, Lycra, and Orlon. This subseries contains a number of market research reports, speeches, and booklets, in addition to the publicity photographs and press releases. In 1964, the DuPont Company celebrated the twenty-fifth anniversary of Nylon. There are many press releases and publicity photographs that highlight the history of Nylon. These historical anniversary photographs appear in the 1964 files but contain photographs and textual documentation from various years. Those earlier dates have been supplied in the inventory, but the materials still appear in the file for 1964. The subseries contains materials that date from 1939 to 1970, but the files are from 1953 to 1970.

Intimate Apparel includes women's undergarments, loungewear, and sleepwear. Women's undergarments or underfashions are comprised of bras, panties, and slips, and shapewear. Shapewear may also be referred to as foundation garments, body garments, form persuaders or control garments. Images of undergarments are generally renderings or modeled under clothing, often in comparison shots showing how the clothing appears with versus without the shapewear underneath. The market research material contained in this subseries pertains to shapewear. Loungewear, or leisurewear, is defined as casual, comfortable clothing generally intended to be worn at home. This is in contrast to Sportswear, which is meant for outdoor use. Some loungewear, however, is promoted as being suitable to be worn in limited outdoor contexts. The photographs often show the model wearing the clothing outdoors, but usually still near the home in places such as the patio or garden. Sleepwear includes nightgowns, two-piece pajamas, and robes. There are also fashions of sleepwear for college students and sleepwear for mom as a gift for Mother’s day. The materials in this subseries date from 1955 to 1979.

Italian couture is primarily women's knit wear and features knit tops, dresses, pants, jumpers, coats, jackets, and hats. There are some images of swimwear, loungewear, and sleepwear. The Italian couture designers include: Antonelli, Avolio, Barocco, Bertoli, Brioni, Celli, Forquet, Galitzine, La Mendola, Litrico, Marucelli, Mirsa, Naka of Milan, Pucci, Romanita, Simonetta, Trico, Valentino, and Veneziani. Photographs are taken on location in Italy and date from 1960 to 1966 and from 1969 to 1971. There is no information provided to account for the gap in years.

Knit wear fashions consist of sweaters, dresses, and cardigans. Knits feature ski wear and travel or vacation clothing, as well as fashions for college students. There are also knits for children and men. Knit wear also caters to knitters, craft yarn consumers, and latch hook rug makers. DuPont Company hosted several knit workshops for vendors and designers related to Afghans, craft yarns, and knitting. Materials date from 1955 to 1979. There are a few advertisements from 1985 and 1987.

Men's wear features men, boys and teens fashions. Clothing includes tailored clothing such as suits, blazers, jackets, and sportcoats; casual clothing such as sportswear, sports shirts, and knits; outerwear and raincoats; and some sleepwear specifically for father’s day. Several years feature Western style clothing and mod styles. The materials date from 1959 to 1979, there are a few images from 1948, 1953, and circa 1950s.

Sportswear/activewear features primarily sportswear with less emphasis on activewear. Sportswear is similar to loungewear in that it is casual and comfortable. However, the main difference is that sportswear is intended for outdoor use. While sportswear is generally meant to enable movement, it is not the same as activewear. Activewear is clothing specifically intended to be worn for performing physical activities. Sportswear includes blouses, skirts, pants, suits, and outerwear. Many of these fashions would be appropriate for professional work settings or more formal occasions than what would generally be associated with sportswear. Likewise, many of the outerwear fashions would be appropriate for more formal occasions. Activewear includes fashions for skiing, tennis, golf, and sailing. Images from the late 1970s also include some fashions for roller disco. These images date from 1955 to 1979.

Swimwear includes swimsuits, coverups, and beach or poolside clothing. Some swimwear are designed by couture designers. Photographs are often taken on location at a special destination. The materials date from 1960 to 1975.

Touring kits are promotional materials from fashion shows. The materials generally include press releases, a program about the clothing designs, publicity photographs, retail price lists, speeches, and a folder to hold all of these materials. Not all of the touring kits are complete. The kits date from 1958 to 1978.

Uniforms subseries is a small set of images and press releases of women’s uniforms such as wait staff servers uniforms, nurses uniforms, beauticians, and world’s fair guides uniforms. The materials date from 1957, 1961, 1963, 1964, 1977, and 1979.

Textile reference files contain press releases organized by fiber and then chronologically. Many press releases contain a fabric swatch. There is some duplication with the press releases in the Fashion series. The subseries are: Acetate, Dacron, Lycra, Multi-Fibers, Nylon, Orlon, Rayon, Reemay and Zepel. Press releases date from 1946 to 1969.

Negatives, slides, and films are housed in cold storage and must reacclimate prior to viewing (Boxes 56-63 and Film Cans 1-8). Please contact the Audiovisual Collections and Digital Initiatives Department at least 48 hours in advance of research visit.