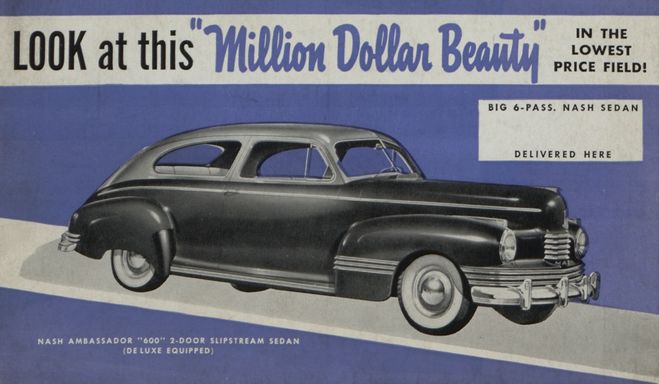 For over sixty years, Zachary Taylor Vinson (1933-2009) amassed a large and comprehensive collection of printed material documenting on the history transportation, particularly automobiles.

Born and raised in West Virginia, Vinson was a 1955 graduate of Princeton University. He served in the U.S. Army in Germany, then moved to New York City to work in advertising until he graduated from the University of Virginia Law School in 1961. Vinson practiced law with O’Melveney & Meyers in Los Angeles, California and the International Finance Corporation in Washington, D.C. until 1967 when he began working as a senior lawyer with the National Highway Traffic Safety Administration, a position he held until his retirement in 2003. Vinson played a significant role in the drafting of federal safety regulations governing tires and those requiring high-mounted brake lights in the rear window of automobiles, which began with the 1986 model year.

At the age of four, Vinson was introduced to automobile literature when he was given a 1938 Ford trade catalog. Vinson began attending automobile shows to actively collect by the time he turned seven. He would ask that his parents drive him to Huntington’s “Automobile Row,” where Vinson would collect literature from the dealerships located there. By the age of fourteen, Vinson was writing to the British, French, Italian, and Czech embassies in Washington, D.C. to request the addresses of automakers in those countries from whom he could obtain literature.

As he grew older, Vinson collected trade literature from additional sources, including, but not limited to, automobile manufacturers, fellow collectors, memorabilia dealers, auto shows, and auctions. He eventually amassed so much material that he built an addition to his Virginia home to store it all, which he referred to as his “Autotorium.”

In addition to collecting, Vinson was an active member of automobile organizations. He was president of the Society of Automotive Historians from 1993 to 1995 and served as the editor of Automotive History Review from 1995 to 2009. Z. Taylor Vinson passed away at the age of 76 on October 25, 2009.

Vinson’s manuscript A Collector’s Life: An Autobiography, included in Series XIII, is closed to researchers until 2035.

The collection is housed in off-site storage. Please allow 24 hours notice to view the materials. Advance notice is not required for books and periodicals.

Books, periodicals, and selected trade catalogs are located in the Published Collections Department. Item level inventories are included in Series XIV of this finding aid and can be found in Hagley's online library catalog.

Artifacts were transferred to the museum division. An item level inventory is included in Series XXV of this finding aid.

The collection was processed with support from the Council on Library and Information Resources (CLIR) Cataloging Hidden Special Collections and Archives grant.

Part of the Published Collections Repository