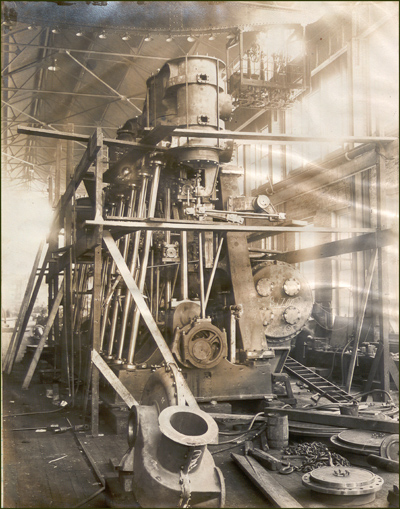 The Bethlehem Steel Corporation was the number two steel producer in the United States between 1916 and 1984. For a time it was also the largest shipbuilding firm in the world. The records of the Bethlehem Steel Corporation (parent company) are a series of fragments, lacking the complete runs of corporate and executive documents that normally comprise a business archive, and largely consist of fragmentary corporate records and files from executive officers.

The Bethlehem Steel Corporation was the number two steel producer in the United States between 1916 and 1984. For a time it was also the largest shipbuilding firm in the world.

The Bethlehem Steel Corporation was incorporated in New Jersey on December 10, 1904, to effect the reorganization of the United States Shipbuilding Company of 1902. Bethlehem was a holding company whose purpose was to control the older Bethlehem Steel Company and a series of shipyards in Elizabeth, N.J., Wilmington, Del., and San Francisco, California.

The company was controlled by Charles M. Schwab until his death in 1939. In addition to steel ships, Bethlehem was a major producer of armor plate and ordnance and soon ranked on a par with Krupp, Armstrong's and the other big European munitions makers. It also pioneered in structural steel, manufacturing the rolled wide-flange columns and beams invented by Henry Grey.

Bethlehem grew rapidly by absorbing competitors. Its principal acquisitions were the Fore River Shipbuilding Company (1913), the Pennsylvania and Maryland Steel Companies (1916), the Lackawanna Steel Company (1922), and the Midvale Steel & Ordnance Company (1923). A second round of acquisitions, including the Pacific Coast Steel Company (1930), the McClintic-Marshall Corporation (1931) and the Kalman Steel Company (1931), expanded Bethlehem's reach into other areas of the country and strengthened its position in structural steel fabrication and as a supplier to the new manufacturers of consumer goods.

Like all domestic steel makers, Bethlehem was increasingly vulnerable to competition from non-union minimills and foreign producers, particularly after 1973. A drastic downsizing program between 1977 and 1990 temporarily eliminated massive annual losses. In the process, the company lost its number-two ranking, its fabrication and special product divisions, and its self-sufficiency in raw materials. Iron and steel production at the original Bethlehem site ceased in 1995, followed by the rolling mill in 1997 and the coke works in 1998. Bethlehem acquired the properties of Lukens Inc., a specialty plate manufacturer on May 29, 1998. With the end of the boom of the 1990s, Bethlehem filed for bankruptcy on October 15, 2002. The company was dissolved and its remaining assets were sold to International Steel Group Inc. on May 7, 2003. In 2005, International Steel Group was acquired by Mittal Steel, which merged with Arcelor in 2006 to become ArcelorMittal.

The records of the Bethlehem Steel Corporation are a series of fragments, lacking the complete runs of corporate and executive documents that normally comprise a business archive. The surviving records give a reasonable overview of the company's history and activities, but one which is lacking in depth.

Correspondence and memorabilia of its executive officers consist largely of material collected by Robert McMath, Vice President (Finance) and Secretary. These include organization papers, directories, annual and quarterly reports to the stockholders and internal statistical reports. McMath’s correspondence deals with an assortment of subjects, including those related to the financial downturn of the 1930s and its effect on business and industry. Other letters pertain to plant visits, construction activities, destruction of securities, financial progress of competing steel companies, investments, the benefits of free enterprise over communism, and Bethlehem’s contribution to World War II. Although the bulk of the letters are addressed to McMath, some are directed to Bethlehem Steel Chairman Eugene G. Grace and Charles Schwab.

There are bound collections of documents regarding major mergers and acquisitions and the issuance of stock and bond issues, these documents are most useful in tracing the evolution of corporate structure. Also from McMath's office are scattered legal files of which the most important is a transcript of testimony from the anti-trust proceedings barring the merger with the Youngstown Sheet & Tube Company in 1968.