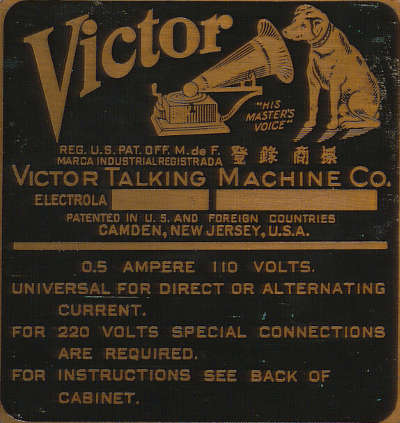 For over fifty years the Radio Corporation of America (RCA) was one of the country's leading manufacturers and vendors of radios, phonographs, televisions, and a wide array of consumer and military electronics products. This collection contains the records from the Secretary's Office of the Victor Talking Machine Company and its successors RCA Victor Company, Inc., and Radio Corporation of America's RCA Victor Division. They consist of minutes of the Executive and Management Committees, an internal annual report and two contract files for supplying sound equipment to movie studios.

For over fifty years the Radio Corporation of America (RCA) was one of the country's leading manufacturers and vendors of radios, phonographs, televisions, and a wide array of consumer and military electronics products. The company can trace its beginnings back to the Victor Talking Machine Company which was incorporated in New Jersey of October 3, 1901, by Eldridge Reeves Johnson (1867-1945). Johnson was a machinist who had been a subcontractor for Emile Berliner's (1851-1929) Berliner Gramophone Company.

It quickly became both the leading U.S. manufacturer of phonographs, the famous "Victrola" introduced in 1906, and the recorder and manufacturer of phonograph records by many of the leading musical artists of the day. However, during the 1920s, radio eclipsed the phonograph as a means of bringing popular entertainment into the home, and on March 15, 1929, the Radio Corporation of America bought control of the Victor Talking Machine Company. The Victor plants in Camden, New Jersey, and Oakland, California, were reorganized as the RCA Victor Company, Inc. at the end of 1929.

The company became the RCA Victor Divison of the RCA Manufacturing Company, Inc., in 1934 and of the Radio Corporation of America in 1942. Activities at the Camden Plant, later successively operated by the General Electric Company (which bought RCA in 1986) and the Martin Marietta Corporation, ended in 1993.

The records consist of sixteen volumes from the Secretary's office in the Camden administration building. They were contained in a safe which was acquired as scrap by Harold S. Riess in the early 1990s and were given to Hagley by his daughter in 2016 and 2019.

The first twelve volumes consist of the minutes of the Executive Committee (1912-1920, 1927-1929) and the minutes of the Managing/Managers/Management Committee (1924-1931). They give a top level view of operations at the Camden facility down to RCA Victor's reorganization and abolition of the Management Committee on February 18, 1931. They cover the entire gamut of activities, including financial statements, levels of output, plant construction, approvals of Victrola designs and prices, production levels, purchases of materials, real estate, patents and patent suits, trademarks and advertising. Of particular note are the approvals of recording contracts with various artists, many still famous, including the length of the contract and payments.

A report of the President to the Board of Directors from October 1932 covers the company's responses to the worst years of the Depression.

The next two volumes contain production contracts from 1945 to 1946 for providing sound equipment to two motion picture studios, Republic Productions, Inc., and Warner Bros. Pictures, Inc. In addition to the basic contract terms, they contain capsule histories of companies in the Victor-RCA family and of their experience in the development of sound recording.

Lastly, a small volume contains historical corporate data on RCA's subsidiary companies up to about 1940. Included are incorporation dates, capitol stock issued, names of shareholders and officers, and other basic corporate data. Additionally, there is a short chronological history of the formation of the Victor Talking Machine Company through the merger of the RCA Manufacturing Company, Inc. into RCA.