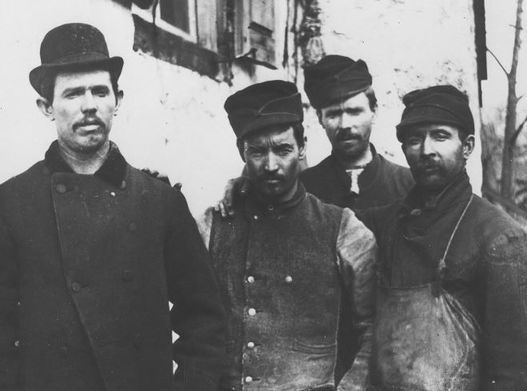 Pierre A. Gentieu (1842-1930) was a long-time employee of E.I. du Pont de Nemours & Company. Gentieu was born in France in 1842. He emigrated to the United States around 1859. He began working for DuPont in 1877. This collection is comprised of images taken by DuPont Company employee Pierre Gentieu from approximately 1880 to 1920. Gentieu's images document the DuPont Company Powder Yards along the banks of the Brandywine River in Wilmington Delaware. The collection documents the surrounding community along the Brandywine including worker's families, du Pont family homes, churches in the area, DuPont Company exposition displays, and other facets of social and work life in the area.

Pierre A. Gentieu (1842-1930) was a photographer and a long-term employee of E.I. du Pont de Nemours & Company. Gentieu was born in France in 1842. He immigrated to the United States in 1860. As a member of the local militia in New Orleans, Gentieu refused to swear allegiance to the Confederacy. In July of 1862 he enlisted with the 13th Regiment of Volunteers of Connecticut, which was formed in Louisiana.

He began working for DuPont in 1877 and remained a loyal employee until his retirement in 1911. In 1879, while on a lunch break Gentieu painted the Lower Yard. The painting impressed his direct supervisor, Lammot du Pont (1831-1884) who requested that Gentieu photograph it so that various members of the du Pont family could have a copy. Shortly after Gentieu was promoted to making sieves for separating powder grains. In 1881, he was promoted to yard clerk, and then later store keeper at the mills.

Drawing and photography were among Gentieu’s favorite pastimes. The du Pont’s allowed Gentieu to photograph the DuPont Co. plant, property, family members, and their homes. He created an invaluable photographic record of the company's Brandywine Mills at the turn of the century.

This collection of Gentieu's photographs constitutes the most important surviving visual record of the DuPont Company's Hagley Yards during the late nineteenth and twentieth centuries, when the manufacture of black powder peaked and began to decline with the development of high explosives. Subjects represented include the DuPont Powder Yards on Brandywine Creek and other company buildings on that site, du Pont Family homes (including Windmar, Rokeby, Pelleport, Swamp Hall, and Eleutherian Mills, which was converted to a workers' club during Gentieu's years of employment), DuPont Company workers and their homes and families, Delaware School Districts twenty-three and seventy-five, Wilmington-area churches (including Mt. Salem and St. Joseph's), and probably the only extant images of the aftermath of late nineteenth century black powder explosions on the Brandywine. Gentieu was also apparently involved in arranging the company's trade displays of shooting powders at the annual Sportmen's Expositions held at Madison Square Garden in New York.

Original glass negatives are the property of the Historical Society of Delaware.

Reproduction possible from copy negatives. Permission for publication must be obtained through the Historical Society of Delaware.