Locomotives and views of Mauch Chunk contact photographs and negatives 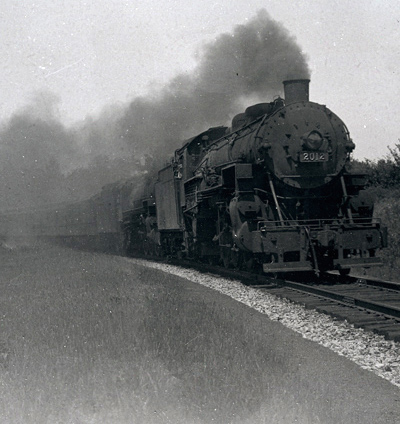 This collection consists of glass plate negatives and photographic copy prints which were made directly from the negatives. The images document an array of subjects, though the majority of the images are of locomotives, railroad cars, railroad stations, and other railroad infrastructure. Various landscape and cityscape photographs are also included. Where it is possible to identify the locations, the majority of images document sites in Pennsylvania, though photographs of sites in New York state and Ontario are also present.

William H. Rau was prominent Philadelphia photographer. During the 1870s and 1880s, Rau would become best known for his work photographing scenic views from around the world. During his stays in Philadelphia, he was also prominent portrait photographer for the city’s elites. James Zellner was a lesser-known figure, who worked as a regional photographer out of the town of Mauch Chunk, Pennsylvania, where he was credited as being the first operator of a photograph gallery in the town.

Both Rau and Zellner's contributions to this collection include images of Mauch Chunk, Pennsylvania. Mauch Chunk is the original name of Jim Thorpe borough in Carbon County, Pennsylvania. The discovery of coal prompted several mining towns to develop in Mauch Chunk and lead to it becoming an important coal shipping center. In 1827, a downhill railroad track was constructed by the Lehigh Coal & Navigation Company to transport coal from the mines to the wharves. The railroad track became known as the Mauch Chunk Gravity Railroad because it was gravity powered as the cars descended 900 feet for 8.7 miles.

None of the negatives are captioned, but some have been identified. The majority of the identifiable locations in these photographs are places in Pennsylvania, though a small number of photographs from New York state and Ontario, Canada are also present. Many locations are not identified. Several of these pictures have been identified from other sources as having been taken by photographers William Rau or James Zellner, but may not be the original negatives, as many negatives appear to be copies of originals. Most images do not have a known photographer.

Railroad tracks and bridges includes photographs of railroad infrastructure such as railroad yards, tracks, tunnels, and bridges. Most of the images in this series are undated and unidentified.

James Zellner photographs series document scenes in and around his hometown of Mauch Chunk, Pennsylvania.

Various locations series includes a variety of cityscapes and landscapes, most of which are undated and unidentified. The few identifiable locations include a photograph of Niagara Falls, an image of Chestnut Hill Baptist Church in Philadelphia, and two images of the S.S. Robert W.E. Bunsen in Welland Canal in Ontario Canada. Some images in this series may be attributable to William H. Rau or James Zellner, but cannot be verified as such at this time.

Glass plate negatives DO NOT CIRCULATE.