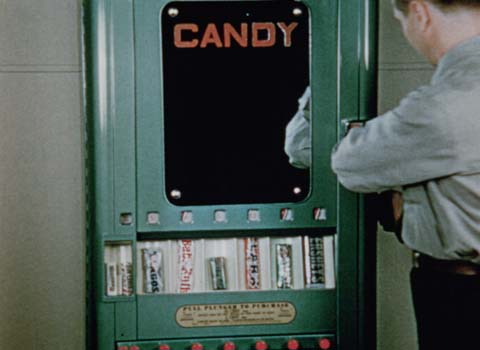 ‘Sponsored film’ defines variety of motion picture productions funded by businesses, organizations, or governments that dictated the point of view, audience, and intent of the film. Industrial or business films are a subgenre of sponsored films with content that marketed products and ideas, touted a particular company or industry, trained employees, and explained manufacturing or transactional processes around the creation and sales of products and ideas. The Sponsored and industrial Motion Picture Film Collection at Hagley is an artificial collection compiled by curators that includes single motion picture films or small sets of films acquired via purchase or donation.

‘Sponsored film’ defines variety of motion picture productions funded by businesses, organizations, or governments that dictated the point of view, audience, and intent of the film. Productions that fall under the scope of sponsored films include those defined as industrial or business films, advertising films, educational films, religious films, medical and scientific films, government films, and advocacy films by social service organizations and/or trade organizations.

Industrial or business films are a subgenre of sponsored films with content that marketed products and ideas, touted a particular company or industry, trained employees, and explained manufacturing or transactional processes around the creation and sales of products and ideas.

While there are examples of ‘sponsored films’ as early as 1900 the highpoint of sponsored films was the 1950s. In 1958, an estimated 600 production houses in the US specialized in producing sponsored films with an estimated output of 5,000 titles per year. In The Field Guide to Sponsored Films author and film archivist Rick Prelinger estimates that 300,000 industrial and institutional films were made in the United States prior to the 1980s. While it is impossible to know an exact number, Prelinger states that the number of sponsored films “far more than any other type of motion picture.”

Beginning around 1900, industrial and sponsored films could be seen in commercial theaters along with entertainment films. As the Hollywood system evolved, studios increasingly dictated the content shown in theaters and, by the late 1930s, there influence barred most sponsored films from commercial movies houses. The practice of showing sponsored films outside of theaters become the primary means of distribution in the 1940s when 16mm sound film became the medium of choice for production houses that specialized in sponsored films. The genre has sometimes been referred to as “non-theatrical film” as it became one of its primary characteristics. Along with reduced production cost, the availability of compact and affordable 16mm projectors opened channels for distribution and display. Classrooms, trade shows, professional and fraternal organizations, clubs, fairs, businesses, and town halls all became forums for showing films.

Among the leaders in the sponsored film production business were Jam Handy headquartered in Detroit and the Calvin Company in Kansas City. New York and Chicago had a number of firms that specialized in films for business. Producers worked directly with clients or through an advertising agency. Most large and medium sized metro areas had at least one production house that made sponsored films for businesses and organizations in the middle decades of the 20th century.

The advent of television increased business for sponsored film producers as many began producing content for the new medium. By the 1970s, emerging video technology and an economic downturn impacted the industry and many production companies closed shop during the decade. In 1973 Business Screen Magazine, the trade journal for sponsored film industry, ceased publication. Production houses that did survive did so by adopting video and expanding their business to offer multi-media services for business clients and trade shows.

The collection is comprised of sponsored films produced for businesses (industrial films) and those produced for organizations promoting business interests. Additionally, it contains educational films with the intent to teach consumerism, energy production, career training, and similar topics with a pro-business message.

The collection has a small number of commercials produced for television as well episodes of DuPont sponsored television shows Cavalcade of America and DuPont Theater.

The collection is arranged alphabetically by the film’s sponsor.

Collection is open for research.

Film material is housed in cold storage and must reacclimate prior to viewing. Please contact the Audiovisual Collections and Digital Initiatives Department at least 48 hours in advance of research visit.