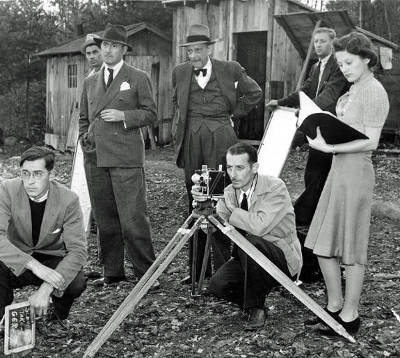 Cinecraft Productions was founded in 1939 by Ray Culley (1904-1983) and Betty Culley (1914-2016) in Cleveland, Ohio. Ray Culley served as president of the company until his retirement in 1970. During his tenure, Cinecraft specialized in commercial productions for business, industry, trade organizations, and, in some cases, government agencies and social service organizations. Cinecraft was one among hundreds of production houses in the U.S. during the middle decades of the 20th century that specialized in motion pictures commonly referred to as non-theatrical, industrial, business and/or sponsored films. This collection documents the history of the company, the people that worked there, and some of the company's film and educational projects. The collection has been arranged into three series: Company and personnel history; Films; and Educational materials. The materials date from 1937 to 2016 with a bulk of the collection dating from 1937 to 1975.

Cinecraft Productions was founded in 1939 by Ray Culley (1904-1983) and Betty Culley (1914-2016) in Cleveland, Ohio. Ray Culley served as president of the company until his retirement in 1970. During his tenure, Cinecraft specialized in commercial productions for business, industry, trade organizations, and, in some cases, government agencies and social service organizations. Cinecraft was one among hundreds of production houses in the U.S. during the middle decades of the 20th century that specialized in a motion pictures commonly referred to as non-theatrical, industrial, commercial, business and/or sponsored films. While ownership has changed twice since its founding, Cinecraft is still in business and rightfully claims itself the “country's longest standing corporate film & video production house.”

Cinecraft’s founder, Ray Culley, was born in 1904 in Norwalk, Ohio. He apprenticed and worked as a watchmaker and jeweler for twelve years before moving to Hollywood in 1930 with the intent of working in the movies. He started his Hollywood career as an actor with bit parts in a number of films before moving behind the camera as a production manager and assistant director mainly for Allied Pictures, Liberty Pictures, and Republic Films. In 2018, the Internet Movie Database (IMDb) lists Culley as part of the production team on twenty-three films in the genres of westerns, dramas, and comedies.

Culley’s transition to industrial/sponsored filmmaking came in 1937 when he was hired as assistant director on a General Electric film titled From Now On produced by Tri-State Productions in Cleveland. The movie was written and produced like a Hollywood film except it was entirely funded by GE and featured numerous GE products. This work influenced him to move back to Ohio where he was hired as the director on another commercial film The World’s Largest Electrical Workshop for the General Electric Lighting Division in Cleveland.

Betty (Buehner) Culley was born in 1914 in Germany and immigrated to the United States in 1923. Her family ended up in Cleveland where her father worked on the construction of the Terminal Tower. When she met her future husband, she was employed as a film editor with Tri-State Productions in Cleveland. She later worked as an editor for a film lab in New York where she gained experience working with 16mm sound film, a relatively new format at the time.

Ray and Betty married in May 1939 and started Cinecraft that same year. Betty Culley recognized the economy and potential of 16mm film and influenced her husband to employ the format in their new business of making commercial films. Since 16mm was a cheaper format then 35mm, films became affordable for more businesses to employ in marketing and advertising opening up a larger customer base. Betty Culley was also instrumental in developing the multi-camera film shooting methods that became an important element of Cinecraft’s success. That innovation brought down production costs as well.

Cinecraft started its production studio in a rental space in the Card Building in Downtown Cleveland. Their first film was a thirty-minute educational safety film titled You Bet Your Life for the Cleveland Railway Company under contract with Fuller & Smith & Ross, a prominent Cleveland-based advertising agency. The early years of Cinecraft brought work from many local businesses and national businesses with satellite offices and/or operations in Ohio. Fuller & Smith & Ross played an important part in Cinecraft’s early years. Cinecraft produced films for Westinghouse from their start. Westinghouse was among the ad agencies most prominent clients at the time. During the Second World War, Cinecraft made films for the government -- they received a check for $34,486 in 1944 from the U.S. Treasury related to work they did for the Navy. Starting in 1948, Cinecraft began producing television advertisements directly for clients and through ad agencies including Fuller & Smith & Ross, McCann Erickson, and Lang, Fisher & Stashowe.

After less than ten years of operation, Cinecraft moved its operation to the Cleveland Chamber of Industries Building at 2515 Franklin Ave in Cleveland. The $45,000 purchase price paid in 1947 provides insight into the company’s early success. They renovated the building’s atrium into a soundstage. The space allowed them to design and build custom sets for a variety of productions. In the 1940s, they added an animation department that included five full-time artists. According to a notation in the Cinecraft log books, between 1939 and 1959 Cinecraft produced 299 films and 900 TV/Radio commercials.

Many of their accounts -- Westinghouse, General Electric, Ohio Bell Telephone, Republic Steel, and Standard Oil of Ohio being prime examples -- lasted for decades. Production of films for the steel, energy, and tire industries endured well into the twentieth century.

Starting in the 1940s, Cinecraft developed and employed a 3-camera production technique that would later become standard for shooting television shows. In 1950, Cinecraft produced a film for the Domestic Sewing Machine Company under contract for Fuller & Smith & Ross. The President of Domestic Sewing Machine Co, Dodge E. Barnum (1902-1981), wrote an article for Advertiser’s Ink in September 1950 titled “Three-camera technique used to shoot TV film.” In the article, Barnum described how the method saved time and money by eliminating re-shoots from multiple angles and lighting changes which were necessary with single camera shoots.

The three-camera film technique improved the quality of television programming re-broadcasts by eliminating the need for low quality versions that used a kinescope - a film camera that would produce a copy of a broadcast from a video monitor. In 1953, Cinecraft demonstrated the three-camera technique in a film they described as “experimental” titled Sadie Ferguson - Postmistress. The last five minutes of the film went into detail about the advantages of the production method.

Cinecraft produced a television series called The Ohio Story, an educational program that started on radio in 1947 before transitioning to TV in 1951. In all, 1,309 radio shows and 175 TV films were made in the series. The Ohio Story sponsored by Ohio Bell Telephone -- ran on local Ohio television until 1962.

In addition to producing industrial films and television commercials, Cinecraft made slide films for clients and audio only programs for radio. In some cases, they managed the sales of film prints for clients and, on a small scale, sold stock footage which provided another revenue stream.

In 1970, Ray Culley sold the business to his younger brother Paul Culley (1924-2016) and his wife Christine (Hofstetter) Culley (1921-2016), who ran the business until 1985 when they sold it to its current owners Neil McCormick and Maria Keckan. McCormick and Keckan were Cinecraft employees at the time of the sale.

Cinecraft began to transition from film to video in the 1970s. They produced their final work on film in the early 1980s. Starting in the 1990s they began to transition to the digital technology that is now ubiquitous in all motion picture production. They are one of the few independent industrial/commercial production houses that successfully transitioned through these three significant technological changes.

Cinecraft continues to operate out of the same facility purchased by Ray Culley in 1947. In recent years, Cinecraft has evolved into a nationally recognized producer of custom content for corporate learning and development clients.

A special thanks to Jim Culley for his research and contribution to this historical note.

Company and personnel history series includes correspondence, account ledgers, Ray Culley’s phonebook, biographies of select personnel, staff photographs, newspaper and magazine articles, and awards. The two account ledgers document the financial activities surrounding films made between 1945 and 1971. The account ledgers are copies. Of particular note is a memoir about Paul Culley, and two oral history interviews with key members of Cinecraft of which there is both a digital video and a written transcript. The materials date from 1939 to 2016.

The Films series contains reels for twenty-six films. The films are generally sponsored by a company or trade organization such as General Electric, the DuPont Company, Hercules Powder, Westinghouse, Armco Steel, National Association of Manufacturers, and the Cleveland Chamber of Commerce. There is associated documentation related to thirteen of the twenty-six films. The related documents include copies of articles about the film or showings of the film, brochures, advertisements, and published film descriptions. Six scripts or shooting scripts are included. In some cases there are photographs or transparencies. There is documentation related to thirty-two films in which the film reels are not a part of the collection, four of which have digital copies and there are two digital videos with no accompanying material. There are a few photographs of studios built by Ray Culley. There are production stills which include photographs of film appearances of Ray and Betty Culley, Ray and Betty's oldest two sons, Jim and Paul, as children, and their family home when it was used as a shooting location. The films are arranged chronologically by the date of the film creation, which is not necessarily the date of the associated documentation. Most of the articles and advertisements are copies. The materials date from 1937 to 1975.

Educational materials series contains booklets, audio, and filmstrips for classes on electronics, reading, and writing. There are also two sets of a children’s educational series called “The Lollipop Dragon,” which was geared at pre-school and elementary school age children, created by three Kent State students and produced by Cinecraft Productions. This series is arranged chronologically and the materials date from 1970 to 1972.