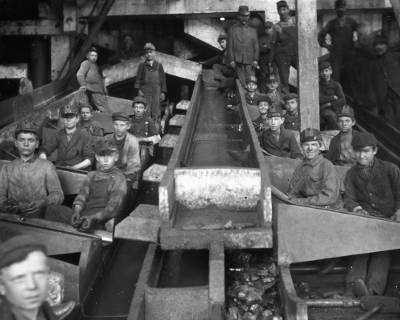 Based in Wilmington, Delaware, Frank Earle Schoonover (1877-1972) was a prolific commercial illustrator, artist, and avid photographer. Over the course of a six-decade career, he completed more than twenty-five hundred works, primarily illustrations for magazines and books but also landscapes, portraits, murals, book plates, sculpture, and stained-glass windows. This collection consists of negatives taken by Schoonover, largely for use as source material for his artwork. There are also images of his artwork, restoration projects, and him, his family, and friends.

Based in Wilmington, Delaware, Frank Earle Schoonover (1877-1972) was a prolific commercial illustrator and artist. Born in Oxford, New Jersey, as a child Schoonover spent summers exploring the outdoors near his grandparents' residence in Bushkill, Pennsylvania. In 1896, he enrolled in art school at the Drexel Institute of Art, Science and Industry in Philadelphia with the goal of studying under Howard Pyle (1853-1911), a prominent illustrator whom Schoonover admired and who at the time was offering classes at Drexel. After three semesters, Schoonover advanced to Pyle's class and in 1898 won a scholarship to Drexel's Summer School of Illustration, an eight week course offered by Pyle near Pyle's summer home in Chadds Ford, Pennsylvania.

Under Pyle's mentorship, Schoonover was commissioned in 1899 to illustrate A Jersey Boy in the Revolution by Everett T. Tomlinson (1859-1931). These became the first published images of Schoonover's career as an illustrator. The images are also the first Schoonover recorded in a series of diaries, which he called daybooks, the artist maintained throughout his career and in which he assigned numbers to and wrote details on virtually every illustration he completed.

In 1900, Schoonover followed Pyle to new studio spaces at 1305 North Franklin Street in Wilmington after Pyle had decided to resign from Drexel and open an art school himself. After Pyle closed the space in 1905, Schoonover, along with other young artists Pyle had mentored, established permanent studios at 1616 North Rodney Street. Although the school was closed, Pyle continued to offer critiques and guidance to selected former students, Schoonover included. It was also under Pyle's encouragement that Schoonover began traveling to places he intended to illustrate to research and sketch.

Schoonover's trips to the Hudson Bay area of Canada in the winter of 1903-1904 and the summer of 1911 proved particularly influential. While there, Schoonover spent time at the Indian settlements of fur trappers and supply posts of the Hudson Bay Company, where he sketched and photographed the surroundings and indigenous groups. He returned to the sketches and photographs he took on these trips as source material for illustrations many times over the course of his career. In addition to utilizing travel observations, Schoonover relied on the use of human models for his illustrations throughout his career. Schoonover also purchased a seasonal home at Bushkill in 1914 where he had spent summers as a child and at which he maintained a summer studio, and the property features prominently in Schoonover's photography and art.

Schoonover's career accelerated during the first decade of the twentieth century. During this period, he completed illustrations for twenty-five books, three covers, and nearly one hundred articles in major magazines. In addition to illustrating fiction stories, Schoonover illustrated several muckraking articles, for which he traveled and photographed source subjects. Subjects included, among others, children's working conditions in anthracite coal mines in Pennsylvania, poor youth in New York City, Italian immigrants traveling in steerage, and the working conditions of female workers in Pennsylvania silk mills. The decade from 1911 to 1920 proved even more prolific, during which time the artist illustrated nineteen books and completed more than 600 illustrations for top American magazines.

In addition to his own art, Schoonover began teaching in the early 1920s, first through the Phoenix Art Institute and in 1928 for the newly established Wilmington Academy of Art. He opened his own school of art in Wilmington in 1941, where he offered classes for adults during the week and classes for children on Saturday mornings. He was also extremely active in the Wilmington arts community. Schoonover passed away in 1972 at the age of ninety-five.

Intellectual ordering reflects the order as originally presented in the Frank E. Schoonover Manuscript Collection of the Delaware Art Museum. Physical arrangement of the collection is by negative size and type.

The Artwork, non-published, series consists of negatives of Schoonover's easel paintings, murals, sculpture, and stained glass. Easel painting images make up the bulk of this series and include landscapes, portraits, and subject paintings. Where possible, the paintings are identified with the corresponding number Schoonover assigned in his daybooks.

The Photofile series, as maintained by Schoonover, consists of negatives primarily taken on research trips for Schoonover's artwork and illustrations. These images are identified by place or by subject. The series includes images of Bushkill, Pennsylvania, and various natural scenery from other Pennsylvania locations, some taken on camping trips. Delaware locations are also represented such as Old Drawyer Church in Middletown, Old College in Newark, Rehoboth, Schoonover's Franklin St. studio, the Delaware River, and houses in Milford. Also included are negatives taken during research for muckraking articles for which Schoonover contributed illustration. Such images include anthracite coal mills near Scranton, Pennsylvania in 1903 taken for the article, "Children of the Coal Shadows," by Francis H. Nichols; a 1903 trip to New York City for the article, "The Waifs of the Street," by Ernest C. Poole; a 1906 trip to the western United States for an article on the Juvenile Court system written by Lincoln Steffens; and Italian immigrants traveling in steerage on the ship, Konigin Luise, in 1908 or 1909. There are also images taken on Frank and Martha Schoonover's honeymoon in Louisiana and Cuba and Irénée du Pont's residence, Xanadu, in Cuba taken circa 1931. Images identified by subject include schooners, yachts, river boats, ships, shad fishing, various trees, horses, autumn scenes, corn shucks, swamps and marshes, splatter docks, buildings and houses, cattle, costumes, flower gardens, ice on ponds, Indianapolis/Mississippi steamers, horse-drawn vehicles, and fishing at Maskenozha and Mast Hope. Others include "Gypsies;" logging camps; American Indians; a train wreck; lineman on pole; Ephrata Cloisters; Jamaica; and Barataria, Louisiana.

The Personal and biographical series depict Schoonover, his family, friends, and students. His two children, Cortlandt and Elizabeth feature prominently. There are many images taken at Schoonover's Bushkill, Pennsylvania property and his Wilmington studio. There are also images of his mentor, Howard Pyle, as well as other Pyle students and images of exhibitions of Schoonover's work.

The Models series consists of images Schoonover photographed of male, female, child, and animal models he used as the basis for many of his illustrations. Many of these are identified by the title of the illustration for which the subject was posing. A few of the individuals are identified by name and include Marie Stewart, Betty L. Hall, Rev. Don Large, Rev. D. Parsons, John Porter, Charles Staats, and Sgt. James P. Conner. Others are identified by subject, which include firefighters, hunters, American Indians, Mounties, and pirates. Animals represented include, among others, cows, dogs, circus elephants, horses. Finally, there are a few images of inanimate objects including furniture, ships, guns and boots.

The Conservation/Restoration series consists of photographs of artwork by artists other than Schoonover that Schoonover repaired or restored as part of his studio business.

This collection has been largely digitized. The "Conservation and Restoration" series and portions of the "Illustration" and "Artwork, non-published" series were not digitized. View this collection in the Hagley Digital Archives.

Where possible, ordering and folder titles were maintained as they appeared in the original Delaware Art Museum finding aid for the Frank E. Schoonover Manuscript Collection. Exceptions to this include folders labeled "miscellaneous" or "unidentified", for which additional description was added. The title of the series "Subjects - slides" was changed from "Things - slides" to more thoroughly reflect the content matter of the series.