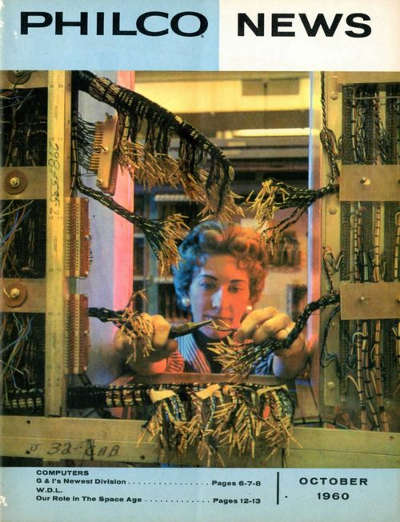 Advertising, both print and radio, developed as a prominent industry in the early decades of the twentieth century as popular magazine circulation exploded and the radio became ubiquitous in American households. This collection consists of digital access copies of publications, including employee magazines, and magazine advertisements for radios and other related household electronics dating from 1912 to 1980.

Advertising, both print and radio, developed as a prominent industry in the early decades of the twentieth century as popular magazine circulation exploded and the radio became ubiquitous in American households. Increased spending power in the 1920s saw advertising agencies promoting consumer spending on a whole array of technologies and appliances newly within reach of middle class households. Radio and related products benefited from the ever-growing circulation of popular magazines and soon radio broadcasting itself became an influential method of reaching American consumers.

Print advertising championing new technologies in radio and phonographs often emphasized the elegance and sophistication that such objects could bring to the middle-class home. The Victor Talking Machine Company, a primary manufacturer of phonographs and phonograph records, introduced its “Red Seal” label in 1903 and advertised high-quality recordings in magazines over the following decades by featuring famous opera and popular singers, musicians, conductors, and composers. These purveyors of culture were now available to be enjoyed by new audiences across the country. And to play such recordings, the company’s “Victrola” phonograph was introduced in 1906 and featured highly decorative casework. Such a phonograph, according to advertisements, would appear elegant in any home.

At first largely the realm of hobbyists, radio emerged as a new medium for mass entertainment and advertising in the 1920s. While early print advertising of radios emphasized the distant stations consumers could reach with their receiving sets, companies led by the Radio Corporation of America (established in 1919 and later renamed RCA Corporation) focused on expanding radio beyond its narrow consumer base. The company introduced its Radiola line of deluxe home radios in 1923 and a superheterodyne set followed in 1924. The superheterodyne allowed sound to be heard through a loudspeaker instead of earphones, allowing an entire household to listen to a broadcast. The Radiola and radios like it would largely replace the Victrola, and in 1925, Victor and RCA introduced a combination radio and phonograph in one cabinet. Along the way, print advertisements continued to be used to popularize these radios, and by 1934 some sixty percent of American households owned a radio.

The popularization of radio was helped along by innovative broadcasting. Westinghouse established a radio station, KDKA, in Pittsburgh in 1920 after one of the company’s engineers had begun broadcasting music. The station soon began featuring sports including prizefighting and baseball. The Detroit News and other newspapers established stations to spread news and information to radio listeners. RCA established the first radio network, National Broadcasting Company (NBC), in 1926 with 19 stations. Columbia Broadcasting System (CBS) and others soon followed to reach ever growing listener bases.

To sustain the new radio stations and networks, a new form of advertising was introduced, although print advertising continued to play an important role. Advertisers began purchasing air time from stations to broadcast commercial messages directly to radio listeners. Such direct advertising began in 1922, and by 1928 radio had become an advertising-supported medium.

The 1930s and the Great Depression saw consumer spending and spending on print advertising drop. By 1938, radio had surpassed magazines as a source of advertising revenue. Radio broadcasting benefited from being an inexpensive form of entertainment in difficult economic times. Nevertheless, magazines would remain an important medium through which to promote radio and related products in the following decades. World War II saw the government-run War Advertising Council promoting wartime efforts and an idyllic vision of American home life, a home life which included radio and other modern conveniences, through advertising. Advertisements of this era often promote the buying of war bonds and contain patriotic themes.

After World War II ended, advertising played a key role in promoting post-war consumer culture. With radio well established in American households, television followed. The introduction of high fidelity sound reproduction in audio recording in the 1940s led to the term “hi-fi” becoming a marketing buzzword in the 1950s. While popular magazine circulation would diminish in later decades, manufacturers of radios and successor consumer electronics continued to advertise in print-based media.

This collection is comprised of digital access copies. The collector retains the originals.

The Publications series, dating from 1920 to 1960, consists of industrial magazines, annual reports, trade catalogs, pamphlets, and coloring books representing fifteen radio and consumer electronic manufacturing companies. Of particular note are 141 issues dating from 1945 to 1962 of Philco News, which was the employee newsletter for the Philco Corporation. The series also includes two annual reports and other publications from the Philco Corporation. Also of note in this series are fifteen issues from 1930 and 1931 of Good News about RCA Radiotrons, published by Radio Corporation of America for its distributors and dealers.

More than 300 companies are represented in the series; approximately half of the companies have only one advertisement. The companies are primarily from the United States, although several international and multinational corporations are also represented. They include several pioneers in the radio, television, and consumer electronics industries. Other companies represented in the series include recording labels and radio or television stations. There are also advertisements from non-related industries which feature radio prominently in the image of the advertisement.

Originals are held in a private collection.

The Benson Ford Research Center in Dearborn, Michigan holds a number of Philco annual reports from the years 1940 to 1960.