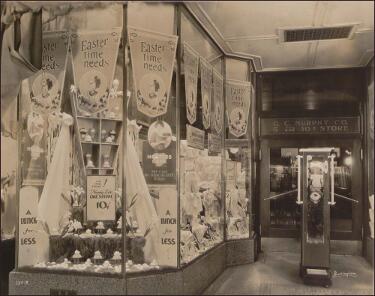 G.C. Murphy Co. was a chain of discount variety stores. George Clinton Murphy (1868-1909) founded the G.C. Murphy Co. in 1906 in McKeesport, Pennsylvania. it grew to more than 500 stores before its acquisition by Ames Department Stores Inc. in 1985. These photographs document window displays at a G.C. Murphy store in Washington, D.C. In 1906.

G.C. Murphy Co. was a chain of discount variety stores. George Clinton Murphy (1868-1909) founded the G.C. Murphy Co. in 1906 in McKeesport, Pennsylvania. Murphy had been an executive with McCrory stores before opening up his own store. After Murphy's death, two former McCrory executives, John S. Mack (1880-1940) and Walter C. Shaw (1883-1951), purchased the small chain of G.C. Murphy Co. stores in 1911. They quickly made it a profitable business as 5c-10c-25c stores. Soon more Murphy stores appeared as they expanded to new areas or bought smaller competitors. Despite the Depression, the company grew, and soon there were 181 Murphy stores in eleven states. Following World War II, the number of stores increased through acquisitions in the Midwest and South. By 1976, Murphy's seventieth anniversary, the company operated 529 stores. Efforts to keep the company independent were not successful, and Ames Department Stores Inc. of Rocky Hill, Connecticut, purchased the G.C. Murphy Co. in 1985. The Murphy's variety store division of Ames was sold to the parent company of McCrory stores in 1989. Carrying massive debt as the result of several complicated stock transactions in the 1980s and 1990s, and overextended on credit, McCrory Corp. filed for bankruptcy in 2001 and liquidated a short time later.

The National Recovery Administration was a U.S. government agency established during the Great Depression by President Franklin D. Roosevelt (1882-1945) to stimulate business recovery through fair-practice codes. The NRA was created by the National Industrial Recovery Act, which was passed to resuscitate the economy through the establishment of codes of fair practices that would set prices, production levels, minimum wages, and maximum hours within each industry. The NRA also supported workers' right to join labor unions and collectively bargain, and it sought to stabilize the economy by ending ruinous competition, overproduction, labor conflicts, and deflating prices. The agency ultimately established codes that affected about 22 million workers. Companies that subscribed to the NRA codes were allowed to display a Blue Eagle emblem, as a symbol of cooperation with the NRA. The NRA ended when it was invalidated by the Supreme Court in 1935, but many of its provisions were included in subsequent legislation.