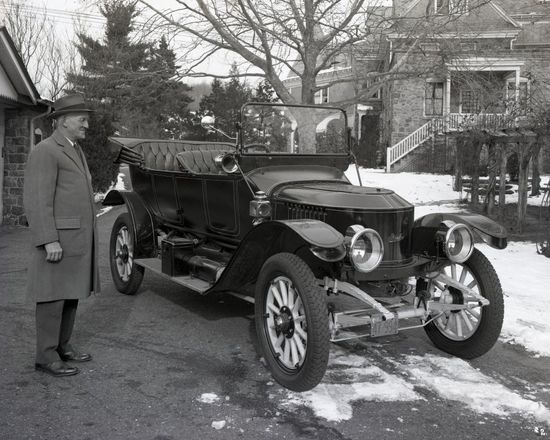 The collection primarily consists of images featuring the Marshall family and their relatives and friends, both in formal group portraits and more casual poses.

Thomas C. Marshall, Jr.’s family has lived in the area now known as Yorklyn, Delaware since the mid-1700s. In 1890, Tom’s grandfather, Israel W. Marshall, formed a partnership with his brother, T. Elwood Marshall, and Franklin Ewart. They purchased the former Garrett paper mill in Yorklyn, renaming it the Marshall Brothers Paper Mill. In 1897, Israel built a Victorian mansion, now known as Auburn Heights, on a hill overlooking the paper mill. This mansion has remained in the family to the present time, belonging first to Israel’s son, T. (Thomas) Clarence Marshall, and later to his son, Thomas C. Marshall, Jr.

T. Clarence Marshall was a man of many hobbies. He was a steam automobile and railroad enthusiast, as well as an enthusiast of trapshooting and an avid photographer. T. Clarence purchased the first automobile in Yorklyn in 1904, and later became dealer in Stanley Steamer cars, selling them from 1910 to 1920. Marshall also acquired a large personal collection of Stanley Steamers, dating from 1902 to 1922. From the late 1940s onward, T. Clarence Marshall acquired and built small-scale locomotives and railroad tracks on his property, creating a miniature railroad, which he opened on occasion to the public along with an automobile museum.

The collection primarily consists of images featuring the Marshall family and their relatives and friends, both in formal group portraits and more casual poses. It features a large number of images of Tom Marshall, Jr., with the majority of these being pictures from his first two years. Both Auburn Heights, the Marshall home, and the Marshall Brother's Paper Mill appear in a number of images. These include both interior and exterior views of the buildings. Mill workers are featured in some of the photographs, normally posed formally in groups or next to pieces of machinery. Other Delaware buildings that appear in the collection include the Yorklyn Railroad Station, the Garrett Snuff Mills, the Wilmington Friends School and assorted houses and other buildings around Yorklyn. Another series of images features buildings in Chester County, Pennsylvania, which were taken by T. Clarence Marshall around 1915 and used in preparation for a production of "Story of Kennett," given at Longwood in 1933. These include images of the Anvill Tavern at Longwood, The Turk's Head Inn in West Chester, views of Chadd's Ford and assorted other homes, meeting houses, and roads.

Automobiles are also featured in a number of images. Many images of the Marshall family and their friends include one or more of the Stanley Steamer automobiles which T. Clarence Marshall sold and later collected. Individual automobiles are also featured, as are images of Marshall's collection of Stanley Steamers in front of the automobile museum he established at Auburn Heights. Another of Marshall's interests, trapshooting, is also well represented in the collection, with both group portraits of participants at the Yorklyn Gun Club and individual photographs of men shooting and holding rifles. A series of miscellaneous images including natural scenes, boats and waterfront views and pictures of buildings and amusements at the 1904 Louisiana Purchase Exhibition in St. Louis round out the collection.