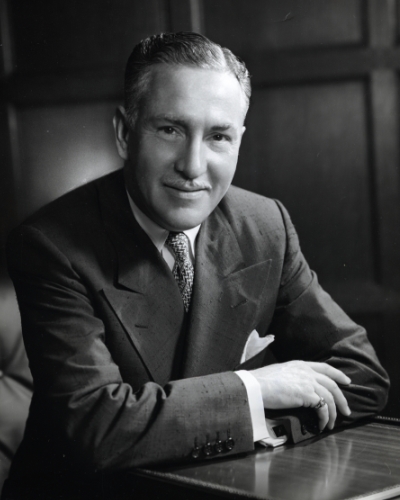 John McShain was born in Philadelphia on December 21, 1898, the son of immigrants from County Derry, Ireland. His father was a carpenter with a small business and well established as a builder of Catholic churches, schools, rectories and convents. When his father died in 1919, John McShain left college in order to return to Philadelphia and take over the construction business. In 1929 he received his first major contract from the City of Philadelphia. McShain was active in Pennsylvania Republican Party politics during the 1930s, 1940s and 1950s. He was a member of the Philadelphia Zoning Board from 1936 to 1956 and a member of the Housing Board from 1942 to 1946.

McShain opened branch offices in Washington, D.C. (1935), Trenton, New Jersey (1936), and Baltimore (1937). In 1939 he received the contract to build the Franklin D. Roosevelt Library at Hyde Park, New York. During the 1940s and 1950s McShain became one of Washington's most visible and successful building contractors. His projects included the Jefferson Memorial (1939), the State Department Building (1940), National Airport (1941), the Internal Revenue Building (1942), the Pentagon (1943), the Army Map Service Building (1943), the White House renovation (1950-1951), the John F. Kennedy Center for the Performing Arts, and the National Shrine of the Immaculate Conception.

In the 1940s, McShain invested some of his profits in the hotel business. After 1951, McShain became actively involved in the world of horse racing. He purchased the Barclay Stables in Philadelphia and hired Vincent O'Brien, one of the most successful trainers of the period. McShain bought an estate in Killarney, Ireland, in 1959 and retired there in 1965, although he continued to manage his business from there until 1974. During these years, McShain devoted more time to his outside interests, particularly Catholic charities and education. He died in Killarney on September 9, 1989.

In 1927, McShain married Mary Josephine Horstmann (1907-1998) the daughter of a Philadelphia wool merchant. Mary McShain was active in a number of local Catholic charities. They had one child, Pauline Mary (1928- ), who entered the Convent of the Holy Child Jesus in 1946 and served principally in education and church administration.

The collection contains graphic materials documenting John McShain's family life and personal interests, his career as a building contractor, and his involvement in horse racing.

A large portion of John McShain's personal photographs are portraits and snapshots of himself and his family through the years, including his parents and siblings, his wife Mary Horstmann McShain and the Horstmann family, and his daughter Pauline (Polly). These include major family events such as John and Mary's wedding, anniversaries, birthdays, and milestones in Polly's life, such as her entrance into the convent. There are also numerous snapshots of the McShains with family and friends, including New Year's Eve celebrations, dinners, vacations and other leisure activities, as well as pictures of their homes: their house in Overbrook, Pennsylvania, their apartment in the Barclay Hotel, Philadelphia, and their country retreat in Ireland, Killarney House. There are also photographs of the McShains with business associates, religious leaders, and other public figures, including Popes, American presidents, and the president of Ireland, Sean T. O'Kelly. Many items document John McShain's deep involvement with the Catholic Church, including photographs of Knights of Malta, Men of Malvern and other Catholic organization's events; a private audience with Pope Paul VI; and a papal blessing. There are also photographs from other associations John McShain was involved with such as the Beneficial Savings Fund, Philadelphia, and the Union League of Philadelphia. Miscellaneous items include prints of historic automobiles and locomotives and one of a Cessna Skynight airplane.

A large bulk of the collection documents John McShain's career as a building contractor. For the most part, McShain's company built public buildings, schools, churches, hotels, and shopping centers, etc. The photographs are primarily of the buildings before, during, and after construction. For many of the buildings, there are pictures of the groundbreakings, dedications, and cornerstone layings. Presidents Harry Truman, Dwight Eisenhower, and Franklin D. Roosevelt, and Vice-President Richard Nixon are pictured in these ceremonies for many of the major buildings in Washington, D.C. Most of the buildings in the collection are located in New Jersey, Maryland, Pennsylvania, and Washington, D.C., where offices were maintained, but a few are in California, Connecticut, Delaware, and Florida. Major projects in Washington, D.C. include the White House Renovation, the Pentagon (no construction views), the Jefferson Memorial, the National Shrine of the Immaculate Conception, the General Accounting Office, the Department of State Building, the National Airport, the National Institutes of Health, the National Naval Medical Center, and the Senate Office Building, among others. There were also numerous projects in and around Philadelphia, John McShain's hometown, including St. Joseph's College, La Salle College, Rosemont College, the United States Naval Hospital, the Municipal Court House, and the Board of Public Education Building. The collection also includes photographs and proofs used in the production of the book, Thirty Years of Building Progress, which documents the buildings and structures constructed by John McShain, Inc. up to the year 1954.

Many photographs in the collection document John McShain's interest in horse racing. Many pictures are of race horses owned by John McShain and his Barclay Stable, including his two most victorious horses, Ballymoss and Gladness. There are also numerous victory photographs from the years 1953 to 1973, as well as photographs of various races, the McShains at races, the Irish trainer Vincent O'Brien and his family, and trophies the Barclay Stable won.

The films in the collection consist of home movies of the McShain family and footage of various horse races. The family films document each of Polly McShain's birthdays, other family events, and vacations, from the 1920s through the 1960s. There are also videotapes of family-produced movies about Mary McShain and the Horstmann family, and of John McShain's funerals in Killarney, Ireland and Philadelphia. One film covers the history of the Killarney House in Ireland, from its earliest history until its ownership by the McShain family. The other films in the collection are primarily of various horse races in the United States and England. There are, however, also films with President Franklin D. Roosevelt at the FDR Library in Hyde Park, New York. The collection also includes several sound recordings of horse races in which Ballymoss and Gladness participated.

Many of the films have been transferred to Beta and VHS videotape.