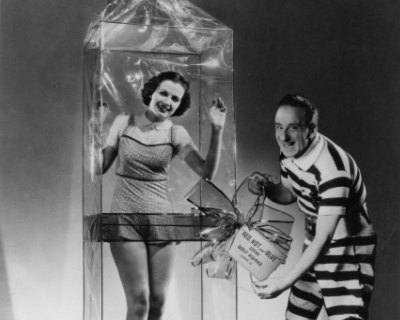 The External Affairs Department was responsible for all company advertising, publicity, and public affairs for E.I. du Pont de Nemours & Company, a chemical company more commonly referred to as the DuPont Company. The collection consists of departmental photograph reference files covering a wide array of the company's activities. It is a comprehensive resource for images showing manufacturing processes, DuPont Company industrial plants and office buildings, aerials and exteriors, employee group and individual executive portraits, and product shots. The bulk of the images date from the 1940s through the 1990s.

The External Affairs Department was responsible for all company advertising, publicity, and public affairs for E.I. du Pont de Nemours & Company, a chemical company more commonly referred to as the DuPont Company. The department was created on January 1, 1986, by the merger of the Marketing Communications and Public Affairs departments.

The DuPont Company began as a manufacturer of black powder. Throughout the 1900s and 1910s, the company shifted its focus away from gunpowder production and toward chemistry innovations. By the time the External Affairs Department was established, the DuPont Company was introducing thousands of products and patent applications each year. The DuPont Company lists its involvement in fifteen main industries. These include agriculture, automotive, building and construction, chemicals, electronics, energy, food and beverage, government and public sector, healthcare and medical, marine, mining, packaging and printing, plastics, rail, and safety and protection.

The collection consists of the DuPont Company External Affairs Department photograph reference files covering a wide array of the company's activities. It is a comprehensive resource for images showing manufacturing processes, DuPont Company industrial plants and office buildings, aerials and exteriors, employee group and individual executive portraits, and product shots. The bulk of the images date from the 1940s through the 1990s.

The collection is comprised of two sets of materials; one set was at some point assigned identification numbers (IDs), while the other set was not numbered. However, both sets cover the same time span and subject matter, and so have been integrated. The original IDs have been maintained in the finding aid; not all items have an ID.

The collection has been organized into seven series: Archives, Awards, Events, People, Plant sites, Products, and Publications. The organization and terminology are based on an incomplete inventory that accompanied the identification-numbered set that assigned categories and subjects. All of the series are arranged in alphabetical order.

The Archives series consists of materials related to the founding of the DuPont Company as a gunpowder manufacturer. The images are related to the Eleuthrian Mills Hagley property, which is now Hagley Museum and Library. There are images of company founder E.I. du Pont, other du Pont family members, and their homes. Some images show gunpowder workers and their homes, the gunpowder mills, and gunpowder products. Most of the images are undated and are reproductions.

In 1991, the DuPont Company began hosting an annual two-day series of events to celebrate the life and legacy of Dr. Martin Luther King Jr. The program varied from year to year, but often included interfaith concerts, musical tributes, a multicultural legal clinic, children's events, social justice lectures, and community forums. There was always an "Educational Convocation" followed by a "Day of Celebration." Begining in 2006, the city of Wilmington, Delaware, began co-sponsoring the annual program and encouraging community-service projects and involvement. The collection contains images and videotape recordings of the two main events.

In 2002, the DuPont Company celebrated its 200th anniversary. There are photographs of events, and several videos created for these events. A book was also created to commemorate the anniversary. A few images from the Dupont Company's 150th anniversary in 1952 show a marker being placed at Hagley Museum and Library.

The Tour DuPont was a cycling stage race sponsored by the DuPont Company, where national amateur teams took part alongside professional teams. These images are primarily slides taken of the 1991 race, which was the first race DuPont sponsored. There are some images from the 1992 and 1993 races. The images show the pre-race set-up, the competitors' bikes racing on the road, the finish line, awards, and press conferences.

The People series consists primarily of individual portraits of executives, as well as group portraits of the board of directors and executive and finance committees. There are a few portraits of significant scientists and employee group portraits. The images included in this series place primary subject or focus on the portrait sitter (images of people in the Plant sites series feature the plant site as the subject, with employees shown outside the building or working inside it). The images are photographic prints and negatives; in most cases, the negative matches the print or contact sheet. Slides are unique images. The bulk of the materials dates from 1949 to 1998, with a few items dating between 1903 and 1946 and a few to the 2000s. The series is arranged in alphabetical order by the individual's last name or group name.

The Plant sites series consists of images of DuPont industrial sites and office buildings, both in the United States and at international locations. The images included in this series feature the location or worksite as the primary subject or focus; this includes factory or office interiors, which depict manufacturing processes and office work. The employees are not the focal point of the images. Often (though not always), the employee is unidentified; in some cases, the employee may even be a model, not an actual employee. The purpose of the image is to highlight the process of the work or the workplace itself.

Plant sites are arranged by the plant's most commonly used plant name, with the location in parenthesis. A few of the DuPont plants have multiple names; in these cases, each name has been supplied. Some plants have multiple laboratories on the same site; for example, both Jackson Laboratory and Chambers Works are located at the Deepwater Point Works and are listed under the letter "D."

The images exist in several different formats: photographic prints, negatives, transparencies, and slides. Sometimes there are negatives or slides for photographic prints or contact sheets; there are often unique images in unique formats. There is an imbalance of coverage. Some plant sites have only a single image, while others have a considerable number of views. Some only have a picture of a sign for the plant or an aerial, while others document numerous buildings and processes.

There are a large number of aerial photographs of plant sites and exterior views, as well as interior views of empty spaces and interiors showing employees working. There is documentation of the manufacturing process for some products. When a specific plant is identified, images of that plant are filed under the plant site name; if there is no plant associated with the images, they have been organized by product name.

The Products series consists primarily of slides related to agricultural products and fibers. There are photographic prints in this series; however, the images are largely unique. The products cover a wide range, with some images related to DuPont products in general, such as transporting or selling products.

The agricultural products in this series highlight the DuPont Company's herbicides and insecticides for farmers and vegetation management. The images are of farm crops, machinery, and activities such as cultivating, strip cropping, planting, applying herbicides, crop dusting, and harvesting. There are many images of weeds and insects that harm typical crops, such as apples, corn, rice, soybeans, and wheat. There are numerous images of herbicide packaging containers and farmers with signs for herbicide products in their fields.

The fiber products highlight several of the DuPont Company's textile achievements; most heavily represented are Nylon, Kevlar, Teflon, and Mylar. There are two general fiber/textile history slide albums (removed from binders for preservation purposes) that document the DuPont Company's work with fibers from the 1930s through the 1960s, and into the 1980s. In 1934, chemist and inventor Wallace Hume Carothers (1896-1937) produced the first polyamide fiber, later known as Nylon. Nylon was introduced in 1938 and was primarily used to make women's hosiery and lingerie. The success of Nylon propelled DuPont toward developing numerous other synthetic fibers such as Orlon, Lycra, Tyvek, Nomex, and Kevlar. There are images of Carothers and other prominent scientists, as well as key products made using Nylon fiber, such as fashions, household items, and World War II gear. Notably, there are images from the 1939 World's Fair, and women lined up to buy Nylon hosiery after its return to the market after World War II.

Other significant images related to fiber are photographic prints of the 1969 Apollo Moon Landing. The NASA moon walk suits used DuPont Teflon, Kapton, Mylar, Dacron, Neoprene, Nylon, Nomex, and Lycra. There are also slides of three aircraft designed by Paul B. MacCready, built using DuPont Kevlar, Nomax, Delrin, Teflon, and Mylar. In 1979, MacCready designed and built the Gossamer Albatross, a human-powered aircraft, then the Gossamer Penguin, a solar-powered experimental aircraft, and in 1980, the Solar Challenger, a solar-powered electric aircraft.

Of particular interest are a series of photographic prints and corresponding negatives documenting the use of DuPont explosives at Ripple Rock. Ripple Rock is an underwater mountain in the Seymour Narrows of the Discovery Passage in British Columbia, Canada. It had two peaks during low tide that produced large turbulent eddies from strong tidal currents. It was extremely hazardous for ships to pass the straight. Between 1875 and 1958, at least 120 vessels were damaged or sunk; at least 110 people drowned during these accidents.

Two previous attempts to remove the twin peaks failed. The Canadian government carried out a three-year, $3 million project to do so, using more than 1,400 tons of blasting agents supplied by the DuPont Company of Canada Limited in 1956. Water-tight cans of explosives were pushed into the cage at the collar of a 570-foot vertical mine shaft on Maud Island, about 120 miles northwest of Vancouver, British Columbia. The explosive was used to blow the top off Ripple Rock and a two-headed underwater mountain in Seymour Narrows, a part of the inland waterway to Alaska. The blast was a complete success, providing a safe channel fifty feet deep at low tide. In 1958, it was the largest non-atomic explosion fired anywhere on the planet. There were 370,000 tons of rock shattered.

The Publications series documents selected (and often alternative) images that correspond to published materials. Formats in this series are primarily slides, transparencies, and negatives. Boxes in this series are stored almost entirely in remote Cold Storage and require 48 hours' advance notice for access.

There are three stories from Better Living [f HD9651.9.D94 A14] magazine dating from 1966, 1969, and 1971, all related to DuPont employees teaching science to middle and high school students. View this publication online in the Hagley Digital Archives.

There is a set of negatives and a few photographic prints for a booklet titled This Is DuPont: Equal Opportunity [f HD9651.9.D94 A5]. View this publication online in the Hagley Digital Archives.

Boxes in the Publications series are located in remote storage. Please contact staff 48 hours in advance of research visit at askhagley@hagley.org