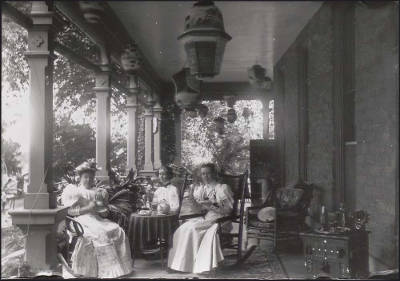 The Cedar Grove Mills came to specialize in mattress ticking, which was the principal product line from the 1840s until World War II. During the Civil War the firm manufactured woolen blankets for the war effort. In 1876 the Whitakers expanded into carpet manufacture through the purchase of the Tremont Carpet Mills in Frankford. After World War II the firm went into decline as the mattress ticking business moved south. The mills closed for the last time in 1970.

The collection consists of photographs related to the family of William Whitaker. A number of the photographs feature buildings and bridges in and around Cedar Grove, Pennsylvania, now a part of Philadelphia. William Whitaker's mansion is featured in several of these images, with family gathered on the porch. Interior views of homes are also part of the collection, at least one of which features the Whitaker's sitting room. These are filled with Victorian furniture and plants and were taken circa 1890. An exterior view of Cedar Grove Mills, the main textile mill operated by William Whitaker & Sons Inc., also appears. Whitaker family members and friends are also featured in the collection, but few are identified beyond Robert and Middy McDaniel Whitaker and Roland White. Mr. White appears in photographs with his steam automobile, and two other steam automobiles are also featured. Finally, two images of a parade in Philadelphia celebrating the end of the Spanish American War are also in the collection.