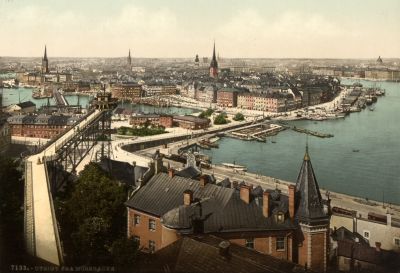 The Morris family of Philadelphia were brewers, merchants, land speculators, manufacturers, and prominent participants in public affairs. This collection contains fourteen albums of photographs and postcards of foreign scenes between 1881 and 1906.

The Morris family of Philadelphia were brewers, merchants, land speculators, manufacturers, and prominent participants in public affairs, dating back to Anthony Morris, a Quaker, who emigrated to Burlington, New Jersey in 1682, relocating to Philadelphia about three years later. John Thompson Morris (1847-1915) founded the Morris Arboretum in Germantown, Pennsylvania and served as overseer of public schools in Philadelphia. He and his sister Lydia (1849-1932) traveled around the world together on several Grand Tour trips from 1881 to 1906.

Fourteen albums represent the foreign travels of John T. Morris and his sister Lydia Morris, occurring from 1881 to 1906. The collection consists of 1,564 original photographs, in color and in black & white. 1194 are scenes from Europe, including Great Britain, Spain, Switzerland, and Italy; the Middle East, including Egypt, Syria, and Tangiers; and the Far East, including India, Ceylon, China, Singapore, and Japan. 370 represent art from foreign galleries, and 78 postcards include 28 in color.

The albums are bound in 3/4 morocco, and the photographs average 13 3/4" x 12". Included are 4 panoramas and 9 other extra large prints. The prints are high quality, were purchased abroad, and are in excellent condition. The albums are folio-sized, with cover titles stamped in gold, feature gold-edged pages and marble paper inside front and back covers.