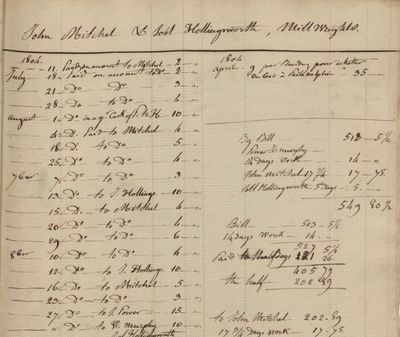 E.I. du Pont de Nemours & Company is a chemical company more commonly referred to as the DuPont Company. The company was established in 1802 by Pierre Samuel du Pont de Nemours (1739-1817) and his son Éleuthère Irénée du Pont (1771-1834) for the production of gunpowder. The papers in this collection date from the lifetime of E.I. du Pont and document important aspects of the early history of the DuPont Company.

E.I. du Pont de Nemours & Company was organized in Paris in 1801 by Pierre Samuel du Pont de Nemours (1739-1817) and his son Eleuthère Irénée du Pont (1771-1834). The next year, E.I. du Pont purchased a mill site on the banks of the Brandywine River just north of Wilmington, Delaware, and began making preparations to establish a black powder manufactory. During the winter of 1802 to 1803, E.I. du Pont recruited a small workforce and began building the company's mills. By the spring of 1804, gunpowder was being produced, and the company had secured a commitment from President Thomas Jefferson to purchase DuPont gunpowder for the Army and Navy. With this contract in place, the company started to recruit immigrant Irish workers for the mills and hired its first independent sales agents.

During the War of 1812, DuPont became a major supplier of gunpowder for the U.S. government as its total sales exceeded 500,000 pounds. After the war, the company expanded rapidly as it began selling large quantities of powder to coal mine operators and railroad entrepreneurs. In 1837 Henry du Pont, E.I.'s son took over the management of the company and began to rationalize the company's managerial practices. During the Civil War, DuPont became the largest supplier of powder for the Union Army, and in the late 1860s and 1870s, it used its wartime profits to purchase control of many of its competitors.

This collection covers the period 1799 to 1834 and includes some of the earliest and most valued records of E.I. du Pont de Nemours & Company. It embraces the full span of the American career of Eleuthère Irénée du Pont (1771-1834), founder of the powder company. The most significant single item among these papers is the original act of association by which the company was founded, signed at Paris in 1801. Other important early DuPont Company documents are an 1808 copy of the articles of agreement made in connection with the Talleyrand loan, as well as documents supplied in an 1817 Chancery suit against the company by Peter Bauduy. Also included are early personnel ledgers (1811-1815).

The papers reflect important financial and legal aspects of E.I. du Pont's career, especially as head of the powder company. The scope of the collection may be summarized under the following headings: on may be summarized under the following headings: (1) administrative problems, as reflected in correspondence of E.I. du Pont with his managers, Charles François Parent, Raphael Du Planty, and James Antoine Bidermann, and with his brother, Victor du Pont; (2) shareholders of the parent company, Du Pont de Nemours, Père et Fils & Cie, who, in turn, held shares in the powder company; (3) partners in the firm of E.I. du Pont de Nemours & Co., especially Peter Bauduy; (4) agents for the sale of Du Pont powder; (5) the operations of competitors in the manufacture of powder; (6) relations with the War and Navy Departments regarding contracts; (7) explosions and the financial losses entailed by them; (8) sources of capital and raw materials, especially the Talleyrand loan of 1807; (9) personal correspondence of E.I. du Pont with important figures, some of whom were in official positions; and (10) papers referring to the cotton factory of Du Planty, McCall & Co., and to the woolen factory of Du Pont, Bauduy & Co.

Those which may be identified, though in some instances are only tentatively, within the Longwood Manuscripts are: file 2 (papers relating to the suit of Madame Bureaux de Pusy), file 10 (papers relating to the equipping and payment of volunteers in 1815), file 69 (papers concerning the suit of Peter Bauduy), file 93 (papers of Du Pont, Bauduy & Co.), file 118 (accounts, 1810), and file 121 (papers concerning the suit against Charles Munns).

This collection should be used in conjuction with certain pertinent portions of company records found in the Longwood Manuscripts and the Henry Francis du Pont collection of Winterthur Manuscripts, and with the Records of E.I. du Pont de Nemours & Co.