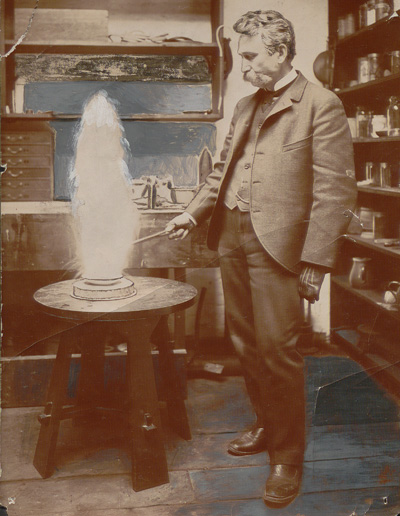 Hudson Maxim (1853-1927) was an inventor and chemist best known for his work in the development of smokeless gunpowder and military explosives. This collection includes a copy of an agreement between Maxim and E.I. du Pont de Nemours (October 17, 1897), whereby Maxim sold to the company his patents for smokeless powder. Also included is correspondence with du Pont family members and government agencies related to smokeless powder; the machine gun designed by Maxim; and Maxims's book, Defenseless America, an anti-pacifist polemic.

Hudson Maxim (1853-1927) was an inventor and chemist best known for his work in the development of smokeless gunpowder and military explosives. He was born in Orneville, Maine, on February 3, 1853, to Isaac Weston Maxim (1814–1883) and Harriet Boston Stevens (1815–1901). He was the sixth of eight children in a poor, but mechanically gifted family that also included his eldest brother, the inventor Hiram Stevens Maxim (1840-1916).

Hudson’s first career consisted of a brief, failed attempt as a traveling medical lecturer and patent medicine salesman peddling 'Maxim’s Lightning Cure' panacea, produced in partnership with Alden W. Knowles (1853-1904), a childhood classmate. In 1881, he and Knowles abandoned this effort to form the small firm of Knowles & Maxim, a publishing and ink manufacturing enterprise based out of Pittsfield, Massachusetts. On January 19, 1885, Hudson married his first wife, Pittsfield resident and school teacher Jane A. Morrow (1862-1920).

By 1886, the partnership of Knowles & Maxim had dissolved, though Hudson continued the work as the sole proprietor of the Real Pen Work Publishing Company. In June 1888, however, Hudson Maxim left the United States for London to work for Hiram Maxim. Beginning in the early 1880s, Hiram had begun conducting research that would lead to the invention of the Maxim gun, the first truly efficient automatic machine gun. While working for Hiram, Hudson began his own career as a chemist and inventor, with both brothers working toward the goal of improving existing formulas for smokeless gunpowder. In 1888, Hiram Maxim took over the Swedish inventor and industrialist Thorsten Nordenfelt’s (1842-1920) Nordenfelt Guns and Ammunition Company, established the previous year, to form the Maxim-Nordenfelt Guns and Ammunition Company. Hudson was soon sent back to the United States as the new company’s American representative.

Hudson continued experimenting on his own with explosives, securing his first patent in 1889. After his contract with Hiram expired in 1891, Hudson established the Columbia Powder Manufacturing Company to manufacture dynamite at a plant near Farmingdale, New Jersey. Around this same time, Jane and Hudson separated. She remained in Pittsfield, where she formally took over operations of the Real Pen Work Publishing Company and gave birth to the couple’s only child, Hudson Day Maxim (1891–1971), born on May 28, 1891, a short time after their separation.

Jane and Hudson formally divorced in 1893. That same year, the Columbia Powder Manufacturing Company failed, emerging following reorganization as the Maxim Powder Company. In 1894, during an experiment into producing smokeless powder with mercury fulminate, Hudson lost his left hand in an explosion. Despite this setback, Hudson continued his experiments and received several patents between 1893 and 1895. He also became the first manufacturer to successfully produce smokeless powder in America. Hudson also returned periodically to England throughout the 1890s, where he attempted to set up companies to manufacture explosives, calcium carbide, and, at the suggestion of his nephew, Hiram Maxim’s son, the inventor Hiram Percy Maxim (1869-1936), automobile engines. None of these efforts were successful. Hudson laid the blame on his brother Hiram’s interference. Hiram, in turn, accused Hudson of profiting off Hiram’s name in the United States by using the moniker ‘H. Maxim’ in advertisements and on patents that Hiram believed he deserved claim to. These disputes would result in a permanent rift between the brothers.

On March 26, 1896, Hudson remarried. His new wife was the much younger Lillian Durban (1875-1952), a scholar and linguist from London. In 1897, Hudson sold his most important patents to E.I. du Pont de Nemours & Company. As part of the exchange, the company established a laboratory and summer home for him at Lake Hopatcong, New Jersey. Maxim continued to produce inventions relating to explosives, ordnance, and torpedoes through the 1910s, but he also wandered down many blind alleys, including Maxim-feast, a soybean-based food supplement, and the Game of War, a supposed "improvement" on chess. He also expanded on a second career, begun in the late 1890s, as a public speaker and inveterate writer of magazine articles and letters to the editor, freely venting his opinions on poetry and language, as well as invention, progress, and public affairs. Beginning in 1914, he vociferously argued for American rearmament against a wide array of Progressive-era pacifists and took up work for the Naval Consulting Board. After the war, he concentrated on the development of the Lake Hopatcong area and on local affairs.

Maxim also helped organize the Maxim Munitions Corporation in 1915, hoping that it would assume the promotional burdens while he concentrated on inventing, but he soon withdrew when its managers tied his name to a scheme to turn water into gasoline. Hudson Maxim died on May 6, 1927. His widow continued to live in their home in Hopatcong until her remarriage to law professor Michael Francis Dee (1874-1953) in 1932.