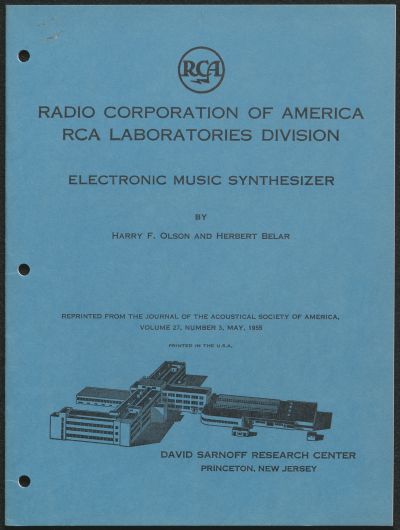 Herbert Belar (1901-1997) was an inventor and research scientist in the field of acoustical engineering at the RCA David Sarnoff Research Center in Princeton, New Jersey for thirty-eight years. He developed "hi-fi" recording, the phonetic typewriter, and the electronic music synthesizer. This small collection of Herbert Belar papers reflects the professional daily work of an acoustical engineer from the 1930s through the 1960s. There is significant documentation on the phonetic typewriter, the 200 speech communication system, the music composing machine, and the electronic music synthesizer. Notable inclusions are information related to the development of "hi-fi," film motion pictures sound recording, and phonographic records recording. There is only one file that discusses Belar's work at the MAD Laboratory.

Herbert Belar (1901-1997) was an inventor and research scientist in the field of acoustical engineering at the RCA David Sarnoff Research Center in Princeton, New Jersey for thirty-eight years. He developed "hi-fi" recording, the phonetic typewriter, and the electronic music synthesizer. Belar was born in Laibach, Austria-Hungary (now Ljubljana, Slovenia) to Albin Belar (1864-1939) and Frances Thomann Belar (1880-1971). At thirteen he entered the Austrian Naval Academy, and graduated in 1917.

He immigrated to the United States in 1919. He earned a bachelor’s degree in engineering from Drexel University in 1928, and was promptly hired by RCA Victor Photophone in Camden, New Jersey. Belar spent the first year of his employment completing the General Electric Advanced Course in Engineering in Schenectady, New York, before returning to Camden. During World War II Belar was part of a secret RCA working group called “MAD Lab.” At the "MAD Lab" he worked on projects as part of the war effort for the military between 1942 and 1943.

He was transferred to RCA Laboratories in Princeton in 1948, where he worked in acoustics under Harry F. Olson (1901-1982) for almost twenty years. While at RCA Laboratories, Belar collaborated with Olson to develop the first musical synthesizers: the RCA Mark I and Mark II. Together they also devised a music composing machine and a phonetic, or voice activated, typewriter. Belar authored one book and co-authored, with Olson, three books and eleven journal articles. He was also issued over forty patents and was one of the scientists appointed a Fellow of the Technical Staff when the title was created in 1959.

This small collection of Herbert Belar papers reflects the professional daily work of an acoustical engineer from the 1930s through the 1960s. There is significant documentation on the phonetic typewriter, the 200 speech communication system, the music composing machine, and the electronic music synthesizer. Notable inclusions are information related to the development of "hi-fi," film motion pictures sound recording, and phonographic records recording. There is only one file that discusses Belar's work at the MAD Laboratory

Engineering memorandum and designs series consists of engineering memoranda from General Electric from 1928 to 1935 and RCA engineering designs and memoranda from 1938 to 1966. The RCA material consists of designs of filters, speech input and recordings, and film reproduction equipment. There is some information related to information theory and advanced development records and phonographs. There is considerable information on the 200 syllable communication system from 1964 to 1965, with some material dating from 1962. Additionally there are thirty-six photographs of the music composing machine and phonetic typewriter.

The Prints series is called "prints" to be in keeping with the title used by the creator; the materials are graphs, circuit diagrams, data sheets, and parts lists. Some folders include design layouts, formulas, block diagrams, and additional notes. The materials date from 1938 to 1967 and were organized by year by the creator. The early years tend to contain work related to several different projects which are noted for each folder, such as amplifiers, modulators, and phonograph recording. As each year progresses, his work becomes more focused on one specific project such as the phonetic typewriter, syllable selector, speech analyzer, phonetic typewriter III, and the 200 Syllable Communication System. For each project year, the work may be for one project, however, include many different aspects and parts (one folder could contain over a hundred pages of documentation). Notably in 1940, Belar did audio engineering work for Diseny's "Fantasia" road show equipment (the documentation is small in quantity, but not quality). The materials in this series are highly technical in nature and may require some familiarity with engineering.

"Special" / career highlights series consists of materials that marked significant achievements or career milestones, were designated by the creator to be of particular interest or are of a personal nature. A portion of the materials were originally in a folder marked "Special" and have been arranged into three subseries imposed by the archivist in order to preserve the original order by the creator. The subseries are: Personal, Highlights, and Sound.

The Personal subseries contains a ten-page biography written by one of Belar's daughters. There is his 25 years of service at RCA certificate and dinner program from 1953, as well as his certificate from Sigma Xi. In 1966 upon Belar's retirement he was given a retirement farewell booklet containing many letters from colleagues reflecting on their careers together and wishing him well in retirement. There is a report titled "The Herbert Belar Electron Bugle report" which appears to be humorous in nature, bound like an official report, but intended as a joke. In 1968 RCA celebrated its 25 Anniversary of RCA Laboratories with a commemorative book. The book was sent to Belar with a thank you letter from the RCA President Jim Hillier and Vice President, George Brown. There are two recordings on reel-to-reel, one is of Christmas Carols, and the other is children voices and was re-recorded from a wire recorder. The latter is dated between 1945 and 1948. There is one phonographic record, an RCA Red Label of Claude Debussy's Clair de Lune, recorded in 1947.

Highlights subseries has an album of thirty-two of Belar's patents and an album of newspaper clippings and magazine articles about Belar's work, primarily related to the electronic music synthesizer and the phonetic typewriter. The articles date from 1954 to 1982. There are few full magazines included and the page of the article that references Belar is notated on the front cover. Both albums were originally in 3-ring binders and were removed from the binders for preservation purposes, the original order of the albums has been maintained. There are three additional files included in this series. Belar's personnel file which contains promotion letters, organizational charts, employment agreements, and job descriptions. The folder on File systems is a copy of ledgers that documents Belar's research from 1948 to 1963. There is one folder of information related to Belar's work on the MAD Project and it contains a few brief summaries about the project and a chronology.

Sound subseries primarily relates to the music synthesizer, but does contain some materials on "hi fi," sound on film, and the phonetic typewriter. The first three folders were bound together: Origin of Stereographic Sound; Origin of High Fidelity; and Synthesis of Music. These folders contain research articles and, in some cases, additional handwritten notes. There are several recordings of the music synthesizer between 1952 and 1961. There are four phonographic records and five sound tape reels. The sound tape reels have an accompanying handwritten explanation written by Belar in 1995 at the request of his daughter. There are letters from Belar he wrote to M.W. Scheldorf in response to an inquiry about sounds of music. In 1955 RCA released a four phonographic record box set with a booklet titled; "The Sounds and Music of the RCA Electronic Music Synthesizer." It features narration about the characteristics of musical sounds and musical excerpts demonstrating the synthesizer. Additionally, there is a 16mm film which contains a test method for audio sound on film. There is a videocassette (VHS) copy of the film in the collection. Finally, there is a script for practicing the phonetic typewriter.

RCA reports consists of ten technical reports. There are nine reports that are a series of quarterly progress reports and then a final report for the Study of Speech Compression Systems (Syllabic Compression Techniques) the study goes from 1962 to 1964 and was performed by Belar and his colleagues R. de Sobrino, E.S. Rogers, and E.G. May. There is one report from 1960 on Speech Research Assignments.

Reprints series consists scientific publications primarily of articles authored or co-authored by Herbert Belar, but occasionally about his work, or just of interest. The publications date from 1932 to 1965. Many are duplicates of articles found elsewhere in the collection. The topics covered are film recording, "hi-fi," the phonetic typewriter, electronic music synthesizer, acoustic sound reproduction, and sound analysis.