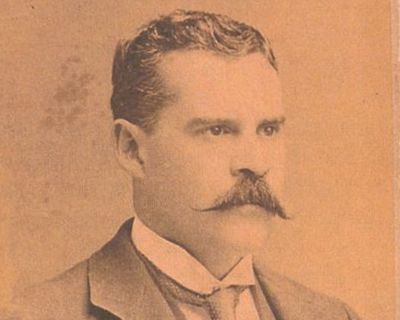 Simon Bolivar Camacho (1859-1906) was a traveling sales representative for the American Bank Note Company, a dominant American producer of bank notes, stock and bond certificates and similar commercial paper. The collection includes his diaries between 1892 and 1904, mostly relating to business travels in Latin America, but also containing information on daily events in the New York City area, news of the day, and domestic, personal and religious reflections.

Camacho was born on April 24, 1859 at Caracas, Venezuela, the son of Simon Pablo Camacho y Clemente (1824-1883) and his American wife Maria L. Skidmore (1833-1924). He was the great-grandnephew of Simon Bolivar (1783-1830), the Liberator, being a descendant of Bolivar's sister. His father moved to Peru and was resident for a time as Peruvian Consul-General at New York. Simon B. Camacho was naturalized as an American citizen at New York City on June 3, 1880 at the age of 21.

Camacho gravitated to business in international sales and finance. In June 1884 he took a job with the American Bank Note Company as a traveling sales representative. The American Bank Note Company was the dominant American producer of bank notes, stock and bond certificates and similar commercial paper, and Camacho's assignments took him on frequent trips to Latin America, but also Europe, making connections and closing deals. This often involved travel to remote areas, such as by river into Paraguay, and to areas wracked by political unrest and local revolutions.

The death of his wife from pneumonia on February 12, 1903, while he was traveling in the Mediterranean, appears to have affected him deeply. Never in the best of health himself, he spent his last year on business in South America, where he contracted meningitis. He returned home and died at St. Vincent's Hospital in New York on February 8, 1906 at the age of 46.

The small pocket diaries begin in January 1892 and run through 1904, about thirteen months before his death. There is no diary for 1893, when Camacho was working for the Western National Bank and Hamilton Bank Note Company. The diaries were clearly carried on Camacho's business trips, both around New York and to foreign countries for the purpose of recording his business activities. As such they shed light on the type of networking and hustling required of a sales representative.

However, the diaries are much richer, as Camacho recorded all sorts of personal observations on things ranging from the weather through the hardships of travel, the state of his health, family and domestic relations, and participation in the rich cultural life of New York City, to personal introspections. Given his mixed heritage as the child of the elites of two hemispheres, Camacho comes across as a person equally at home in both worlds.

The diaries contain observations on such political events as the 1896 McKinley-Bryan presidential contest, the Spanish-American War, U.S-Cuba relations, and the various Latin American revolutions and coups that interrupted his travels.

There are also entries illustrating Camacho's traditional Catholic piety and his musings on sickness and mortality. His reflections on the loss of his young wife are particularly poignant. At the other extreme, he repeats poems and risqué limericks shared with his business associates. Taken together, the diaries yield a well-rounded picture of a somewhat atypical but fully-alive salesman at the turn of the nineteenth century.

Included with the diaries is a typed transcript made by his grandson; also scans of portraits of Comacho and his wife, a page containing his work and wage history, and a poem about a gentle llama and a hungry condor, which is almost certainly an allegory of the War of the Pacific in which Chile seized Peruvian and Bolivian territory, and which may have been written by Camacho, Sr., who was living in Peru when the war broke out.

There are loose papers of Camacho's running from his baptismal certificate to his death certificate, his marriage certificate and a small sample of correspondence, mostly written on his travels in Latin America and one when courting his wife-to-be. The letters written from South America in 1904 to 1905 reflect his continued mourning for his wife and his own declining health. There is a small selection of letters written by his father in the 1880s and copies of newspaper obituaries of Camacho, his wife and father.