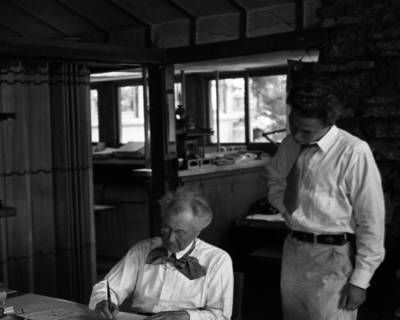 The John Gordon Rideout papers illustrate the career of John Gordon "Jack" Rideout (1898-1951), a noted industrial designer. Rideout began his career in sales, moved into advertising, and eventually opened industrial design firms in Toledo and then Cleveland, Ohio. Highlights of the collection are images of Skippy Racer, perfume atomizers designed for DeVilbiss, the Shell-Back metal chair designed for Calumet Chair Company, and his classic re-design of Magnalite Cookware for the Wagner Manufacturing Company.

John Gordon "Jack" Rideout (1898-1951) was an industrial designer who began his career in sales, moved into advertising, and eventually opened industrial design firms in Toledo and then Cleveland, Ohio.

Rideout was born in St. Paul, Minnesota. The only child of Dr. John Byron Rideout and Annie Grant Hill, his education began at St. Paul’s Academy - a college preparatory school. At an early age “Jack”, as John Gordon was known at home, was interested in building and design. According to his biographical outline, he was determined to be an architect, taking courses in manual and fine arts in high school. Graduating in 1916, he thought practical experience in the field would be more beneficial than additional schooling. Rideout began working as an apprentice for Whitehouse and Price, an architectural firm in Spokane, Washington. This short career ended during World War I; on September 12, 1918 Jack enlisted in the Navy. Taking advantage of furthering his education at the cost of the government, he studied steam engineering at the University of Washington’s Officers Material School. Upon completion, Rideout would have been given a commission as Lieutenant J.G., which ultimately did not come into fruition. When the war ended in 1918, John Gordon Rideout was granted an early discharge the following year in order to avoid serving in peacetime.

When John Gordon returned home after being discharged, responsibility of supporting the family fell squarely on his shoulders. His father, Dr. J. B. Rideout, a noted St. Paul dentist, became an invalid and was no longer able to provide for the family. Working as an architect in the building trade was the experience he had been striving toward, but the pay was not adequate to support himself and his parents. Redirecting his career, he took a job with M. F. Patterson Dental Supply Company as an advertising manager. Rideout also organized and ran a private printing plant for the company. During this time, he became the president of the Advertising Club of St. Paul. This experience sparked his interest in typography and, in 1925, he left Minnesota for a job in Chicago. Gaining employment with one of the largest paper manufacturers in the country, Brander Smith & Co., Rideout acted as their advertising and sales promotion manager. Through this phase of his career, John Gordon Rideout was appointed the Chicago Secretary of the American Institute of Graphic Arts in New York, and was involved in the formation of the Chicago Society of Typographic Arts.

Three years of hard work and saving money enabled Rideout to resign from his position with Brander Smith & Co. and simultaneously enroll in the Art Institute and the American Academy of Art. With diligent attention, he condensed three years of course work into eighteen months. In August of 1928, John Gordon took a three month leave of absence from the Charles Daniel Frey Advertising Agency where he was the assistant art director, to study and sketch in England and France. When he returned to Chicago in October, his position had been filled because of increased business. Undeterred, and nearly doubling his salary, Rideout put his skills to work for Schwartzkopf Studios in Toledo, Ohio, receiving praise in the commercial studio field as their art director.

However, Rideout was determined to be an architect and to design three-dimensional objects. In 1930. he left the typography and advertising world and focused specifically on design. That year, the census lists him living at 2148 Glenwood Ave., Toledo, Ohio, as head of the household, with his mother. From 1930 through the end of his career, John Gordon Rideout submitted over fifteen patent applications for consumer goods made from specialty alloys and plastics, rubber, and steel.

Toledo’s School of Design was bustling in the 1930s and held exhibitions featuring designs of students and notable designers. Exposure to the free-flowing ideas of fellow designers gave way to an atmosphere of great creativity. Rideout dedicated the next four years to establishing the industrial design firm of Van Doren and Rideout. Their designs for American National Company’s Skippy Racer, Toledo Scale Company’s Sentinel Duplex Scale, and Air King’s Skyscraper radio were recognized by Depression-era consumers as streamlined and practical. Rideout believed that efficient and proper design of the functional parts of an object would appeal to the consumer.

In 1936 Rideout left the partnership with Harold Van Doren to form John Gordon Rideout and Staff. Relocating to Cleveland, he hired Arthur N. BecVar (1911-2003), who had studied at Notre Dame, Perdue University, and Charles University in Prague. Ernst Payer, who was born and educated in Vienna and studied under Frank Lloyd Wright at Harvard University, was also invited to join the new company; he accepted without hesitation. This move also brought John Gordon closer to his fiancé Alice Chalifoux (principal harpist with the Cleveland Orchestra 1931-1974), whom he married in 1937.

John Gordon Rideout and Staff enjoyed the success of numerous patented designs. The classic metal Shell chair for Calumet Manufacturing Corporation began with a series of patents. The patent for the chair back was submitted to the United States Patent Office on May 30, 1939 and, in November 1940, he submitted designs for the arm rest. John Gordon Rideout would now bring his dream of becoming an architect into fruition by designing his new home. A stunning mid-century modern marvel that was part of the Moreland Hills residential sub-division, fourteen miles east of Cleveland. In a chapter of Engineering Opportunities edited by R.W. Clyne, John Gordon states quite succinctly that, the crux of the whole matter is simply this: in the last analysis, the study of art is the study of the emotional effects of visual phenomena. The function of the artist in industry is to study the product in question from every angle and then, through his knowledge of the emotional effect of visual phenomena impart to that product the quality of appealing to the senses as distinguished from but not in violation of pure logic. Magnalite Cookware, patented by the Wagner Manufacturing Company, was made from a magnesium-aluminum alloy and had flameproof handles and vapor tight lids. Rideout was hired by Wagner to re-design their tea kettle. His classic streamline design of the kettle has been featured in design exhibitions in New York at the Museum of Modern Art, and the Brooklyn Museum.

In 1944, Rideout was instrumental in the formation of the Society of Industrial Designers. While 1946 sees the closing of his office in Chagrin Falls, Ohio, relationships with clients were maintained. John Gordon submits patent applications for chairs on behalf of Gendron Wheel Company during February and March of 1947. Gendron (successor to the American National Company) was familiar with Rideout’s work on children’s scooters, sleds, wagons and tricycles. Rideout had envisioned an invalid-chair: a wheelchair that would collapse easily for storage and transportation, be comfortable for the patient, and, above all else, be affordable. On October 18, 1949, he was issued a patent for his wheelchair, which was an exemplary design. Meanwhile, Rideout redesigned the B. F. Goodrich Company trademark, which had faced serious identity and branding issues. The company’s trademark – two red diamonds on the sidewall of their tires, along with a portion of the company name underlined – cost B. F. Goodrich $25,000 in annual fees. Rideout’s elimination of these elements increased the trademark’s identity value by 42%.

Recognized in the architectural and industrial design fields as an artist and engineer, the Toledo Museum of Art issued John Gordon Rideout a Certificate of Merit in 1931 and showcased some of his designs in an exhibition titled ‘The Alliance of Art and Industry: Toledo Designs for a Modern America’ in March of 2002. The Metropolitan Museum of Art, and the Museum of Modern Art hold John G. Rideout designs in their collections. In 1941 the Cleveland Press praised Rideout’s design for his new home located in the Moreland Hills Village of Cleveland. The house was designed overlooking the Chagrin River Valley. The living room, with its unusual shape, stunning view, and 10 ½ foot ceiling provided excellent acoustical qualities for Mrs. Rideout’s music.

Suffering from hypertension, John Gordon Rideout died in Cleveland, Ohio, on May 22, 1951 at the age of 53.

Series I. Manuscripts are arranged alphabetically, and then chronologically.

Series II. Prints are arranged alphabetically, and then chronologically.

Series IV. Objects have been measured, described, and housed together.

Original file titles have been kept.

The John Gordon Rideout papers document the growth of an industrial designer during the 1930s and 1940s. A pioneer in industrial design, Rideout was among the first to understand the use of molded materials in the aesthetic value and strength of consumer goods. His use of modern plastics was innovative, as seen on the control knobs of the Modernaire Heater and the handles and lids ofMagnalite cookware. The collection contains correspondence with clients regarding proposed projects, as well as letters regarding a discrepancy concerning royalties. Images of drawings and sketches, publications on typography and graphic arts, and three dimensional objects complete the collection.

The first series consists of manuscript material containing biographical information written by John Gordon Rideout. Correspondence with Buda Company contains a patent issued to them for an industrial truck, which Rideout designed. It was the last project Rideout brought to completion. Letters between Herbert Donnelly detail a dispute regarding royalties, and correspondence with Metaplast Corporation contain a licensing agreement. A series of prints contains numerous drawings and sketches, negatives, photographs, as well as a portfolio. There is also a series of typography articles, reprints of articles written about and by Rideout, as well as newspaper articles. Lastly, a small series of three dimensional objects consists of atomizers and giftware designed by Rideout. Of note are the pen nibs Rideout used during his career.

Select images can be viewed online in Hagley's Digital Archives.

Alyce Rideout donated her father's papers to Hagley Museum and Library in 2017.