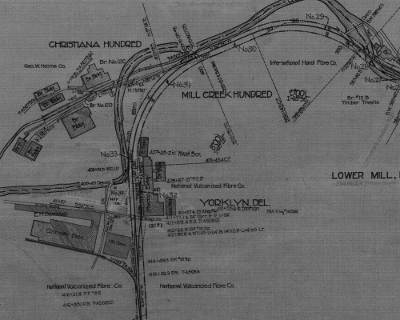 Chartered in 1869, the Wilmington & Western Rail Road Company formed to create a rail line connecting Wilmington, Delaware, with Landenberg, Pennsylvania. A non-profit organization, Historic Red Clay Valley, Inc. (HRCV)., formed in 1960 and today operates the line as a heritage railroad. The collection includes eight maps of the line created by the Interstate Commerce Commission in 1918 and two publications concerning the history of both the Wilmington & Western Railroad line and HRCV.

Robert E. Wilhelm, Jr. (1952-), has been a member of Historic Red Clay Valley Inc. since the mid-1980s, serving at times as a board member and as the organization's Director of Administration. Until 2002, he maintained a diesel engineer's certificate, steam locomotive fireman's certificate, and conductor's certificate with the Wilmington & Western Railroad. He continues to be involved with the organization researching and writing on relevant historical topics and participating in various educational activities and efforts.

Chartered in 1869, the Wilmington & Western Rail Road Company formed to create a rail line connecting Wilmington, Delaware, with Landenberg, Pennsylvania. The line opened in 1872. The Baltimore & Ohio Railroad Company (B&O) purchased it in 1883 and operated it as the Landenberg Branch of the Baltimore & Philadelphia Railroad, a company fully owned and run by the B&O. The B&O stopped passenger service on the line in 1930, while freight service continued to the 1970s. In 1942, the B&O abandoned the western portion of the branch from just east of Southwood, Delaware, to Landenberg, Pennsylvania. In 1957, the company abandoned the section of track from west of Valley Road in Hockessin, Delaware, to the end of line at Southwood, reducing the line to 10.2 miles in length.

In 1960, the Historic Red Clay Valley, Inc. (HRCV) was incorporated as a non-profit organization "to promote interest in and engage in the operation of early transportation (particularly railroads); to preserve and restore historic sites and buildings; to establish and operate museums; and to issue such publications relating to the Red Clay Creek Valley as the members deem fitting and proper; all for the public welfare and for no other purpose."¹ The organization began steam passenger train service for tourists on the Landenberg Branch in 1966.

While the B&O had continued freight service on the branch, in the 1970s the company filed with the Interstate Commerce Commission (ICC) to abandon the rest of the branch as unprofitable. The HRCV, however, was able to purchase the remaining 10 miles of track in 1982. The Wilmington & Western Railroad, under the umbrella of HRCV, continues to operate as a heritage railroad.

This collection is comprised of digital access copies. The collection includes eight valuation maps created by the Interstate Commerce Commission (ICC) in 1918 for the Wilmington & Western Railroad, Baltimore & Ohio Railroad, Landenberg Branch. The V-8.3 sheets cover the railroad from the Delaware-Pennsylvania state line to Landenberg, Pennsylvania. The V-9.4 sheets cover the railroad from the west end of Wilsmere Yard (Route 141) to the Delaware-Pennsylvania state line. Also included in the collection are two publications authored or edited by Robert E. Wilhelm, Jr., concerning the history of both the Wilmington & Western Railroad line and Historic Red Clay Valley, Inc. (HRCV).