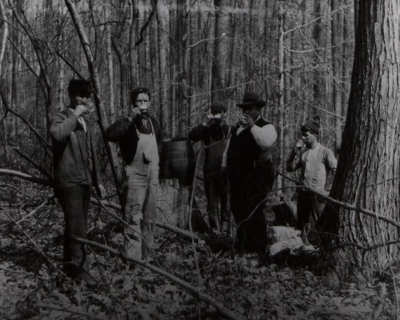 Hagley Museum staff conducted a series oral history interviews between 1954 and 1990, speaking primarily with individuals who had worked at the DuPont Company powder yards on Brandywine Creek during the yards’ final decades of operation or who had lived near the yards as spouses or children of DuPont Co. workers. Some of the individuals who were interviewed donated, lent for copying, or provided information on the photographs in this collection. The images primarily depict the worker communities which surrounded the E.I. du Pont de Nemours & Company powder yards on Brandywine Creek or the powder yards themselves.

Hagley Museum staff conducted a series oral history interviews between 1954 and 1990. The staff primarily spoke with individuals who had worked at the DuPont Company powder yards on Brandywine Creek during the yards’ final decades of operation or who had lived near the yards as spouses or children of DuPont Co. workers. The interviews addressed the time period from approximately 1900 to 1960. The interviews were conducted to support the museum’s programs and interpretation as well as to collect and preserve first-hand accounts of work and daily life in New Castle County, Delaware and Chester County, Pennsylvania in the first decades of the twentieth century. Some of the individuals who were interviewed donated, lent for copying, or provided information on images in Hagley Library's collections.

E.I. du Pont de Nemours & Company was established in 1802 by Pierre Samuel du Pont de Nemours (1739-1817) and his son Éleuthère Irénée du Pont (1771-1834). The du Ponts purchased the Eleutherian Mills site on the banks of Brandywine Creek just north of Wilmington, Delaware. In 1813, E.I. du Pont expanded downstream by purchasing what became Hagley Yards. During wartime the company was a major supplier for the United States government. During peacetime, the company marketed their product towards sportsmen and hunters. Throughout much of the nineteenth century, the powder-making operation on the Brandywine expanded as the company acquired many buildings that had begun as other industrial sites. At one time, the Brandywine works comprised four main yards: Eleutherian Mills (also known as Upper Yard), Upper Hagley Yard, Lower Hagley Yard, and Lower Yard, which was located on the eventual site of the DuPont Co. Experimental Station.

By the early twentieth century, the company had begun to shift its focus away from gunpowder production and towards chemistry innovations. In 1903, DuPont Co. established an experimental laboratory in the Rokeby Mill building downstream from Hagley Yard, and, after that building burned down in 1906, moved its facilities across the river to form the Experimental Station. The company closed the Brandywine powder yards in 1921, having remained open for the course of the First World War, and in 1926 the company formally dissolved its entire powder production unit.

The industrial villages along Brandywine Creek grew up in tandem with the powder mills and other nearby mills, and they were populated largely by Irish, French, and Italian immigrants and their descendants. By the 1890s, several distinguishable neighborhoods existed near the powder yards. On the west bank of Brandywine Creek, these included Wagoner's Row, the Upper Banks, Free Park, Squirrel Run, and Henry Clay (which encompassed Breck's Lane, Creek Road or Main Street, and Rising Sun Lane). On the east bank, there was Chicken Alley, Duck Street, Charles's Banks, and Walker's Banks.

The community was served by the Wilmington and Northern Railroad and, beginning in 1907, trolley service in Henry Clay was provided by the Peoples Railway. In the 1890s, the Breck's Mill building in Henry Clay became known as the Hagley Community House and was a community focal point, serving as a recreation center and social hall. The Eleutherian Mills residence on company property likewise served for a time as a DuPont Co. employees' clubhouse and was converted into military barracks during the First World War. The villages largely diminished with the closing of the powder yards.

The collection is arranged alphabetically by name of the individual who donated, loaned, or contributed notes on the images.

The more than 180 discrete images in this collection primarily depict the worker communities which surrounded the E.I. du Pont de Nemours & Company powder yards on Brandywine Creek or the powder yards themselves in the final decades of the yards' operation.

The worker communities' images contain photographs of powdermen, other workers, and their families. These include images of local music groups, the Meadowbrook Club Fife and Drum Corps and Alfred I. du Pont's orchestra. Many images depict the villages of Henry Clay and Walker's Banks, including photographs taken from nearby Rockford Tower. Some of these photographs show floods or ice jams on Brandywine Creek. Others show workers' houses; businesses in Henry Clay, Delaware, including Sam Frizzell's store, Toy Tavern, and Breck's Lane cooper shop; and railroad tracks, road construction for a streetcar line, and New Bridge Station near Rising Sun Lane. There are also photographs of Rockford Park, including of the construction of Rockford Tower. Others depict churches and schools including the Brandywine Manufacturers' Sunday School, St. Joseph's-on-the Brandywine Roman Catholic Church, and students at Alexis I. du Pont School. There is also a photograph of houses in the Upper Banks community after the 1890 explosion at Eleutherian Mills powder yard. Also included is a copy of a ticket to the 1893 second annual ladies reception of the Brandywine Club and a map of Squirrel Run village based on a hand-drawn map by former resident Elizabeth Beacom.

Other photographs in the collection relate to the DuPont Company Brandywine powder yards or Experimental Station. The powder yard photographs depict the the following buildings: New Machine Shop, Machine Shop office, Graining house, rolling mills, Birkenhead mill, the Cannon house near Christ Church, and the saltpeter refinery at Eleutherian Mills. Also appearing in these images are the Hagley entrance gate, Blacksmith Shop gate, Hagley dam, Upper Yard dam, the Lower Yard, a graining mill explosion at Eleutherian Mills, a coal car in Hagley Yard, and a traction engine designed by Alfred I. du Pont. Powder yard workers also appear in the photographs, including foundry yard workers, farm workers, and others. The Experimental Station photographs depict the ballistics laboratory, powder testing area, and the station as seen from nearby Rockford Tower.

Of the images in the collection that do not depict the worker communities or powder yards, many depict scenes of Brandywine Creek, of which many were taken by Wilmington photographer Joseph A. Maybin. Also included are images associated with Alfred Irénée du Pont (1864-1935), and they depict a farewell party; powdermen outings; du Pont with powdermen at Cherry Island, Maryland or Ball's Neck, Virginia; and a female worker with oysters at the Ball's Neck, Virginia, estate of Jessie Dew Ball du Pont. There are also photographs of unidentified quarries and quarry workers, horse-drawn gunpowder wagons, Hagley workmen and a bartender in a Wilmington tavern, powdermen at a Club House near Thompson's Bridge, unidentified female workers, and the Edwin Zeuner family, who lived in Wilmington, Delaware.

Transfer from a set of Brandywine Valley stereo photographs (Accession 1970.134).

The materials in this collection are items transferred from the former Hagley File subject photograph file (Accession 1969.001) maintained by the former Hagley Museum & Library Pictorial Collections Department. They are images that were identified by Hagley Staff as being donated or loaned by individuals interviewed for the collection, Oral histories on work and daily life in the Brandywine Valley (Accession 1970.370). Additional images were included in the transfer which contained notes provided by the one of these individuals interviewed, although the images themselves did not necessarily originate with the individual.

Additional items identified as being donated by individuals interviewed were transferred from a set of Brandywine Valley stereo photographs (Accession 1970.134).