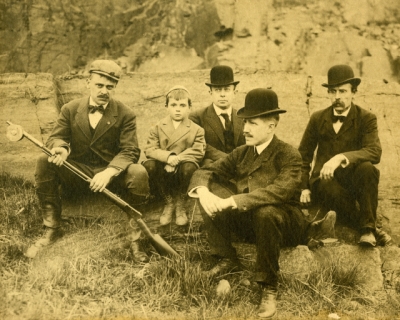 The Maxim Silencer Company was the first company to manufacture gun silencers for commercial use. The company was founded in 1908 as the Maxim Silent Firearms Company by Hiram Percy Maxim (1869-1936) in Hartford, Connecticut. In 1912 Maxim incorporated his business as the Maxim Silencer Company. Maxim was an engineer and inventor. This small collection consists of photographs of rifles with silencers, the company's World War II Army E. Navy award ceremony, and a few images of Hiram Percy Maxim and his son Hiram Hamilton Maxim.

Hiram Percy Maxim was an engineer and inventor. After graduating from the Massachusetts Institute of Technology in 1886 he worked for several companies as a mechanical and electrical engineer, primarily with automobile engines. He invented the silencer, patented in 1908 and the muffler for gasoline engines, patented in 1909.

Maxim was a hunter and a target shooter and wanted a way to shoot at his home without disrupting his neighbors. A Maxim Silencer Company brochure explains how the silencer works: "They [the gasses] are made to whirl around inside the Silencer. This whirling forces the gas to fly out from the center by centrifugal force leaving a central space, just the same as when water is whirled around in a set bowl, a hole or space forms at the center. This leaves the space for the bullet to make its passage. The gas cannot pass through this space, until it slows down. This causes it to discharge into the atmosphere gradually. This absolutely prevents noise and also reduces recoil over two-thirds."

During World War I the Maxim Silencer Company produced silencers for the United States Armed Forces snipers and sharpshooters. Commercial sales of the silencer ended in a few years prior to a 1934 law prohibiting private ownership. During World War II, the company produced engine-exhaust silencers for tanks, submarines and other vessels. After the war the company focused on manufacturing seawater-distillation units for ships. The company also produced snowblowers and automobile mounted snow plows.

Maxim was not the only inventor in the family; his father Sir Hiram Stevens Maxim (1840-1916) invented the Maxim Machine Gun and his uncle Hudson Maxim (1853-1927) was the inventor of smokeless gunpowder. Maxim married Josephine Hamilton (dates unknown), a suffragist in 1898. The couple had two children, a son Hiram Hamilton Maxim (1900-1992) and a daughter, Percy Maxim Lee (1906-2002). His son was also an inventor and his daughter was an active civic and political leader.

Like his father H. Hamilton Maxim attended the Massachusetts Institute of Technology. Upon graduation in 1921 he returned to Connecticut to work at the Maxim Silencer Company. When Maxim died in 1936, H. Hamilton Maxim took over as President until his retirement in 1960.

Hiram Percy Maxim is credited with fifty-nine patents. Maxim was also passionate about aviation, sailing and radio. He served as chairman of the Hartford Aviation Commission and aided in the construction of Brainard Field, a municipal aviation port in Hartford. He developed the first practical seawater evaporator for providing ships with fresh water. He operated an amateur radio station out of his home and co-founded the American Radio League. Both Maxim and his son worked on improving the portable Ham radio.

In 1956, the Maxim Silencer Company was sold to Emhart Manufacturing Company. Today the company operates as Maxim Silencers Inc. out of Houston, Texas.

There is an exterior view of the company building at 85 Homestead Avenue, Hartford, Connecticut in 1943 and an image of Leslie Knapp using a snow thrower.

There are thirteen photographs from the Army E. Navy Award ceremony for the Maxim Silencer Company, which show the exterior of the company building, employees being presented awards, employees in the audience watching the ceremony, and then some group photographs of employees and executives.