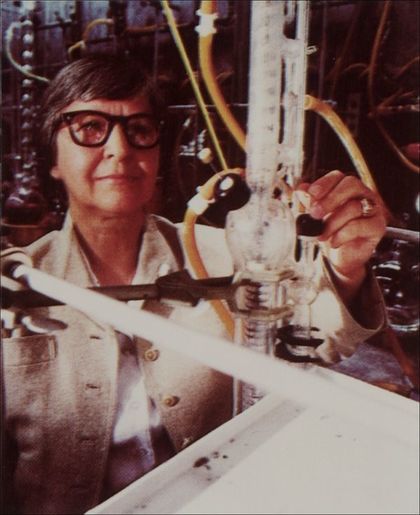 Stephanie Louise Kwolek (1923-2014) was an American chemist known for inventing Kevlar. She worked for the DuPont Company for forty years. Kwolek's main area of research was polymers, including high-performance fibers. This collection contains photographs, albums, slides and videotapes related to Kwolek's career and achievements, including her work on Kevlar.

Stephanie Louise Kwolek (1923-2014) was an American chemist known for inventing Kevlar. In 1946, after graduating from what is now Carnegie-Mellon University with a B.S. in Chemistry, Kwolek began her career as a research chemist at DuPont's textile fabrics laboratory in Buffalo, New York. She transferred to Wilmington, Delaware six years later when the Pioneering Research Laboratory opened. During her forty years at DuPont, Kwolek's main area of research was polymers, including high-performance fibers like Kevlar, for which she was awarded the patent in 1974.

The collection is arranged into five series: Personal photographs and snapshots; Awards and honors photographs; Presentation slides; Videotapes and Audio. The first three series are arranged chronologically. The Videotapes series is arranged alphabetically. There is only one audio cassette tape.

This collection contains photographs, albums, slides and videotapes related to Kwolek's career and achievements, including her work on Kevlar.

The Personal photographs and snapshots series includes portraits of Kwolek at various times throughout her career, primarily in the 1970s, a few from the 1980s and 1990s. There are two portraits of her mother, Nellie, as a young woman. Her brother Stanley appears in several snapshots at various events with Kwolek and other family members. There are several photographs of Kwolek with colleagues Paul Morgan and Herbert Blades and a few group portraits with DuPont staff members. There are slides from a trip to Japan in 1983, where she attended a seminar on polymer liquids. There are also snapshots from Kwolek's retirement party.

The Awards and honors photographs series contains both formal portraits as well as informal snapshots of Kwolek at several award presentation events such as the Kilby Award, Lavoisier Medal for Technical Achievement, the Perkin Medal, the Plastics Hall of Fame, and a photograph of Kwolek shaking hands with President Bill Clinton.

The Presentation slides series consists of three sets of slide presentations on Kevlar and polymers and one set of slides and some photographic prints of figures used for a publication.

The Videotapes series is comprised of award ceremonies, documentary specials containing interviews or appearances of Kwolek, and DuPont Public Relations video related to the invention of Kevlar.

The Audio series contains one audio cassette tape of the "DuPont Kentucky Derby."