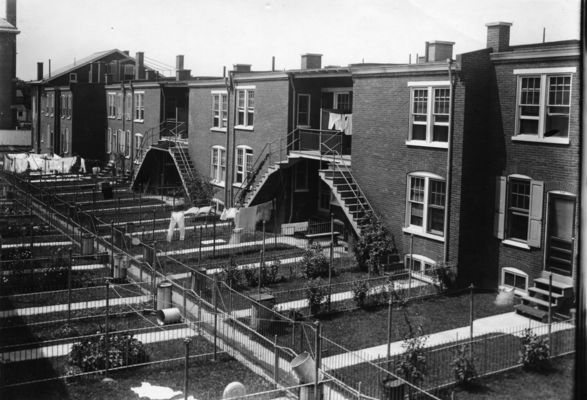 The Woodlawn Trustees, Incorporated, is a non-profit real estate development firm incorporated in Delaware on December 12, 1918, by textile manufacturer William Poole Bancroft (1835-1928). It subsumed Bancroft's earlier, for-profit venture, The Woodlawn Company which operated from 1901 to 1926. The Trustees are responsible for maintaining affordable housing in the city of Wilmington and for the orderly development of large tracts of suburban land, mostly located in Brandywine Hundred between Concord Pike and the Brandywine Creek and running north from Rockland Road into Delaware County, Pennsylvania.

William P. Bancroft was a founding member of Wilmington's Board of Park Commissioners and donated a large block of family land for Rockford Park. Bancroft was concerned about the orderly growth of cities and convinced that the city would soon outgrow its boundaries. He thus began to buy large tracts of farm land north and west of the city, which he intended to be developed in a planned, rational manner, with ample allowance for parks and other open space. In order to carry out these operations, he formed The Woodlawn Company in 1901. The company's first activities were within the city limits, where it built and rented the "Woodlawn Flats," blocks of row houses and apartments for working people between 1903 and 1914 and the Bancroft Parkway from 1912 to 1932, a tree-lined residential street with a wide planted median running north-south on the west side of town.

To carry out his larger goal of orderly growth after he was gone, Bancroft placed his land in trust. Local charitable organizations were to hold stock in the trust and use the income from real estate development to fund their activities. Active development of the rural properties was put on hold by the Depression and World War II, but thereafter the Trustees constructed a number of housing developments, including Alapocas, Woodbrook, Sharpley, Edenridge and Tavistock. Other land was banked by being leased for farming or as parkland. However, the Trustees discovered that the only way to subsidize their low-cost rental housing in the city and to remain solvent was to seek profits like any commercial developer. This meant constructing conventional suburban tract housing developments and strip malls aimed at middle class buyers.

This tension between the founder's vision and commercial reality came out in the open during the 1960s, compounded by contermporary developments in the Civil Rights movement. Although the Trustees bought out the failing Citizens Housing Corporation, which provided low-cost housing for African Americans on the city's east side, its suburban developments included the customary segregationist restrictive covenants. Pressure for change primarily came from the Wilmington Monthly Meeting of Friends, which sought to hold the Trustees to the founder's Quaker beliefs, and from Martha Ann du Pont, who sued the Trustees in 1972 to 1974 on the grounds that their refusal to sell a suburban house as a home for neglected children constituted racial discrimination. During the same period, the IRS challenged the Trustees' tax-exempt status.

By the mid-1970s, external pressures and the unsettled financial climate of recession and stagflation had pushed the Trustees into considering the sale of their remaining assets. However, beginning in the mid-1980s, renewed growth in the Concord Pike Corridor between Wilmington and West Chester, Pennsylvania, greatly enhanced the value of its holdings, although the development has taken the form of strip malls of national chains and big-box stores, with other land still banked for farming as a green buffer.

he 1960s and 1970s were years of challenge for the Woodlawn Trustees. They prepared volumes of information and documents used in the hearings for the revocation of Woodlawn's tax exempt status, and subsequent suits with the U.S. Government and the State of Delaware for back taxes, the claims of discrimination. The pressure was so great that in the 1970s the Trustees' were preparing plans to sell all of their assets. Woodlawn continues to plan and develop urban and suburban growth.

The growth continued into the next twenty-five years resulting in thorough development with residential and commercial structures. Due to the popularity of a "new" interstate highway with convenient exits to Brandywine Hundred, and with the focus of shopping shifting from Wilmington to the northern suburbs. Woodlawn promoted wise planning in the growth of the new commercial hub. Open space and greenways were integrated with the furious pace of construction of restaurants, hotels, office buildings, and professional businesses on lands leased or sold by Woodlawn.

Records consist primarily of 35mm slides, mostly dating from 1989 to 2002, documenting Woodlawn Trustees properties throughout Wilmington and Brandywine Hundred, including low-income city housing, preserved farmland, greenways along the Brandywine Creek, and commercial properties on Concord Pike and the Wilmington waterfront. Some of these images also exist as color photographic prints, enlarged to 8x10 or 11x14. A number of oversize display boards show photo collages and artist's renderings of Woodlawn Trustees projects, including Delamore Place, the Bancroft Parkway greenway, the "Flats" neighborhood, and planned development on Concord Pike.

There is also one box of photograph and negatives showing Wilmington neighborhoods in the early twentieth-century, circa 1910 to 1920. Areas pictured include Bancroft Parkway between Fifth and Seventh Streets, Rockford Tower, Rockford Mills, Alapocas and Wilmington Friends School.

25-year time seal from the date of creation due to privacy/security reasons.

Glass plate negatives DO NOT CIRCULATE.