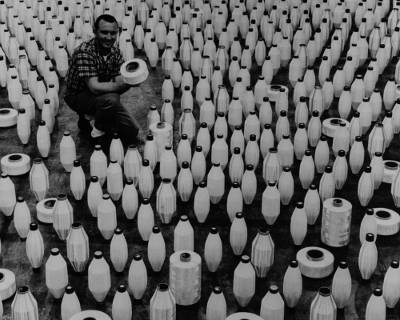 The Textile Fibers Department of the DuPont Company was established in 1936 as the Rayon Department, which specialized in researching and developing synthetic fibers for fabrics such as Nylon, Orlon, Dacron, and Lycra. The collection consists of oral history interviews conducted by Joseph Plasky, with former employees of DuPont's Textile Fibers department.

The Textile Fibers Department of the DuPont Company was established in 1936 as the Rayon Department, which specialized in researching and developing synthetic fibers for fabrics such as Nylon, Orlon, Dacron, and Lycra. The department was renamed in 1952 to reflect the wider range of fibers being produced and was renamed again in 1988, the Fibers Department.

The DuPont Company's entrance into the development and manufacture of textile fibers began with Rayon. The sythetic silk fiber, Rayon was developed in France in the 1880s. In 1920 the DuPont Company licensed a process for manufacturing Rayon. In 1925 the production of Rayon began at the Old Hickory, Tennessee plant. Rayon was produced until 1960. In 1961, the Old Hickory plant began the production of Dacron.

The Textile Fibers Department had two main research laboratories; the Pioneering Research Laboratory in Buffalo, New York and the Experimental Station in Wilmington, Delaware. In the 1950s, the Pioneering Research Laboratory was moved to the Experiemental Station. The research laboratories studied the physical properties of Nylon, Orlon, polyester, polyhydrocarbons, viscose rayon, vinyl polymers, cellophane, cellulose acetate, Dacron, and nitrocellulose. Many of the laboratory studies on carpet fiber, dyeing, knitting and washability investigated the relationship between polymer structure and fiber behavior.

The invention of each textile fiber developed in the research laboratories is unique and begins long before being released and marketed for commercial uses. Each fiber has mulitple uses, though Nylon, Orlon, Dacron, Qiana, and Lycra were all marketed as fabric in fashion clothing between the 1950s and the 1970s.

In 1939, the DuPont Company showcased Nylon women's hosiery at the Gold Gate International Exposition in San Franscico and the New York World's Fair. DuPont's first Nylon plant was in Seaford, Delaware which began operation in 1939. In 1941, DuPont opened a Nylon plant in Martinsville, Virginia which closed in 1998. In 1948, Nylon production began at the Chattanooga Plant in Tennessee which closed in 2015. The Chattanooga plant also manfuactured Qiana, a silky Nylon fiber which was introduced in 1968.

Orlon, a wool type fiber used for knitwear was trademarked in 1948. Orlon was produced at Camden, South Carolina and Waynesboro, Virignia until 1990. In 1951, Dacron, a type of polyester fabric debuted. Dacron was lightweight and durable, primarily used in clothing. In 1953, the Kinston, North Carolina plant opened for the manufacture of Dacron. The Kinston plant is still in operation, though it now produces Sorona. In 1968, DuPont opened the Cape Fear, North Carolina plant which was sold in 2001.

Lycra was introduced in 1959, and used primarily in undergarments, activewear, and swimwear. The DuPont Company launched the STAINMASTER® product line in 1986 in a successful attempt to provide consumers with stain-resistant flooring through the use of a Teflon® coating that made nylon carpeting much more resistant to stains.

DuPont formed a subsidiary for the Fibers Department called Invista in 2003 which was sold to Koch Industries in 2004. Products such as the Performance Fabrics developed by DuPont are now part of Invista.

The interviews are listed in alphabetical order by the interviewees last name.

The collection consists of oral history interviews, conducted between 2008 to 2019 by Joseph Plasky, with former employees of DuPont's Textile Fibers department. A former DuPont Company employee himself, Joseph Plasky interviewed individuals who worked in all sectors of the business, from research and engineering to marketing, during the period from approximately 1950 to 2000. The subject matter of the interviews focus on two significant technologies during the 1950s, Nylon and Dacron. Many interviewees also worked on Orlon, Lycra, Qiana, and Stainmaster.

Nearly 200 individuals have been interviewed by Plasky. The recordings cover a wide range of topics including plant construction, engineering, technical processes and details, manufacturing machinery and equipment, personnel, management, marketing, workplace safety, and women in the work place.

Some notable interviews include one with John "Jack" A. Krol, the former CEO and Chairman of the Board of DuPont and Tom McAndrews, the former Worldwide Director of the Flooring Systems Division of the Textile Fibers Department.

This collection is open for research. Some interviews are subject to a time-seal. Please contact the Audiovisual Collections and Digital Initiatives Department for access.

Sony Digital Voice files were migrated to WAV and MP3 for preservation and access.