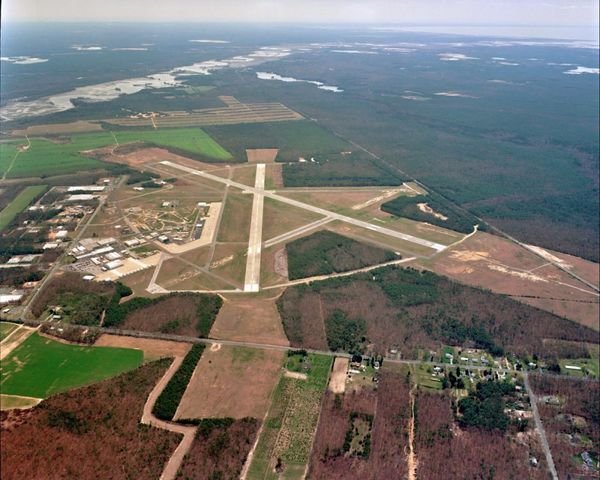 Charles Findeisen (1919-2007) was an aerial photographer hobbyist turned professional and spent most of his life flying airplanes. Findeisen consulted for real estate development concerns, engineering firms, and construction companies among others. Virtually all of his work was in the tri-state region of New Jersey, Pennsylvania, and Delaware.

This collection contains his aerial photography from 1962 to 2000. It is comprised mostly of negatives but does include some photographs. Many of his subjects were photographed over time at regular intervals. This is particularly true of real estate development programs and building projects. But there is also one-off material of current events, local places, and landmarks.

Charles Findeisen (1919-2007) was an aerial photographer hobbyist turned professional, and he was a resident of Oaklyn, New Jersey and spent most of his life flying airplanes. During the Second World War he was a radio operator in the 450th bombardment group of the 15th Air Force of the United States Army. In the 1950s, he began working for the South Jersey civil engineering firm of Taylor, Wiseman & Taylor as a draftsman until his retirement in 1984. Up to that point aerial photography had been a hobby for him, but after retirement he turned it into a business. His former employer then became one of his clients. A meticulous and detail-oriented record keeper, Findeisen also consulted for real estate development firms and construction companies among others. Virtually all of his work was in the tri-state region of New Jersey, Pennsylvania, and Delaware.

This collection is the aerial photography of Charles Findeisen (1919-2007). It is comprised mostly of negatives along with some photographs. The vast majority of the negatives are size 120, but there is a smattering of other sizes. Some ground shots are mixed in, but their percentage of the total volume of work is minor. The negatives and photographs are categorized by one of several options: the client or company for whom the shot was taken, the geographical location, the subject or landmark, or the person associated with property. Many of the negatives have coordinates associated with them; this information has been captured on the envelopes that house them but does not appear in the finding aid.

There are three properties that Charles Findeisen photographed heavily over many years. They are Greentree Village, Pureland Industrial Complex, and Village Harbor. The photography documents the growth and development of these properties over time.

Greentree Village was a mixed use real estate development by Lincoln Property Company in Marlton, New Jersey. It was built on land that had comprised the Roberts Farm, which was a local, family-owned farm and orchard that produced mostly apples and peaches. While the Roberts family sold their farm in 1974, work on Greentree Village did not begin until 1977. The community was completed in 1986 and included residential, commercial, office, and light industry uses. The earliest negatives in the collection were of the Roberts Farm taken in May of 1972 with the most recent being taken in March, 1993. The bulk of the photography was taken during the years of construction from 1977 to 1986.

Pureland Industrial Complex was established in the early 1970’s when 3,200 acres were assembled in Logan Township, New Jersey. The Pureland Association formed in 1973 and established a Declaration of Environmental Standards to protect property values. Dr. Jack McCormick, PhD. the first scientist with a doctorate in environmental science, completed the environmental studies for the project. Currently, Pureland consists of 12,000,000 square feet of space and houses over 180 companies; Pureland is the largest Industrial Complex in the State of New Jersey and one of the largest in the world. In terms of this collection, Findeisen photographs Pureland in September of 1972 through October of 1993. The bulk of the work is in Series I. and II.

Village Harbor is a residential developement that is part of Beach Haven West at the Jersey shore. It was developed by Lincoln Properties, LLC. Photography of Village Harbor began in April, 1967 and continued through July, 1986. The bulk of the work was done between 1978 and 1986.

The collection is divided into six series with the first four series defined chronologically: 1962-1978, 1979-1987, 1993-1994, and 1996-2000. These series account for the bulk of the collection and are home to all the negatives. The photographs are found in either the chronological series if there is a corresponding negative or in Series V if no negative exists in the collection. The final series consists of accounting documents and is the smallest in the collection.

Series I., 1962-1978 contains a mix of black and white and color negatives. While there are many subjects in Series I., the bulk of the photography is of Greentree Village (formerly Roberts Farm), Pureland Industrial Park (or Complex), and Village Harbor.

Series IV. includes color photography from the years 1996 to 2000 and contains the least amount of negatives in the collection. It is made up mostly of local airports along with a hodgepodge of other subjects.

Series V. contains black and white and color photographs that have no corresponding negatives in the collection. Highlights of this series include local airports (although many are unidentified); JFK Hospital (now Virtua Hospital) in Voorhees, NJ; the Penn Central railroad line in Trenton, NJ; Pureland Industrial Complex; the QE2 arrival in Philadelphia in 1982; and a couple of dramatic shots of the disabled Liberian oil tanker, Corinthos, at Marcus Hook following the collision with another ship, the Edgar M. Queeny, and the resultant fire. Other photographs are of various properties, landmarks, and municipalities. There are fifteen oversized photographs of various locations in southern New Jersey. This series also includes some non-graphic material in the form of maps, property brochures, and engineering reports concerning work at airports.

Series VI. is the smallest series in the collection. It contains oversized accounting ledger sheets for the aerial photography business from 1987 to 2002 which shows information related to film, mileage, aircraft, printing, postage, telephone, profit or loss, and remarks for each job.

Negatives are stored offsite in cold storage (Boxes 1-24). At least 24 hours notice required to allow retrieval of these items.

Local airports: Whether for personal interest or business reasons, Charles Findeisen took aerial shots of local airports. Many can be found in this collection. His work can also be found on a website entitled Abandoned and Little-Known Airfields: specifically, Echelon Airport, Pitman Airport, Manahawkin Airport and Pleasantville-Somers Point Airport/Nordheim Flying K Airpark.

Greentree Village: This multi-use real estate development in Marlton, NJ was built on the Roberts Family Farm and was a frequent subject for Charles Findeisen's camera. Here is a website dedicated to memory of that farm.