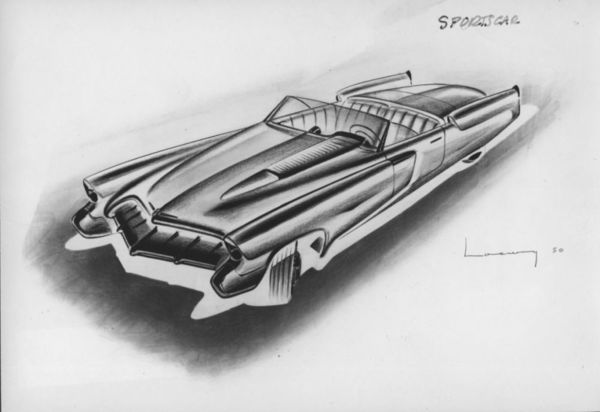 Raymond Loewy (1893–1986) was one of the most well know industrial designers during the middle decades of the twentieth century. This collection is composed of images of design work Loewy and his firm conducted for corporate American and foreign clients; Loewy's personal photographs; and his speeches and interviews.

Raymond Loewy (1893–1986) was one of the most well know industrial designers during the middle decades of the twentieth century. Born in Paris on November 5, 1893, he was the third son of Maximillian Loewy (1860-1919) and Marie Labalme Loewy (1867-1919) and grew up in a bourgeois household. As a boy, he developed an interest in transportation and machines. At age seventeen, Loewy enrolled in a pre-engineering school, an experience that prepared him for the technical aspects of an industrial design career.

After distinguished service in World War I, Loewy immigrated to the United States in 1919, hoping to find work at General Electric. He settled in New York City and for the next decade had a varied career as a fashion illustrator, window dresser, and costume designer, but primarily as a commercial artist, specifically an advertising illustrator. His clients included Saks Fifth Avenue, Bonwit Teller, the White Star Line, and Renault, and his images appeared in Harper's Bazaar, and Vogue. Advertising illustration made Loewy a well-paid professional, but his real interest was in industrial design.

In 1929 Loewy received his first significant product design commission from Sigmund Gestetner (1897-1956), an Englishman who was seeking to modernize the look of his mimeograph machine. Loewy encased the machine's working parts inside a sleek, modern-looking shell and sales were dramatically increased. This project launched Loewy on his new career of industrial design. During the early 1930s, Loewy also worked for Westinghouse and the Hupp Motor Company, where he designed the prize-winning Hupmobile. His major breakthrough came in 1934 when he received the opportunity to redesign the Sears Coldspot refrigerator, and signed a contract with the Pennsylvania Railroad that launched a two-decade relationship with the "Standard Railroad of the World."

Loewy's work for the Pennsy did much to establish his reputation as the leading figure in the century's most noteworthy American design style: streamlining. His streamlined locomotives and passenger car interiors came to symbolize machine age modernism, a look that defined his body of work and industrial design during the interwar years. His interiors, designed for ships of the Panama Lines, Lord & Taylor department stores, and the Missouri Pacific Eagle railcar were stylish and comfortable. Loewy's "Transportation of Tomorrow" exhibit at the Chrysler Motors Pavilion at the 1939-1940 New York World's Fair included a streamlined taxi, liner, car and trucks, as well as a rocket ship that would travel between New York and London.

Loewy reached his peak in the post-war decades when his office focused on the American consumer and the suburbs. His company expanded to its greatest dimensions at mid-century. It had hundreds of contracts with a wide array of consumer product companies for which Loewy and his associates designed home appliances, bottles, kitchen utensils, living room furniture, dinette sets, dishware, silverware, food and beverage packaging, radios, television, and stereo systems. By this time the Loewy firm employed a large staff of designers, but it was the Raymond Loewy name that attracted clients. During this period Loewy's partner William Snaith (1908-1974) and the firm's in-house architects designed shopping centers, department stores, hotels, and supermarkets.

Loewy opened his first international office in London in the mid-1930s. The firm designed petrol pumps and scales for the Avery Hardoll Company and automobiles for the Rootes group, and various packaging and appliances The London office was closed in 1939 due to World War II, but was reopened in 1947. He formed Compagnie de l'Esthétique Industrielle (CEI), in Paris, in 1952. CEI, a separate operation from the New York office, had been established to bring American-style industrial design to Europe. The office produced designs such as the Elna sewing machine, Le Creuset cookware, the Concorde for Air France, and various projects for Shell (such as corporate identity, gas attendant uniforms, and gas stations).

Transportation, particularly automobiles, was always one of Loewy's passions. After his design of the Hupmobile in the early 1930s, Loewy began work for Studebaker in 1936. His first project for Studebaker was the re-styling of the body of the 1938 President. A year later, the Champion was introduced, and both models boosted the company's image. The postwar Studebakers, particularly the 1947 Champion Regal Deluxe and the 1953 Regal Starlight coupe, had a strong influence on automotive design. Loewy's innovative design of the Avanti in 1962 was widely acclaimed.

Loewy's firm worked on a number of projects for the public sector, including habitability studies for the Navy, and trademark and identity programs for the Coast Guard, the Post Office, and other federal agencies. In 1962, Loewy redesigned Air Force One for President John F. Kennedy (1917-1963), changing the lettering and color scheme on the exterior, and redesigning the interior. Loewy believed that his most significant project for the government was his work with the National Aeronautics and Space Administration (NASA). From 1967 to 1973 Loewy was retained by NASA as a habitability consultant for the Saturn-Apollo and Skylab projects. His recommendations for Skylab included the inclusion of a window through which the astronauts could view earth, as well as proposals for the comfort and privacy of crew members.

In November 1973, Loewy traveled to the Soviet Union to negotiate an industrial design contract with Licensintoge, a government agency, and the All Union Research Institute of Industrial Design. This was an effort to assist the Soviet Union in an attempt to create consumer goods that could compete successfully in American and Western European markets, and to expand the Soviet capacity in industrial design. Loewy and the Soviets signed a multi-year agreement calling for scientific and design technology collaboration. In 1975, a five-year agreement between the U.S.S.R. and Raymond Loewy, International, Inc., USA was signed that broadened the original pact to include transportation design. Loewy was actively involved with the design of the proposed Moskvich automobile, but it was never produced.

Loewy's experiment with the Soviet Union marked the end of his industrial design career. Financial difficulties had beset the firm in the early 1970s and in 1975, Loewy attempted to stave off the monetary problems by merging all of his corporations into a firm called Raymond Loewy International. The following year, he and his wife Viola Loewy, had sold their shares in that business, and by 1977 Raymond Loewy International declared bankruptcy. The Loewys moved to France and entered retirement. In 1979 his book Industrial Design: Raymond Loewy was published and a portfolio of lithographs of some of his best-known designs were released. Loewy died on July 14, 1986 in Monaco at age 92.

Loewy's life was chronicled in magazines and newspapers. His homes, particularly Tierra Caliente in Palm Springs, appeared in numerous architecture publications. In 1931 he married Jean Thompson (1909-?), who was a partner in the design firm and played an important role in his early successes. They were amicably divorced in 1946. He married Viola Erickson (1922-1995) in December 1948. During their marriage, she played an increasingly significant role in managing company operations. Their daughter, Laurence Loewy (1953-2008), is the CEO of Loewy Design, a firm that is reintroducing Raymond Loewy's designs to a new generation.

This collection is composed of images of design work Loewy and his firm conducted for corporate American and foreign clients; Loewy's personal photographs; and his speeches and interviews.

The Corporate photographs series primarily consists of press release photographs documenting the wide range of Loewy's design work including transportation, products, packaging, interior design, automobiles, and the 1939 New York World's Fair. Particularly well represented is the Pennsylvania Railroad. Photographs document the wide-range of Loewy's work for the company, which included locomotives, passenger car interiors, and stations. A number of photographs depict Loewy's work for several passenger ship lines before and after World War II. There are also photographs showing the interiors of several of the Loewy firm's offices in New York, Chicago, and Paris. In some instances, the photographs are the only documentation remaining for various projects because the early office correspondence and client/project files were destroyed in the 1950s.

Audio tapes series contain interviews with Loewy conducted for radio and television programs, and also includes Loewy's speech to the American Society of Automotive Engineers (1964) in which he discussed the Avanti project.

These materials were separate photograph files maintained by Loewy and his office staff. Titles with quotation marks are the original file titles that were assigned by Loewy or the Loewy office.