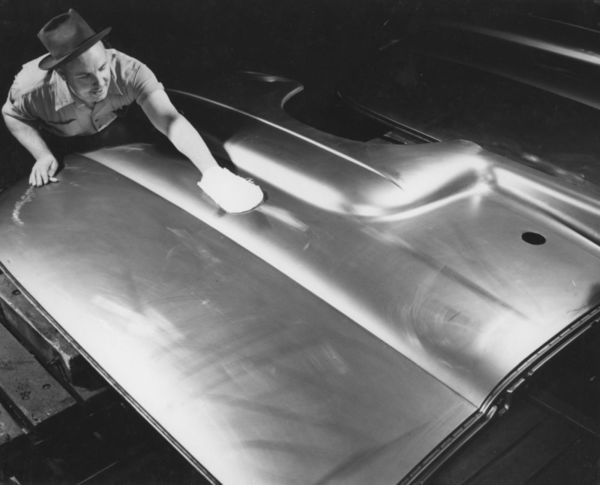 The Budd Company was a manufacturer of steel automobiles, passenger rail cars, and other transportation products. This collection’s photographs focuses on the Budd Company rail division with some images of automobiles and wheel products and manufacturing. The bulk of the materials date from the 1940s, 1950s and the 1980s. The collection is organized into five series: Company executives and employees; Plants and manufacturing; Products; Advertising; and Films and videos.

The Budd Company was a manufacturer of steel automobiles, passenger rail cars, and other transportation products. The company began in 1912, in Philadelphia as the Edward G. Budd Manufacturing Company specializing in the manufacturing of all-steel body automobiles. Motor vehicle design and manufacturing pioneer, Edward Gowen Budd (1870-1946) meet engineer, Joseph Ledwinka (1869-1949) while working at the Hale & Kilbum Manufacturing Company. In 1912, Budd and Ledwinka left Hale & Kilbum Manufacting Company to establish their own company. Hupp, Packard, Garford Motors, and Oakland Motors were early customers of the Budd Company. The company's first large order came in 1914 from the Dodge Brothers, and production increased steadily into the 1920s.

In 1916 the Budd Wheel Company was begun. It made wire wheels and soon also manufactured steel disc wheels as developed by the French company Michelin. Ford, Buick, and Studebaker bought steel bodies from the Budd Manufacturing Company at this time.

In 1923 Budd manufactured the first all-steel enclosed car body. The company purchased a plant in Detroit in 1925, and began to move into the European market. During the Great Depression Budd was forced to develop new products and search for other markets. In 1931 Budd built the first stainless steel airplane, and in 1934 began to manufacture streamlined stainless steel passenger railroad cars. Budd's railroad cars for the Burlington Railroad's Zephyr trains were very influential in future train design. Budd also began the manufacture of disc brakes for railroad cars.

The Edward G. Budd Manufacturing Company and its subsidiary Budd Wheel Company merged to form the Budd Company on June 11, 1946. The railroad car business continued, and in the 1960s Budd manufactured the first Metroliner cars. Eventually, however, the business dwindled and Budd closed its railroad division.

In 1972, when Budd moved its headquarters to Troy, Michigan, ninety percent of the company's business was automobile parts. The company also moved into making plastic auto parts, as the manufacturers reduced vehicle weight for greater efficiency.

In April 1978, Budd became a subsidiary of the German steelmaker Thyssen AG. Thyssen restructured the auto-parts side of the business and sold the poorly-performing railcar business to Bombardier, Inc. of Canada in 1987. The Red Lion site was redeveloped in the 1990s, and Budd ended its long presence in Philadelphia by closing the Hunting Park Avenue plant in 2002. In 1998 Thyssen merged with Krupp, and Budd became a division of ThyssenKrupp Budd. In 2006 the Budd Company was sold to Martinrea International. In 2014, the Budd Company filed for bankruptcy.

This collection’s photographs focuses on the Budd Company rail division with some images of automobiles and wheel products and manufacturing. The bulk of the materials date from the 1940s, 1950s and the 1980s. There are exterior and interior views of plants showing both railroad car and automobile parts manufacturing. Many of the photographs are by well-known commercial photographers Robert Yarnall Richie, William M. Rittase, and Richard T. Dooner. The collection is organized into five series: Company executives and employees; Plants and manufacturing; Products; Advertising; and Films and videos.

Company executives and employees series consists of portraits of company presidents and executives, as well as employees, notably women employees during World War II. There are images of numerous war time events such as blood drives, war bond rallies, and award ceremonies. The photographs date from the 1930s through the 1990s, with one image from 1916. The materials are arranged in chronological order.

Plants and manufacturing series includes photographs of several Budd Company plants exterior views of buildings and surrounding areas, as well as, interior views that show manufacturing processes. Often the interior images include workers. Automotive and rail car manufacturing is primarily what is documented and the plants are not always identified. These photographs date from 1934 to 1980 and are arranged in chronological order.

Airplanes subseries only consists of a few images and is arranged by date. There are photographs that show various plane parts such as a fin, rudder, wing, frame, stabilizer, and a pilot seat. There is also a few images of the Conestaga RB-1, a Navy Cargo plane and a “plane mate” which is a mobile lounge. These images date from 1934 to the 1950s.

The Automobiles subseries consists of photographs of cars, vans, trucks, frames, and trailers. Most images show the final product, others show products in various stages of development, and a few images are of models. These photographs date from 1931 to 1987 and there is one 1974 automobile products catalog. The materials are arranged alphabetically.

The Railcars subseries shows interiors and exteriors of various types of railcars such as lounge, coach, observation, sleeper, diner, washroms, dome, and post office cars. Interior views often picture passengers and railroad staff. Images include famous railroad cars built by Budd such as the Zephyr, Super Chief, Rocket, and Meteor trains, among others. The images are organized alphabetically by railroad company and date from 1934 to 1984.

Space subseries contains a few images related a Lunar orbiter and S-6 satellite produced by Budd in the 1960s.

The Wheels subseries consists of two war time albums, one from 1918, and one from the 1940s. The World War I album includes images of wheel manufacturing, as well as final products. There are images that include employees. The World War II era album is titled “U.S. Government Vehicles using Budd Wheel Equipment” and in addition to the photographs there were numerous newspaper clippings laid in to the album. There are a few negatives and transparencies that date from the 1950s that show a woman posing with large tires.

Films and videos series consists of twelve titles primarily from after the Budd Company was acquired by Thyssen in 1978.These films highlight various aspects of the Budd Company’s production and manufacture of steel automobiles and railcars. The materials are listed in chronological order.