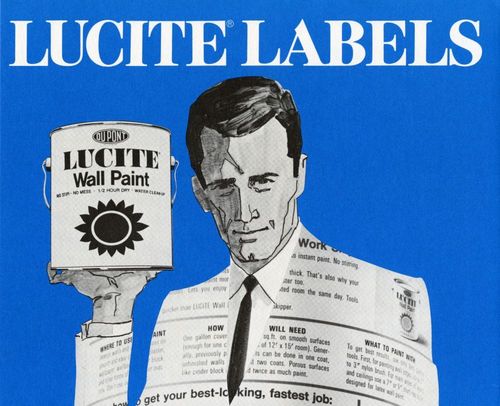 Charles H. DeMirjian (1925-) was a packaging design manager with E.I. du Pont de Nemours & Company. He collected pictures, advertisements, and publications showing DuPont consumer products, as well as some of the products and packages themselves. The collection consists of brochures, advertisements, photographs, and ephemera showing DuPont Company consumer products from 1913 to 1984.

Charles H. DeMirjian (1925-) was a packaging design manager with E.I. du Pont de Nemours & Company. He attended a fine arts school in Philadelphia that is now part of the University of the Arts, followed by studies at the Charles Morris Price School of Advertising and Journalism that was housed in the Poor Richard Club. He was employed, from approximately 1951 to 1954, as Sales Promotion Manager of the Sun Ray Drug Company, then the largest drug store chain in Philadelphia.

Seeking a job with greater design responsibility, DeMirjian joined the Fabrics & Finishes Department of E.I. du Pont de Nemours & Company in July 1954, at a time when DuPont was placing greater emphasis on marketing to the consumer. In that role, DeMirjian worked primarily with the marketing of Duco® and Lucite® paint products. A new Consumer Products Division was formed within the department in 1963, and DeMirjian became Manager of Packaging Design. He was primarily a manager of designers, helping to establish design parameters and making the final selections from work submitted by subordinates and subcontractors. DeMirjian supervised an integrated approach that combined marketing research, advertising and package design.

DeMirjian began working with the Corian® line in the early 1980s and helped turn what had been a profit losing business into a profit making one through the enlistment of proper advertising and merchandising. Launched in 1967, Corian is widely used non-porous solid surface material that is stain resistant, repairable and even recyclable. It is largely used in bathroom and kitchen applications as countertops. Offered in a wide variety of colors, Corian can also be formed into any shape, making it a popular medium for use by designers.

DeMirjian collected pictures, advertisements, and publications showing DuPont consumer products, as well as some of the products and packages themselves. He retired from the DuPont Company in June 1991.

The collection consists of brochures, advertisements, photographs, and ephemera showing DuPont Company consumer products from 1913 to 1984. Chief among these products are paint and car care products such as car wash, polish, and antifreeze. Much of the material was aimed at dealers, showing how packaging could efficiently promote the products. There are a few company memorandums and copies of published articles about packaging, as well as some awards that the DuPont Company received for its advertising and packaging.

A deck of cards has images of DuPont Company products on the face of the cards. An album from 1913 contains Harrison Brothers Company paint can labels, brochures, color samples, advertising, and photographs of interiors of paint stores. The DuPont Company acquired Harrison Brothers. There is a complete set of Weatherly Indexes for DuPont car care products from 1970 to 1982. These illustrate the containers for each of these products. There are over 400 slides of DuPont consumer products and advertising assembled by DeMirjian. Finally, there is a VHS videocassette (copy tape) of DuPont car care product television commercials from 1970 to 1981.