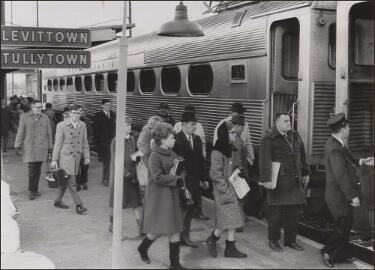 The Philadelphia Suburban Transportation Company operated bus and trolley lines, many of which originated in Upper Darby Township on the western border of Philadelphia and served Chester, Delaware, and Montgomery counties. Suburban Station and the Fidelity-Philadelphia Trust Company building are both located in Center City. The Red Arrow transportation lines are found in Philadelphia's western suburbs. This small collection consists of photographs of Suburban Station, railroad and trolley tracks, and bus shelters.

Suburban Station was an underground, stub-end terminal for the commuter train lines of the Pennsylvania Railroad that served Center City Philadelphia. The station opened on September 28, 1930. Above ground was the Suburban Station office building designed in the Art Deco style by Graham, Anderson, Probst & White. It opened in 1929 and served as the Pennsylvania Railroad's executive offices.

Erected on South Broad Street for the Fidelity-Philadelphia Trust Company in 1928, the Beaux-Art style skyscraper was designed by the architectural firm of Simon & Simon. The 29-story building is currently known as the Wells Fargo building and is listed on the National Register of Historic Places.

Laclede Steel Company was founded in 1911 as a scrap steel manufacturer headquartered in St. Louis, Missouri. The company experienced modest growth in the years leading up to World War II and enjoyed rapid growth during and following the war. However, in the 1990s the company suffered from a failing steel industry and closed as a bankrupt concern in 2001.

This small collection consists of photographs of Suburban Station, railroad and trolley tracks, and bus shelters.

There is an undated rental brochure for the Fidelity-Philadelphia Trust Building on South Broad Street which includes a floor plan of the 15th floor; a retouched black and white image of downtown St. Louis, Missouri, indicating in color those buildings reinforced with rail steel bars manufactured by Laclede Steel Company.

There are eight photos taken at the groundbreaking ceremony for the Suburban Station on July 28, 1927, taken by William N. Jennings, noted Philadelphia photographer. His work also includes a photograph of a table top model of Suburban Station, 1929, and Pennsylvania Railroad trackage showing improvements to the "new MU Penn coach yard and Main Line Tracks looking north from Market Street" (1931). The West Philadelphia Station is visible. There are three photographs of control panels and electrical equipment in Suburban Station taken by Earl C. Roper.

There is one negative showing the subway-surface line course under City Hall, 1960s; a SEPACT notice posted on an utility pole; a window display for "Silverliner" cars; people boarding a Red Arrow bus and the "Silverliner" at Paoli and Levittown stations, circa 1965; new Market-Frankford line cars, 1960s; "Don't drive yourself crazy" float in parade for Vice President Hubert Humphrey, 1965.