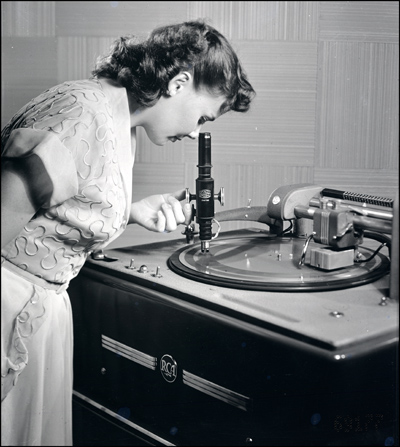 For over fifty years the Radio Corporation of America (RCA) was one of the country's leading manufacturers and vendors of radios, phonographs, televisions, and a wide array of consumer and military electronics products. The Radio Corporation of America (RCA) and the Victor Talking Machine Company merged in 1929 becoming the RCA Victor Company in 1930. This merger allowed RCA to consolidate the research, engineering, manufacturing and sales of RCA products. This collection consists of negatives, a majority of which feature sound and television equipment manufactured by RCA. These images include phonographs, radios, radio-phonograph combinations, records, speakers, amplifiers, microphones, facsimile machines, televisions, equipment involved in the transmission and reception of television and radio waves, radio equipment created for use by government agencies and motion picture equipment.

For over fifty years, the Radio Corporation of America was one of the country’s leading manufacturers and vendors of radios, phonographs, televisions, and a wide array of consumer and military electronics products. The company was incorporated in Delaware on October 17, 1919, and changed its name to RCA Corporation on May 9, 1969. Through subsidiaries, it operated the country’s first radiotelegraph, radiotelephone and radio facsimile systems, as well as its pioneer radio and television networks. The company will always be identified with David Sarnoff (1891-1971), who began working for a predecessor company as an office boy in 1906, became vice president in 1922, president in 1930, and served as chairman from 1947 to 1970. Sarnoff was one of the first to grasp the full potential of radio and television and imparted to the company its reputation for research and innovation.

This collection has been arranged into twenty-two series. The series groupings were imposed by the archivist. The subseries are based on the subjects assigned by RCA staff in the card index.

Within each subseries the negatives are organized by negative number, which roughly corresponds to chronological dates. Negative numbers have been preserved and appear as “ID#” in the finding aid.

The collection consists of negatives relating to the RCA Victor Company which was formed in 1929 when the Radio Corporation of America acquired the Victor Talking Machine Company. The majority of the negatives feature sound and television equipment manufactured by RCA. These images include phonographs, radios, radio-phonograph combinations, records, speakers, amplifiers, microphones, facsimile machines, televisions, equipment involved in the transmission and reception of television and radio, radio equipment created for use by government agencies and motion picture equipment. Many images show the interiors of RCA equipment, or feature individual radio and television components, such as radio and television tubes. A number of images feature machinery and employees engaged in manufacturing RCA equipment, particularly television components. RCA recording artists and actors/actresses appear in another significant segment of the images, both in candid and posed images taken in recording studios and in promotional photographs from films. Images used in RCA advertising also appear in the collection.

The Audio series contains images related to non-broadcast sound equipment. The series is organized into eleven subseries: Commercial sound equipment, Equipment, Intercom, Loud speakers, Manufacturing sets & records, Meters, Microphones, Phonographs & transcriptions, Record changers, Sound trucks, and Speakers. The series materials date from 1930 to 1977. The Meters subseries are primarily images of audio meters like decibel and acoustic gauges measurements, but it’s possible other types of meters are in this subseries related to broadcasting. Additionally meters appear in other series such as the Radio/TV broadcasting series.

The Beverage inspection machine series includes images of an apparatus used for detecting the presence of foreign particles or dirt in or on transparent bottles. This machine was used in quality control in plants for milk and other bottled beverages. Images in this series are mainly of the machine itself, but also include parts, factory and warehouse interiors of bottling facilities for Coca-Cola and other unidentified companies. The materials in this series date from 1945 to 1960.

The Computer series are images of equipment, components, and parts. The series is arranged into five subseries: Bizmac, Card punch/punch tape, Card readers, Equipment, Spectra-70. There are some overlap in the Equipment subseries. The materials date from 1944 to 1977. Related materials can be found in the Government projects series.

The Heating and cooling series contains images of temperature control equipment related to either refrigeration or thermal heating. The series is arranged into two subseries: Cooling and Thermal and dates from 1937 to 1977.

The Motion pictures series are images of film equipment such as projectors, cameras, processors, camera controls, as well as equipment related to the Photophone. The series is divided into two subseries: Equipment and Photophone and dates from 1930 to 1976.

The Packing, parts, and styling series consists of images of packaging, parts/components of products, and artistic renderings of products. The series is divided into three subseries: Packing, Parts, and Styling. Styling was a department within the RCA company. The materials date from circa 1930 to 1976.

The Power series contains images related to the product of voltage and currents. The series has been organized into five subseries by type: Generators, Power supply, Rectifiers, Transformers and Voltage. The materials date from circa 1930 to 1977.

The Publicity series contains images related to advertising, press, and promotions. There are headshots of musicians, celebrities, and personnel, product images, organizational and financial charts, and company images. The series is organized into ten subseries: Advertising; Artwork; Celebrities; Charts; Copy work; Exports; Logos; Personnel, Publicity & Promotional Shots; Select a Lesson; and Television publicity. The materials date from circa 1930 to 1977.

The Radio series are images of equipment, components, parts, and details. The series is divided into six subseries: Amateur Rect. Trans.; Auto; Crystals; Police radios; Radio - Phonographs; and Radios. The materials date from 1930 to 1976. The materials in the Crystals subseries may also relate to television, optics or lasers as well as radio equipment.

The RCA buildings/facilities series show exterior and interiors of RCA warehouses, factories, plants, and offices. Some images include workers, work areas, equipment, machinery, and/or products. The series has been organized into five subseries: Area shots, Buildings, Identified plants/laboratories, Plant change over, and Unidentified factories/laboratories. The materials date from circa 1930 to 1977.

The Recorders, projectors, and cameras series are images of equipment, components, parts, and details. The series is arranged into six subseries: 16mm, Cameras, Projectors, Recorders, Tape recorders, and TV cameras. There is some overlap between the subseries. The materials date from circa 1930 to 1977.

The Scientific equipment series are images of equipment, components, parts, and details. The series is arranged into six subseries: Electron Microscope, Lasers, Medical electronics, Metal detectors, Optics, and Radar. The materials date from 1933 to 1977. Additional materials related to optics can be found in the Television series. Additional materials related to Radar can be found in the Government projects series.

The Telecommunications series contains images of equipment, components, parts, and details. The series is arranged into six subseries: Equipment, Facsimile equipment, Mobile, Speech, Telephones, and TELEX. The materials date from 1930 to 1977.

The Television series consists of images of television equipment, components, parts, and details. The series is organized into five subseries: Color Television, Industrial TV equipment, Test charts, Theater Television, TV sets 1930s-1960, and USSR. The materials date from 1930 to 1976. There are some related materials in the Radio/TV broadcasting and the Recorders, projectors, and cameras series.

The Tests/experiments series is divided into three subseries: Equipment, Experiments, and Test equipment T.M.V. The images in these subseries are of equipment details, parts, test setups, experimental machinery, results from experiments, charts, and other test equipment. These materials date from the 1930s to 1977.

Negatives and films are stored offsite in cold storage and must acclimate to room temperature prior to viewing (Boxes 1-298 and Film Cans 1-28). Please contact the Audiovisual Collections and Digital Initiatives Department at least 48 hours in advance of research visit.

A collection of laboratory, advertising and company publication, including Voice of the Victor, may be found at the Camden County Historical Society, Park Blvd. & Euclid Ave., Camden, New Jersey 08103.

RCA's former collection of historic instruments and other RCA-Victor memorabilia is now located at the Johnson Victrola Museum in Dover, Delaware.

A portion of the negatives have badly degraded over time and may require conservation prior to research use. These negatives have been separated from the rest of the collection and appear in the finding aid inventory with a note that says: “REQUIRES CONSERVATION.” Please contact the archivist to inquire about these negatives in advance of your research visit.

Company historian Frederick O. Barnum III salvaged this collection from the abandoned photo lab on the 4th floor of Building 10 of the RCA Camden Plant, after the plant had been vacated and abandoned by successor company Martin Marietta Corporation in April 1993.

Books, trade journals and company publications were transferred to the Published Collections Department.

The negatives included a note from RCA’s Data Management-Photographic department stating: “Damaged negatives have been removed and destroyed. If requested and not in file, report as “destroyed -- unusable.” This note is dated 1980.

A card index was created by staff at RCA which identifies each image and often includes the following information: negative number, image description, subject, department, building, floor, associated names, and remarks. Not every index card includes all of the information listed above and not every negative is accounted for in the card index. The card index is handwritten and was transcribed by volunteers: Marlene Knowles, Susan Cherrin, and Kathleen O’Hara under the supervision of Audiovisual Reference Archivist, Lynsey Sczechowicz.

The negatives were identified using the index and rehoused according to archival best practices by interns Becky Koch and Melanie Grear.

The Historical note was written by Christopher Baer with a revision by AVD Staff.

The finding aid was completed by Laurie Sather, Angela Schad, and Kevin Martin.