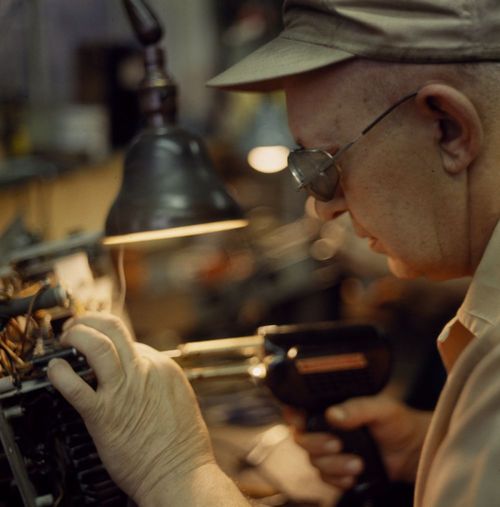 The Consolidated Rail Corporation (Conrail) was incorporated in October 1974. It was formed under the auspices of the United States Railway Association, a quasi-public agency established for the purpose of solving the problems of bankrupt railroads in the Northeast and Midwest. The Conrail photograph collection consists of a large number of images from its company files, but the majority of the material comes from its predecessor companies: Pennsylvania Railroad and Penn Central Transportation Company. These items are predominanatly composed of photographs, negatives, transparencies, lantern slides, and films.

The Consolidated Rail Corporation (Conrail) was incorporated under the laws of Pennsylvania on Oct. 25, 1974. It was formed under the auspices of the United States Railway Association, a quasi-public agency established for the purpose of solving the problems of bankrupt railroads in the Northeast and Midwest. The USRA conducted elaborate studies to determine which portions of the rail network could be made self-supporting. Additional so-called light-density mileage was also preserved under political pressure from shippers and communities. Those portions of the assets of six major bankrupt railroads (the Penn Central Transportation Company (itself a merger of the Pennsylvania, New York Central, and New York, New Haven & Hartford Railroads), the Erie Lackawanna Railway Co., the Reading Co., the Lehigh Valley Railroad Co., the Central Railroad Co. of New Jersey, and the Lehigh & Hudson River Railway Co.) were transferred to Conrail at condemnation value on April 1, 1976.

The resulting Conrail system, covering about 20,000 route-miles, received over $ 2 billion in government advances for capital improvements. Most of Conrail's lines, as well as its Philadelphia headquarters, were inherited from Penn Central. Despite the infusion of government money, Conrail inherited many of the structural problems of the old bankrupt railroads and remained unprofitable until the Staggers Act of 1983 deregulated railroad rates. The Reagan Administration then began a campaign to return Conrail to the private sector by means of a sale to the Norfolk Southern Corp., only to back down after over two years of political pressure and counteroffers. Conrail's stock instead was sold at what was then a record IPO on March 25, 1987, for a total of $1.6 billion. On July 1, 1993, a new holding company, Conrail, Inc., was incorporated, and Consolidate Rail Corporation became an operating subsidiary. During the mid-1990s boom, pressure for rail mergers intensified, and on October 15, 1996, Conrail, Inc. announced plans to merge into CSX Corporation, which would have left only two major rail systems east of the Mississippi. The other system, Norfolk Southern, would have been dwarfed by the combined CSX-Conrail, and a bidding war ensued that drove the price of Conrail to absurd heights. On March 7, 1997, CSX and Norfolk Southern signed an agreement to divide Conrail between them for a total purchase price of $10.3 billion. Consolidated Rail Corporation remains as a joint subsidiary and the owner of certain terminal trackage that has to be shared by Norfolk Southern and CSX.

On Deposit from ConRail.

Fifty-four of the 120mm color transparencies (photographer unknown) were rehoused in plastic mounts in July 2005. At the same time, two sets of archival DVDs were burned. On one set the images were saved at (on average) 150 megabytes per image; on the other the images were saved at over 1000 megabytes per image. The subject matter includes views from 30th St. Station (concourse and power house interiors); Madison Square Garden under construction; views of PRR employees at a number of jobs (dispatcher, engineer, welder, foreman, secretary et al) and locations, including Altoona and Hollidaysburg shops, Greenville barge transfer in Brooklyn; and lastly, creative photography of objects commonly found in the plants and offices of the railroad.