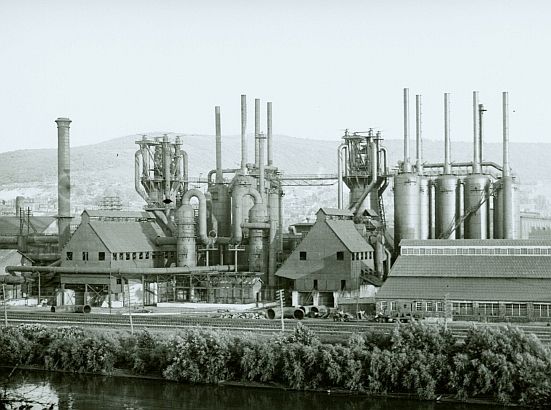 The American Iron and Steel Institute is a trade association of North American steel producers. The group’s mission includes advocating for public policy, education and innovation for the Iron and Steel Industry. The Institute was established under the leadership of Elbert H. Gary (1846-1927) in 1908, after the Panic of 1907 brought an end to industry-wide consolidations. This collection consists of photographs, research notes, audio, film, and video which document the history of the steel industry. The images cover the entire scope of the steel industry from basic raw materials through the multiple aspects of steelmaking. In addition to images documenting the technical aspects of steel production, there are photographs showing steel in use. These include a variety of industrial and consumer applications and images related to the steel industry and environmental issues. The Albert T. Keller (1869-1940) photographs depict the sites or remains of early ironworks primarily in the mid-Atlantic states and New England states during the 1930s and there are over fifty blast furnace complexes pictured. The Walter C. Woodman (1903-1979) photographs and research notes document the history of iron furnaces and Saugus Iron Works becoming a national historic landmark.

The American Iron and Steel Institute is a trade association of North American steel producers. The group’s mission includes advocating for public policy, education and innovation for the Iron and Steel Industry. The Institute was established under the leadership of Elbert H. Gary (1846-1927) in 1908, after the Panic of 1907 brought an end to industry-wide consolidations. One of the oldest trade associations in the United States, the organization’s first meeting was held in 1910.

During World War I, the Institute under Judge Gary was the primary coordinator with the government for all industry production, allocation and prices. However, the Institute's staff remained small, and it had no paid president until 1932. The passage of the National Industrial Recovery Act (NIRA) in the early days of the New Deal transformed the Institute as it did most trade associations. The NIRA worked to arrest the collapse of production and prices by imposing a system of industry-specific “Codes of Fair Competition,” in effect forming each industry into a government-sponsored cartel in return for provisions to maximize employment. Working with the Wall Street law firm of Cravath, deGersdorf, Swaine & Wood, the Institute played the leading role in drawing up and administering the NIRA Code for the steel industry. Walter S. Tower (1881-1969) was named executive secretary in September 1933 and assumed active management of the Institute through May 1952. After the NIRA was ruled unconstitutional, the Institute mobilized to press the industry's case during the conflicts with government and labor during the later New Deal, beginning much more aggressive public relations work. The Institute began active technical research in the late 1930s with the appointment of a General Technical Committee. Much of this work focused on standardization. The first of a series of “Steel Product Manuals” appeared in 1937, and a Committee on Building Codes was set up in 1938.

In the 1940s, the Institute began programs of cooperative research through its Committee on General Research. It also provided its members with up-to-date information on industrial relations, antitrust, health and safety. The Committee on Public Relations disseminated information about the industry through pamphlets, press releases and films, as well as its publications, Steel Facts (1934+) and Steelways (1945+).

By 1954, the Institute had 2,500 individual and ninety-eight corporate members. In recent years, the Institute has focused on trade and environmental issues. The restructuring of the industry after 1970 has somewhat diluted the Institute's impact, with separate organizations now representing minimills and other specialties. Still, the American Iron and Steel Institute remains the major industry trade association.

Albert T. Keller (1869-1940) was the chief engineer for construction at the Bethlehem Steel Company in Bethlehem, Pennsylvania. From 1931 to 1937, Keller's hobby was to take weekend and vacation trips, documenting and photographing the ruins of early American iron furnaces in Pennsylvania and the Eastern United States. He was sometimes accompanied by his wife, Martha Smith Keller (1871-1938), whose grandfather was an ironmaster in Chester County, Pennsylvania, at Rokeby Rolling Mill. In many cases there were not even ruins left when Keller attempted to locate the remains; some of the photographs only indicate where the buildings originally existed. In addition, Keller used his contacts throughout the iron and steel industry to gather original photographs and clippings of nineteenth and twentieth century blast furnaces from around the country and a few abroad. Eventually, his collection was purchased in June, 1948, by the American Iron and Steel Institute and became a part of their library holdings. The library added a few more items--some from Clement Starr Brinton (1875-1963), another documenter of early iron blast furnaces to the Keller collection.

Walter C. Woodman (1903-1979) was a consulting mechanical engineer who lived in Watertown, Massachusetts. He was very interested in the iron industry of New England and was instrumental in working with American Iron and Steel Institute to restore the Saugus Iron Works and having it designated a national historic mechanical engineering landmark in 1975.

The Public Relations department photographs series was mostly compiled from companies who were members of the organization. The series has been divided into six subseries: Steel making and processes; Air and water pollution; Historical photographs; People, places and publicity; Color file; and the T.F. Healy collection of old illustrations.

In addition to images documenting the technical aspects of steel production, there are photographs showing steel in use. These include a variety of industrial and consumer (bicycles, furniture, and appliances) applications, and even artwork. Some of these photographs depict the use of steel in other industries such as automobile manufacturing, construction and architecture (including buildings, bridges and subways), oil drilling, and shipbuilding.

The Historical photographs subseries is made up of images showing different aspects of the iron and steel industry in the nineteenth and early twentieth centuries. These images include furnaces, mills, coke ovens, transporters, steel works, and warehouses. There are also some photographs of steel workers and men related to the steel industry, including Sir Bessemer and Andrew Carnegie.

The People, places and publicity subseries includes illustrations from the publication Steel a Picture Story, flowcharts the steel making process, a presentation on iron and steel, ephemera, images of steel workers, firefighters and steelmaking. There is one photograph of John P. Roche, the President of the AISI with Walt Disney. There are also photos of people involved in war board committees and conferences. There are also a few engravings, postcards, and advertisements for various steel works.

The Color file subseries contains images of furnaces, ingots, steel, mills, steel workers, and facilities. These materials are grouped together by the unifying factor of being color photographs.

The T.F. Healy collection of old illustrations subseries contains original clippings in regards to ordnance manufacture (from the Illustrated London News, 1851) and a Republic Iron and Steel Co. advertisement (Harper's Weekly, 1912). Also included with the Healy material are reproductions of 35 Harper's Weekly Civil War newspapers (May 4, 1861 to January 4, 1862) which were produced as centennial souvenirs of the Civil War in 1961. Subjects found in this grouping include: Askam Ironworks, Bowesfield Iron, Landore Siemens Steel Co. and Rodman guns among many others. Thomas F. Healy agency of New York, was a pictorial research service. It is possible that in the early 1960s, the AISI hired the agency to clip and gather steel-related illustrations from ninteenth and some twentieth century British and American journals.

The Albert T. Keller photographs series consists of over 2,000 images taken by Albert T. Keller, an avocational historian of the iron industry, who was the Chief Engineer of Construction for the Bethlehem Steel Company in Bethlehem, Pennsylvania. These photographs depict the sites or remains of early ironworks in the mid-Atlantic states and New England states, as well as Alabama, Colorado, Connecticut, Illinois, Indiana, Kentucky, Maine, Maryland, Massachusetts, Michigan, Minnesota, Missouri, New Hamphire, New Jersey, Ohio, Pennsylvania, Tennessee, Virginia, West Virginia, Wisconsin and a few foreign sites. The foreign countries represented are Canada, England and Wales. Keller photographed these places in the 1930s. Also included in this series are over fifty blast furnace complexes. Many of these were extant by the 1930s when the photographs were made and collected, but some are of active company sites. There is a particularly nice collection of Bethlehem Steel Company items showing the Sparrows Point plant. This series is arranged alphabetically.

Keller sometimes made notes on scraps of paper and recycled envelopes listing book citations used to research the dates of the furnaces. These tracings have been copied on to new envelopes when the collection was rehoused or maintained in their original format. The Hagley Library has some of the volumes that Keller referred to. One often cited is geologist Peter Lesley's 1859 work, The Iron Manufacturer's Guide to the Furnaces, Forges and Rolling Mills of the United States [Published Collections TN403 A5 L6]. Keller also cited Documents Relating to the Manufacture of Iron in Pennsylvania: Published on behalf of the Convention of Ironmasters, which met in Philadelphia, on the twentieth of December, 1849 [Published Collections TS300 I7 1849] and another eighteenth century book, A Concise History of the Iron Manufacture of the American Colonies up to the Revolution, and of Pennsylvania until the present time by John Pearse [Published Collections TN704U5 P3].

The Walter C. Woodman photographs and research notes series contains materials about iron furnaces. The series has been divided into two subseries: Iron furnaces and Saugus Iron Works. The Iron furnaces subseries consists of two volumes of notebooks compiled by Woodman which contain newspaper clippings, correspondence, field notes, programs and maps about the early iron industry and furnaces in Connecticut, Maine, Massachusetts, New Jersey, New York, and Virginia. There are three photograph albums containing Woodman's photographs of furnaces which correspond to his research notes. There is one report from the American Society of Mechanical Engineers which chronicles the organization's history and the history of iron Forges, furnaces and rolling Mills in New England. The publication was edited and partially written by Woodman. The work was published posthumously and is dedicated to Woodman.

The Saugus Iron Works subseries is made up of correspondence, articles, and booklets which document the nomination of the Saugus Iron Works site as a National Historic Mechanical Engineering Landmark, it's acceptance, and planning for the dedication. All of which Woodman played an instrumental role in.

The Audio series consists of recordings of plant noise from several different steel companies, obtained for a noise study. Also included are sound cassettes and filmstrips for two presentations created by the American Iron and Steel Institute and three sound cassette presentations that do not include their accompanying filmstrips.

The Film series contains nineteen 16mm films of informational material about the Iron and Steel Industry. Several are presented by the American Iron and Steel Institute. They boast the usefulness of steel in construction and show the processes of how it is made and used in various engineering projects.

There is one Betacam videotape in this collection entitled “VRAs: Issues and Answers."