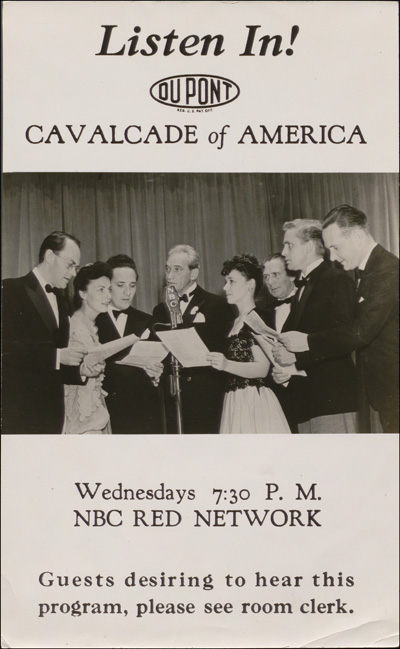 The Cavalcade of America was an anthology drama radio program which aired weekly from 1935 to 1953. The radio show was sponsored by the DuPont Company, a chemical company, which began as a manufacturer of gunpowder in 1802. The DuPont Company created the Cavalcade of America as a promotional tool. The program dramatized historical events focusing on individual stories of heroism, and occasionally presented a musical performance. The stories were presented as uplifting and emphasized human achievements, progress and technological innovations.

The show had eighteen series producing 781 episodes. Although not actual advertising for DuPont products, the company motto was read at the beginning of each episode, “Maker of better things for better living through chemistry”. The narrators included countless famous performers such as Bette Davis, Lionel Barrymore, Clark Gable, Humphrey Bogart, James Stewart, Helen Hayes, Orsen Welles, and Lana Turner.

The collection consists of photographs relating to the Cavalcade of America radio show. The majority are views of rehearsals or live performances; actors and actresses, including numerous Hollywood celebrities such as Ginger Rogers, Lucille Ball, and Cary Grant; the DuPont Chorus; live audiences; and the production staff. There are also photographs of program scripts and of the RCA Building in New York City. Other photographs are of DuPont Company exhibits advertising the show; of awards being presented to the DuPont Company and/or employees for safety at live performances; and of tours of DuPont plants being given to actors and actresses.