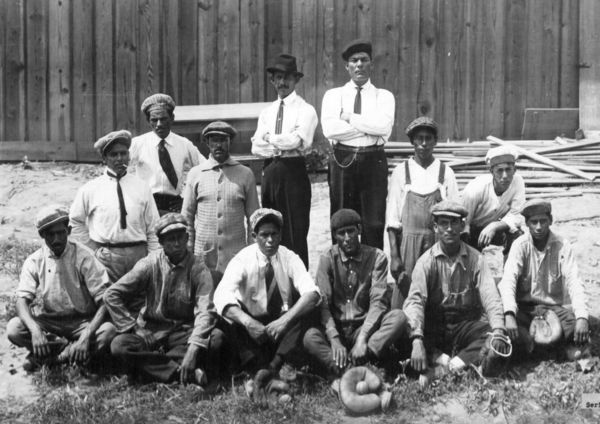 E.I. du Pont de Nemours & Company is a chemical company, which began as a manufacturer of gunpowder in 1802. The collection consists of photographs and prints that document the early history of the DuPont Company’s involvement in the gunpowder and explosives industries from the 1860s through the 1920s. The bulk of the collection are photographs of employees, executives, and plant views, including aftermaths of explosions and construction. This collection also includes a variety of advertisements for the DuPont Company as well as other non-DuPont related trades. A large portion of this collection are oversize materials (panoramic photographs and advertising posters).

E.I. du Pont de Nemours & Company is a chemical company, commonly referred to as the DuPont Company which was established in 1802 by French immigrants Pierre Samuel du Pont de Nemours (1739-1817) and his son Eleuthère Irénée “E.I.” du Pont (1771-1834). The company began as a manufacturer of gunpowder. The du Pont’s purchased a mill on the banks of the Brandywine River just north of Wilmington, Delaware and named the site Eleutherian Mills. In 1813, du Pont purchased neighboring land which had been called Hagley. He retained the name and the area became known as Hagley Yards. In 1837, E.I. du Pont’s son Alfred V. du Pont (1798-1856) became President of the company. By 1850 Alfred du Pont resigned and his younger brother Henry du Pont (1812-1889) succeeded him as President.

After the Civil War, the DuPont company had two major competitors, the Hazard Powder Company, and Laflin & Rand Powder Company. DuPont took over the Hazard Powder Company in 1876. Laflin & Rand and the DuPont Company partnered in a joint venture which was spearheaded by Lammot du Pont, who in 1880 incorporated the Repauno Chemical Company to manufacture dynamite. His cousin William du Pont (1855-1928), Henry du Pont’s son, was appointed to help Lammot du Pont with the company. After Lammot du Pont's death in an explosion on March 29, 1884, William du Pont became president until resigning in 1892.

In 1890, at the request of the U.S. government, the E.I. du Pont de Nemours & Company started scientific research on smokeless powder. The DuPont Company began the manufacture of smokeless powder at its new works at Carney's Point, New Jersey, in 1891 to 1893.

Inventor and chemist Hudson Maxim (1853-1927), sold many of his explosives and smokeless gunpowder patents to DuPont in 1897. DuPont established a laboratory for him where he continued to produce inventions relating to explosives, ordnance, and torpedoes through the 1910s.

In 1889 Eugene du Pont (1873-1954) took over from Henry du Pont as President of the company until his death in 1902. After Eugene du Pont’s death the DuPont Company was in danger of folding and being bought out by its competitor, Laflin & Rand, when three cousins; T. Coleman du Pont (1863-1930), Pierre S. du Pont (1870-1954) and Alfred I. du Pont (1864-1935) purchased the company. T. Coleman du Pont became President and DuPont took control of Laflin & Rand, including the Haskell Works which manufactured Infallible and Ballistite powders.

Hamilton Barksdale (1862-1918), J. Amory Haskell (1861-1923), and Harry G. Haskell (1870-1951) were three key members of DuPont’s Executive Committee. Barksdale became the director of the High Explosives Department, which included research operations at Repauno’s Eastern Laboratory. J.A. Haskell helped found the Eastern Laboratory and hired chemist Dr. Charles L. Reese (1862-1940), who was the first director of the laboratory and a pioneer of explosives research. H.G. Haskell worked at Repauno, was a DuPont vice president, a member of the Executive Committee and served on the company's Board of Directors.

Throughout the early 1900s DuPont expanded considerably. In 1903 DuPont established the Experimental Station, a research facility located across from DuPont's first black powder works. The Parlin, New Jersey site was acquired in 1904 to manufacture paint and photographic products. In 1904, DuPont purchased the Judson Dynamite and Powder Company in California, which operated until August 1905, when there was a dynamite explosion and fire. The plant was dismantled and the property sold. In 1905, Barksdale Explosives Plant in Wisconsin was established to produce dynamite and other explosives for the military during World Wars I and II, and for the mining industry. The Louviers, Colorado plant began production of dynamite in 1908 and provided explosives primarily for mines in the region. Hopewell Works in Virginia was established in 1912 to manufacture dynamite, however, the onset of World War I created a great demand for guncotton. In 1915, Hopewell was converted for that purpose and became the largest guncotton plant in the world. After the war, the plant was sold off for other uses. In 1914, a dye works was constructed at Deepwater Point, New Jersey to enter the market for dyes left vacant by Germany's absence. In 1945 the plant name was changed to the Chambers Works.

With renewed interest in the nitrate industry Pierre S. du Pont and financial executive, John Raskob (1879-1950) traveled to Chile in 1902 and determined that the company should establish an office there to deal directly with suppliers. In 1909, they purchased nitrate mines and began operating their own company.

A government suit was brought against the DuPont Company in 1907 and in 1911, the U.S. Supreme Court ruled that the company had become a “powder trust” and was in violation of the Sherman Act. DuPont dissolved portions of its explosives business and formed two new powder companies; Hercules and Atlas Powder Companies.

As the United States entered World War I, DuPont was enlisted by the government to produce explosives for the Allied forces. Five plants were built to meet the need, the largest was in Old Hickory, Tennessee. The plant produced the raw materials for smokeless powder; sulfuric acid, nitric acid, and guncotton. The site was turned over to the government in 1919 and abandoned by 1923.

Pierre du Pont retired in 1919 and Irenee du Pont (1876-1963) became President of the company. In 1920, the DuPont Fibersilk Company was established with a textile plant in Buffalo, New York. The product was named “rayon” in 1924 and manufacture was expanded. Three plants were built in the south. DuPont purchased the abandoned Old Hickory plant to reconstruct it to manufacture rayon. There was a plant established in Richmond, Virginia and in 1928 the Waynesboro, Virginia plant opened.

By 1926 DuPont officially dissolved the powder production unit, although it had already been inactive for many years. In 1926, Lammot du Pont II (1880-1952) succeeded his brother Irenee du Pont as company president. In the 1930s Lammot du Pont II constructed the first nylon plants in Belle, West Virginia. The company continued to expand its scientific chemical research and innovations.

The collection has been divided into six series: I. Advertisements and promotional materials; II. Plants and employees; III. Wilmington, Delaware; IV. Transportation; V. War and Military; VI. Prints and ephemera.

The materials are arranged in alphabetical order, except for Series V. War and Military which is in chronological order by War depicted.

The collection consists of photographs and prints that document the early history of the DuPont Company’s involvement in the gunpowder and explosives industries from the 1860s through the 1920s. The bulk of the collection are powder advertisements and photographs of employees, executives, and plant views, including aftermaths of explosions and construction.

The “Advertisements and promotional materials” series are predominantly posters, some original artwork, calendars and photographs which date from the 1880s through to the 1950s. In the “DuPont Company” subseries are primarily advertisements for powder which either emphasize the military uses or hunting and rifle trapshooting. The hunting posters often are of game birds or hunting dogs or of men and boys hunting. The Trapshooting posters generally show men and women shooting rifles or highlight contest trophies or winners. There are a few advertisements for other products such as Rayon, Cellophane, and Pyralin.

The “DuPont Company subsidiaries” subseries are mostly poster advertisements, some smaller prints and photographs. Although there are materials from seventeen companies in the subseries, only two companies have multiple items Laflin & Rand and Harrison Brothers & Co.

The “Plants and employees” series contains a large amount of panoramic or oversize photographs and is divided into two subseries. The “DuPont and subsidiaries plant buildings and offices” subseries is the largest part of the collection, with panoramic or aerial views of various DuPont plants, mostly gunpowder or explosive plants, a few rayon and dye works plants are represented as well. Plants included are Hopewell Works, Carney’s Point, Deepwater, Repauno Works, Eastern Laboratory, Experimental Station, Parlin Works, Barksdale Explosives Plant, Hagley Yards, and Louviers, among a few others. The photographs are primarily exterior views either of the plant as a whole or of individual buildings. There are some interior views of equipment and machinery, particularly of interest are the images of Waynesboro Rayon production which were photographed by William Rittase (1894-1968). The DuPont Nitrate Company established in Chile is well documented in fifteen albums of photographs of various trips taken to Chile between 1902 and 1925?. The albums are primarily exterior views of the mines, buildings and the surrounding landscape, and some interior views of the administration office, employees and equipment. There are also loose photographs and corresponding negatives of the DuPont Nitrate Company plant. The photographer and compiler of the albums is unknown, some albums are marked as “Office copy” - images within the albums are identified and most are dated. There are also two albums of the Norwegian Nitrate Company which date from 1906 to 1916. The images show exteriors views of the plant, surrounding area, and dams.

The “DuPont and subsidiaries employees and executives” subseries contains a large amount of oversize photographs and some panoramas or smaller size photographs. There are both individual portraits of executives and key employees, as well as group portraits of various departments, committees and events such as the High Explosives Operating Department, the Tabulating Department, the Executive Committee, Sales Department conventions, dinner meetings and DuPont plant guards. There are some less formal snapshots of the DuPont girls baseball team, a managers meeting and plant safety picnics which are in an album.

The “Wilmington, Delaware” series consists of photographs of city street scenes, building exteriors and two aerial photographs. The images date from the 1890s through the 1930s. There is also a map of New Castle County and an architectural drawing of an hydroelectric power dam.

The “War and Military” series consists of prints of battle scenes from different wars, such as the Battle of Antietam, the battle on Lake Erie and the Civil war submarines the Merrimac and the Monitor. There are also illustrations that depict United States military men in uniform (full dress and informal dress) from different periods.

The “Prints and ephemera” series contains a modern print of a seventeenth century shoemaker made from a German copperplate from that era; a large photograph of the Acropolis and the Temple of Jupiter; an anti-prohibition cartoon ink drawing; a poster of the Liberty Bell and print of a Puritan couple. There is also W. Hawkins, “Graphic Illustrations of Animals” which is a series of beautiful prints each of which shows various scenes involving an animal such as seals and silkworms.