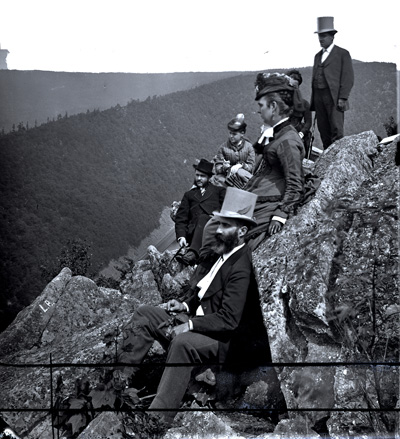 This collection consists of glass plate negatives showing scenes from Carbon County, Pennsylvania during the second half of the nineteenth century, as well as a selection of archival prints. The majority of the images show scenes from Mauch Chunk (now Jim Thorpe) and the surrounding area, the Mauch Chunk Switchback Railway, and the waterfalls at Glen Onoko.

While these images are not labeled or otherwise marked to indicate a photographer, it is assumed that they were all taken by the same person. These images are documented elsewhere in the historical record; exact duplicates of many of these images appear in stereoviews published by James Zellner, a photographer working out of Mauch Chunk, Pennsylvania.

James Zellner was born to Charles and Elizabeth Zellner in Beaver Run, Pennsylvania on June 8, 1836. He was the second of eight children. By 1850, the family was living in Mauch Chunk, Pennsylvania, where Zellner would live the rest of his life. On April 16, 1865, Zellner married Elizabeth M. George (1841-1871). The couple had three daughters and a son together before Elizabeth’s death in 1871. Soon after, James married Sarah Anna Miller (1851-1885), with whom he had another three daughters and a son before Sarah’s death in 1885. James Zellner died at his home in the Fairview Hill section of Mauch Chunk on November 2, 1897 and was buried in Mauch Chunk Cemetery.

During Zellner’s life in Mauch Chunk, he operated out of at least two photography studios, and is credited as being the first operator of a photograph gallery in the town. During an unspecified period of time, he was located at the the corner of Race and Susquehanna Streets. A city directory from 1873 places him on Broadway, opposite the American Hotel. An 1875 property map locates James Zellner at 158 West Broadway, between J. Brelsford and J. Kirstler, though it is not specified whether this is a storefront or a residence. In addition to his work documenting the region surrounding his home, he also photographed a series of images in the American South in the summer of 1881 as a commission for Charles F. Schneur, proprietor of the Switch-Back Bazaar at Mauch Chunk’s Mansion House hotel.

About a third of the images in this collection depict the town of Mauch Chunk and the surrounding region. Mauch Chunk, which was renamed Jim Thorpe in 1954 after the famous athlete Jim Thorpe, was a company town founded in 1818 by Josiah White, Erskine Hazard, and George Hauto on behalf of the Lehigh Coal & Navigation Company. The industrial purpose of the town was to serve as a railroad and coal-shipping center to move coal mined by the Lehigh Coal & Navigation Company to markets along the east coast.

Much of the coal that reached Mauch Chunk was transported via the Mauch Chunk Switchback Railway, which is also well-represented in this collection. The railway was a private line operated by the Lehigh Coal & Navigation Company. The nine-mile long railway was constructed to replace a wagon road and began operating on May 5, 1827. It was a partially gravity powered railway that ran between Mount Pisgah at Mauch Chunk and Mount Jefferson at Summit Hill, where the Lehigh Coal & Navigation Company operated anthracite mines. Initially, the railway relied on animal power to hoist cars up the inclines, but after 1846, cars were hoisted using the steam-powered funicular system seen in this collection. The photographs in this collection document the railway’s use as a tourist attraction and passenger railroad, a secondary use that began in 1861 and became the railway’s primary function after the construction of an 1872 railway tunnel rerouted coal lines. After 1872, the Lehigh Coal & Navigation Company leased the operation of the passenger line to the Central Railroad of New Jersey, who then subleased it to a succession of other private operators until 1933, when declining ridership resulted in the closure of the line.

The majority of the remaining identified images in this collection document scenes from Glen Onoko, a scenic tourist attraction located nearby Mauch Chunk that was and continues to be best known for its nature trails, scenic overlooks, and many waterfalls. A small number of identified images document sites in Summit Hill, Penn Haven, and areas along the Lehigh River. There are fourteen images whose subjects could not be identified.

This collection is divided into five series. In addition to the criteria noted below, images have also been dated based on their appearance in Zellner’s stereoview series, at least one of which was probably published in or shortly after 1888.

The first and largest series consists of fifty-five images that are, or are most likely, of Mauch Chunk, Pennsylvania. The photographs are undated, but often include landmarks that help narrow the likely date range. Most of the glass negatives in this collection have been assigned an approximate date based on the images in this series. The presence of St. Mark’s Episcopal Church in images indicates that the photograph was made no later than 1869; there are no images of the site of the church in which it does not appear. Other notable sites include the Harry Packer mansion, which was built in 1874 and the Soldiers and Sailors Monument, erected in 1886. The collection does include photographs taken before and after the 1882 construction of the Lehigh Coal and Navigation Company office building. Photographs taken both prior to and after the 1888 construction of the railroad station for the Central Railroad of New Jersey are also found in this collection. Mauch Chunk’s second and third courthouses also both appear in this collection. The second was built in 1850 and demolished in 1893; construction on the third was completed on the same site in 1894. The collection also includes a number of photographs from a scenic overlook at Prospect Rock. Graffiti visible in these images has been used to date the photographs to before and after August 3, 1891.

The second series contains thirty-six images of attractions and scenes at Glen Onoko. There are few sites in this series that can be definitely dated to a range beyond the years in which James Zellner was active.

The third series of thirty-two glass negatives documents scenes along the Mauch Chunk Switchback Railway. As they show the railway’s operations as a passenger rail service, rather than a coal-hauling operation, they must have been taken no earlier than 1861, most likely after 1872.

The fifth series consists of fifteen glass negatives documenting people or locations that could not be identified.

Glass plate negatives do not circulate.

These glass plate negatives are undated and are not labeled or otherwise marked to indicate a photographer. They were purchased from a dealer in 1974.