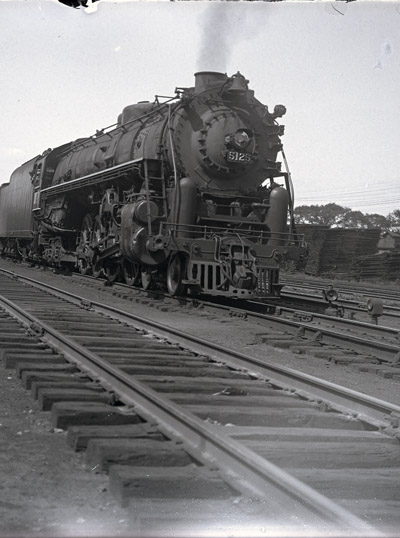 The Lehigh Valley Railroad was a railroad company in the northeastern United States primarily used to haul anthracite coal from Mauch Chunk (now Jim Thorpe), Pennsylvania, to Easton, Pennsylvania. This collection consists of twenty-two glass negatives and one box. Most photographs depict the rolling stock of Lehigh Valley Railroad dating to approximately some point between 1934 and 1948, based on engine numbers.

In 1867 the Lehigh Valley Railroad completed an extension into the Wyoming Coal Field at Wilkes-Barre. Packer purchased the flood-damaged North Branch Canal in 1865 and completed a railroad on its towpath from Wilkes-Barre to Waverly, New York, in 1869, connecting with the Erie Railway to Buffalo and developing a market for coal in the cities of the Great Lakes.

In 1871 the Lehigh Valley Railroad began planning its own route from Easton to New York Harbor. It purchased the Morris Canal primarily to obtain valuable terminal properties in Jersey City. In 1875 the Easton & Amboy was completed to a coal terminal at Perth Amboy. An extension to Jersey City was not completed until the early 1890s.

During the 1870s and 1880s, the Lehigh Valley Railroad secured control over a group of railroads in central New York State, extending its reach to Ithaca, Auburn, and Geneva and to North Fair Haven on Lake Ontario, whence coal was shipped to Toronto and other Canadian cities. The Lehigh Valley Railroad completed its own line to the Buffalo gateway in 1892.

Many of the Lehigh Valley Railroad's predecessor companies in the coal regions also had mining privileges. Between 1867 and 1875, the company greatly increased its acreage of coal lands and leases in the Lehigh, Mahanoy, and Wyoming Coal Fields. Most operations were centralized under the subsidiary Lehigh Valley Coal Company, which was the second-largest anthracite mining firm at the time. In the early 1920s, the railroad relinquished control of the coal subsidiaries following government prosecution of the anthracite railroads under the Sherman Antitrust Act and the Hepburn Act. The company also owned a fleet of ships operating on the Great Lakes, which it disposed of in 1917 under the provisions of the Panama Canal Act.

The company suffered from the collapse of the anthracite industry that began in the late 1920s and accelerated after 1945. The Lehigh Valley Railroad was one of the first large railroads to eliminate all passenger service in 1961. In 1962 the Pennsylvania Railroad increased its interest in the Lehigh Valley Railroad to ninety percent, but it could not provide any meaningful support. With the failure of Penn Central, the Lehigh Valley Railroad entered bankruptcy on June 24, 1970. The viable parts of the line east of Waverly were sold to Conrail on April 1, 1976, and the rest were abandoned. A reorganization plan was approved on July 16, 1982, under which the company was liquidated by sale and distribution of assets.

This collection consists of fifteen glass negatives depicting locomotives and passenger cars belonging to the Lehigh Valley Railroad. The photographer is unknown, but the original box that once held all or most of these fifteen plates is included in the collection. While these photographs are undated, engine numbers visible in the images suggest that these glass negatives were created no earlier than 1934 and no later than 1948, assuming that they were taken roughly contemporaneously. These were the early years of a period of slow decline for the railroad industry, which had suffered during the Great Depression and was by then facing competition from alternate means of transport, such as automobiles and airplanes.

There are an additional seven glass negatives, larger than the first fifteen, depicting a small variety of undated, unidentified scenes. The relationship of these items to the negatives depicting the rolling stock of the Lehigh Valley Railroad is unclear, as is their relationship to one another. These seven glass negatives depict a naval sailing vessel that is probably the USS Constitution, the shipwrecked SS Morro Castle, a group photograph in front a church, and two views of an outdoor natural recreation area. The image of the SS Morro Castle likely dates to 1934, and the remaining six may as well.

This collection is open for research. Glass plate negatives DO NOT CIRCULATE.

This collection was purchased in 1971 as part of a lot that included a number of other small collections.